Just as we have in prior years, we crowd-sourced submissions from all of Bresslergroup for this annual year-end post.

Wearables, which had a strong presence on past years’ lists, are not as prominent on this one, although they do get a mention. Successful wearables in 2016 seemed to focus on incremental improvements (the waterproof Apple watch) or evolved design (Fitbit Alta) rather than on radical innovation. They’re not dead, but it will take some time to reevaluate the category and conduct meaningful design research to identify where the real opportunities lie. I anticipate a mushrooming of specialized wearables in the years to come.

And of course, we couldn’t have a 2016 list without Pokémon GO. Here, in no particular order, are our picks. This year, we went to twelve: 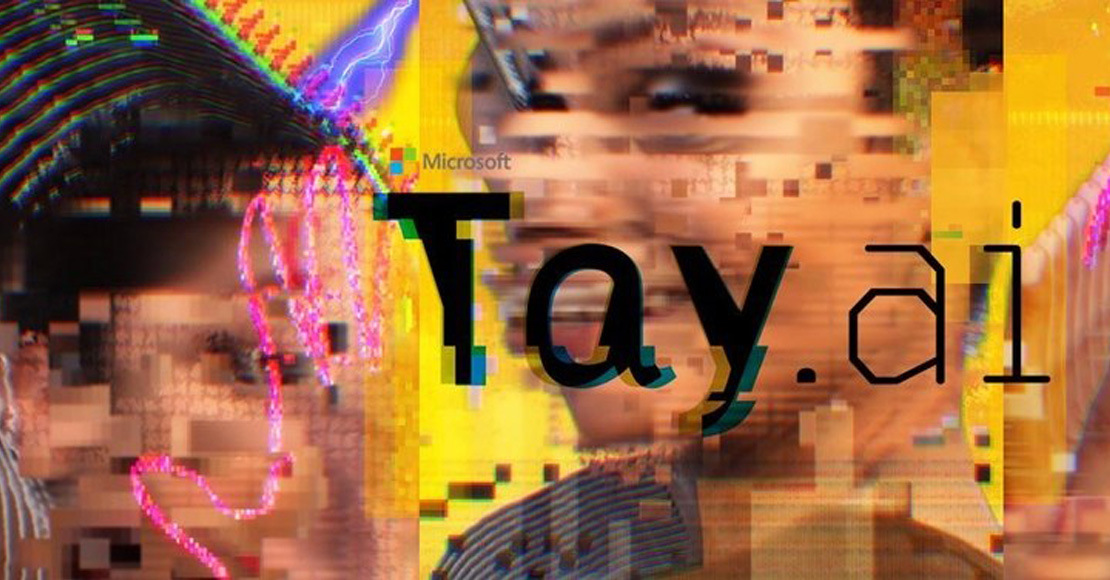 Uber launched an AI research lab. Apple planned to collaborate with the AI community. Fei Fei Li, the creator of ImageNet, was tapped to run a new AI group inside of Google. Amazon invested in AI expertise. Between Uber, Apple, Google, Microsoft, Amazon, and Facebook, natural language processing seems like it could be cracked soon, which could transform how we interact across the board. And thanks to a new Microsoft chatbot, AI showed its potential to hold up a mirror to humanity — and motivate us to be better versions of our IRL selves.  – Bill Horan 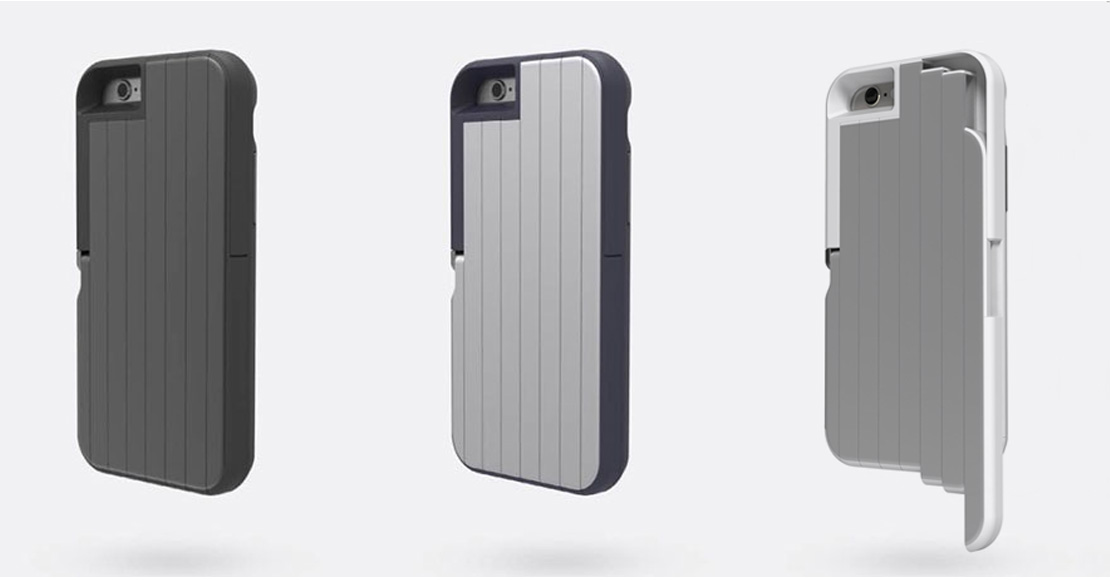 Chinese copycat culture has been around for years, but in 2016 it seemed to reach a new level when competitors began producing knockoffs of Kickstarter products like Stikbox and selling them online before the originals were even funded.

This is a shift that raises questions about product design innovation and IP strategies. When do you share what aspects of a new design, and how do you ensure that your strategy accounts for the insanely fast speed-to-market of copy cats? Is it possible to design something that’s insulated from the knockoff industry culture? Some ideas: Create proprietary software for your hardware, sophisticated marketing and branding, or features that require specialized manufacturing.

It also opens up discussion of an interesting new pathway for product development: Create a Kickstarter based on an idea, and then wait a few months and buy the product from a knockoff manufacturer (rather than developing it yourself). — Conall Dempsey 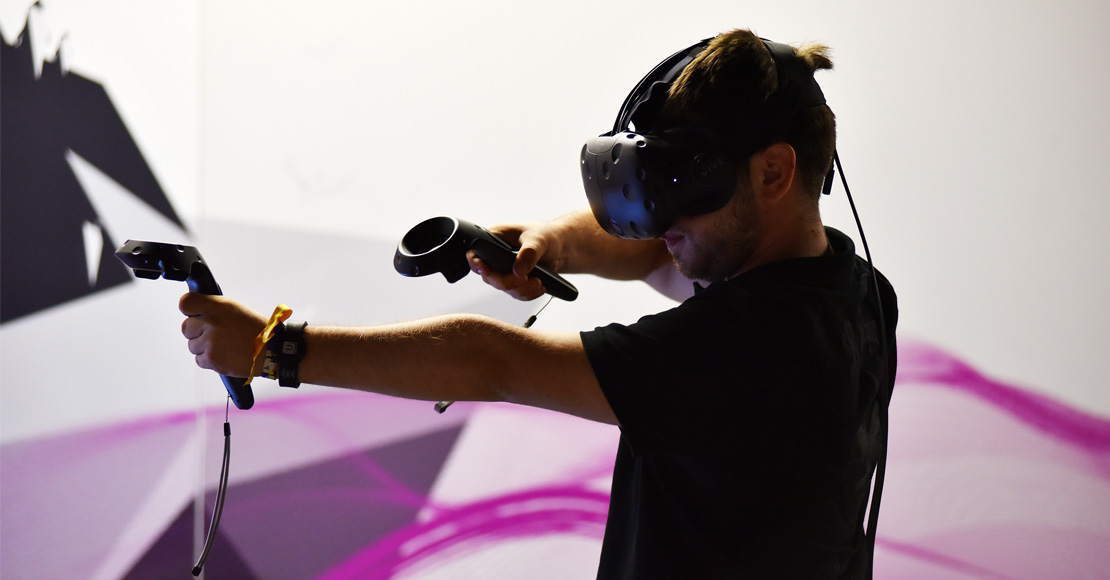 We’re still in the infancy of “free roaming” VR (VR that is untethered from a computer or power source) and although the HTC Vive is tethered, it adds another element of immersion by being one of the first to integrate controllers and positional tracking of the headset. This will allow users to move, crawl, and/or walk (to a limited extent) around and interact with objects (sometimes with humorous results). The impact on the process of product development and user experience in general will be significant. (On a side note, in 2016 I was able to try this out — true untethered VR in a free roaming room with other players. Apparently it’s one of four systems in the world and it was nothing short of amazing.) – Eric Chang

4. We spied wearable cameras that people might actually want to wear?! 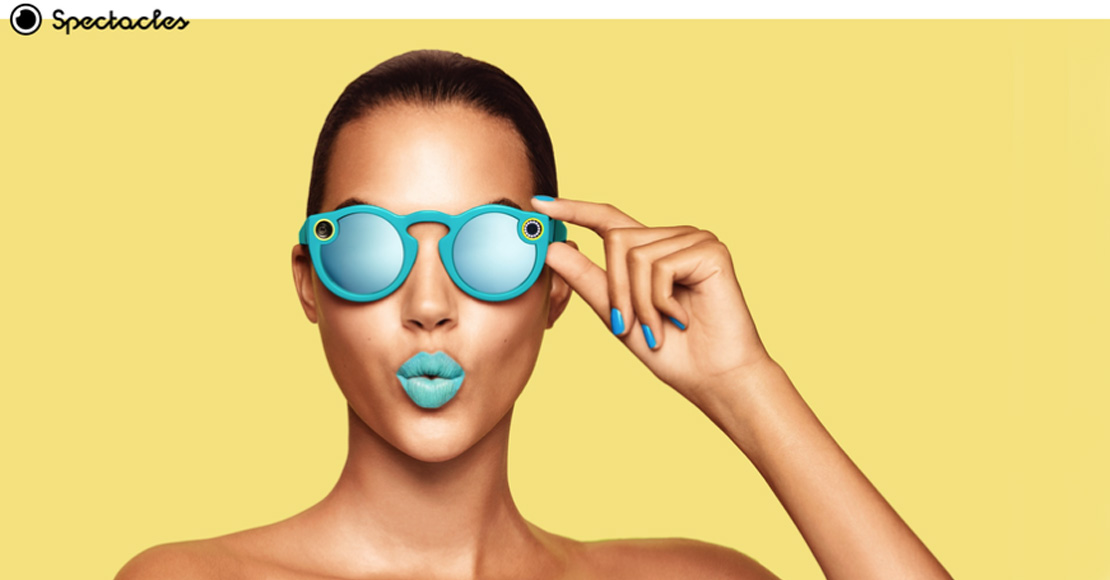 Snap, Inc.’s Spectacles, launched in the fall, are easy to use, the right price, and not dopey looking – which puts them leaps ahead of all the previous smart glasses or wearable camera glasses that came before them. It’s easy to envision the use case — people at events or exploring a new place wearing them and getting great first-person footage without the inconvenience of holding a camera. They’re not going to change the world, but compared to Google Glass, they’re a real product. – JD Albert 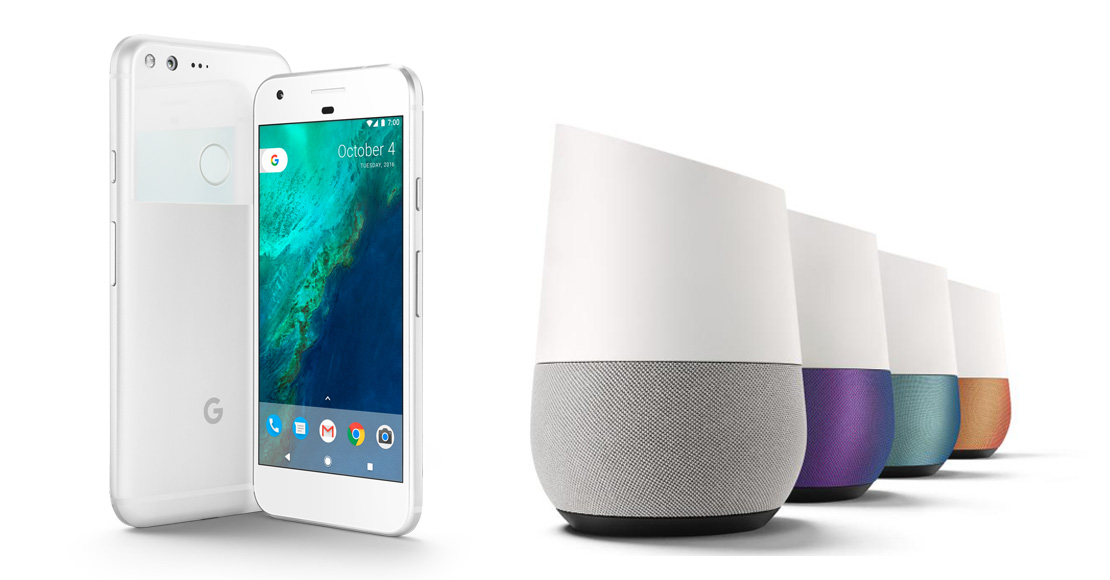 Google’s serious movement into the tangible domain in 2016 is bound to send shockwaves through the industry. Phones, VR headsets, connected speaker/assistants, and WiFi routers, all tied into the biggest name in online search, are hard to ignore. Even more impressive is what’s in the pipeline — cars, ISP solar drones, genomics, fiber, artificial intelligence. … Smart products promise to be much smarter with links to Google’s vast network. – Dan Massam 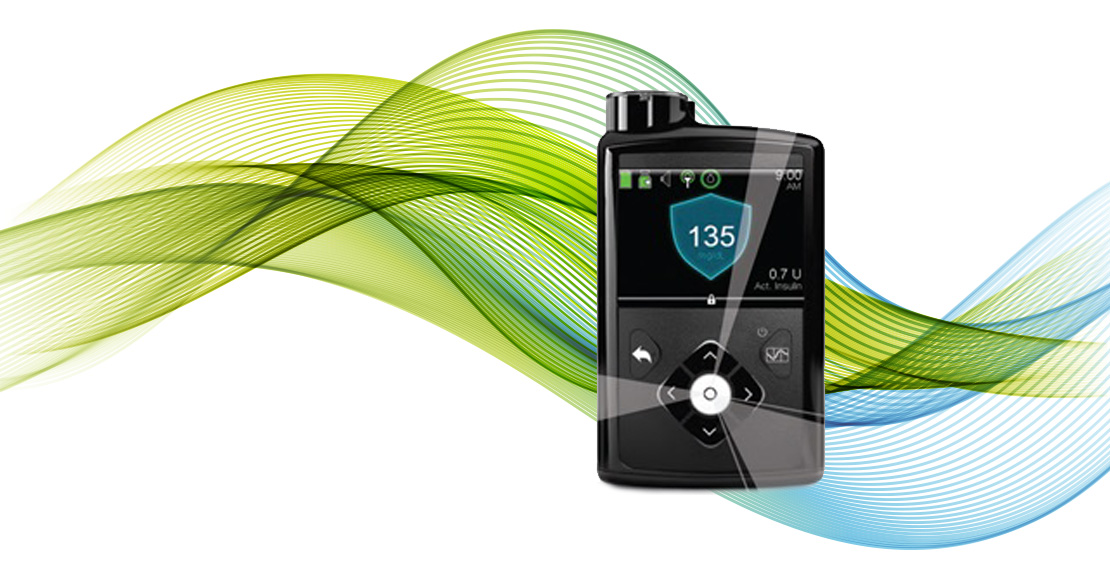 This time last year, several people with Type 1 diabetes were already living on closed-loop artificial pancreas systems.  In 2016 the FDA was pulled to complete reviews by these proactive, unofficial developers and ended up approving closed-loop insulin. For years the FDA has sought ways to account for edge cases during the review process — for example, by enabling easier approval paths for target therapies meant for populations in dire circumstances. And in our post about 2015 innovations that influenced product design, we pointed out how the DIY diabetes movement was a factor in the FDA’s 2015 decision to take a hands-off approach to medical data-sharing tools and apps. By approving closed-loop insulin, they again exhibited their commitment to continuing to evolve this relationship between two entities who ultimately want the same outcome. We applaud the FDA’s continued efforts to collaborate and accelerate innovation. – Conall Dempsey

7. We did the mash. The medsumer mash. 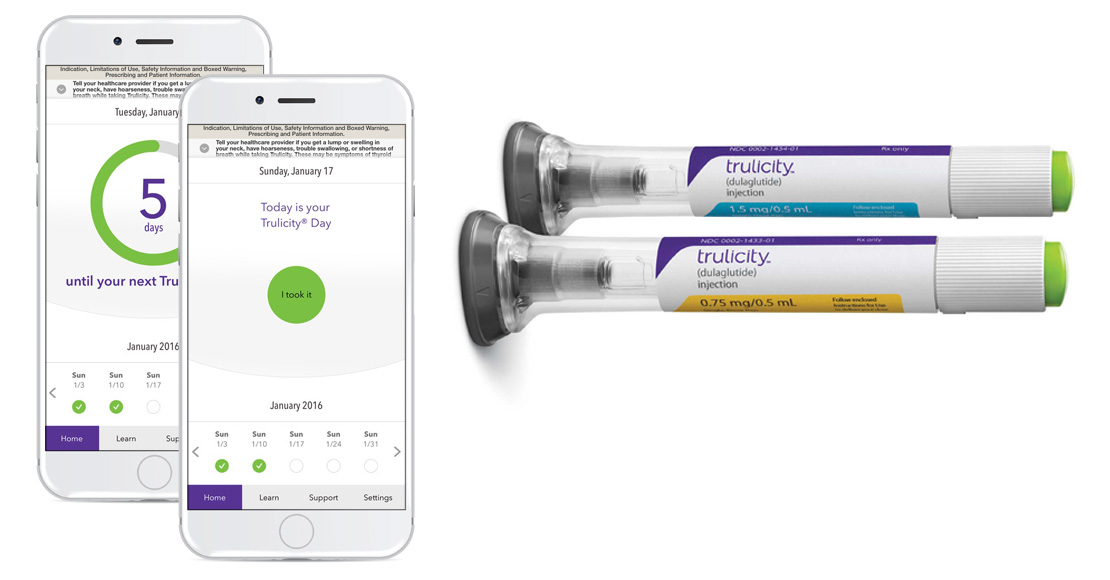 Eli Lilly’s Trulicity, a nice combination of medical hardware, drug, and app integration, is a great example from the diabetes space of how “medsumer,” i.e. the blending of medical and consumer product categories, advanced in 2016. Medical devices continued to look, feel, and act more like consumer devices. As surgeons, nurses, patients, and other users of medical products become more sophisticated through exposure to advanced products in the consumer and electronics spheres, there is an expectation that all products possess a similar level of design consideration. We saw this influence extend to icon vocabulary and interaction patterns, as well as to the increasing adoption of design thinking and the concurrent process (iterate, prototype, test) by the healthcare industry. – Chris Murray

8. A powerful, accessible biomimicry resource launched for designers and engineers. 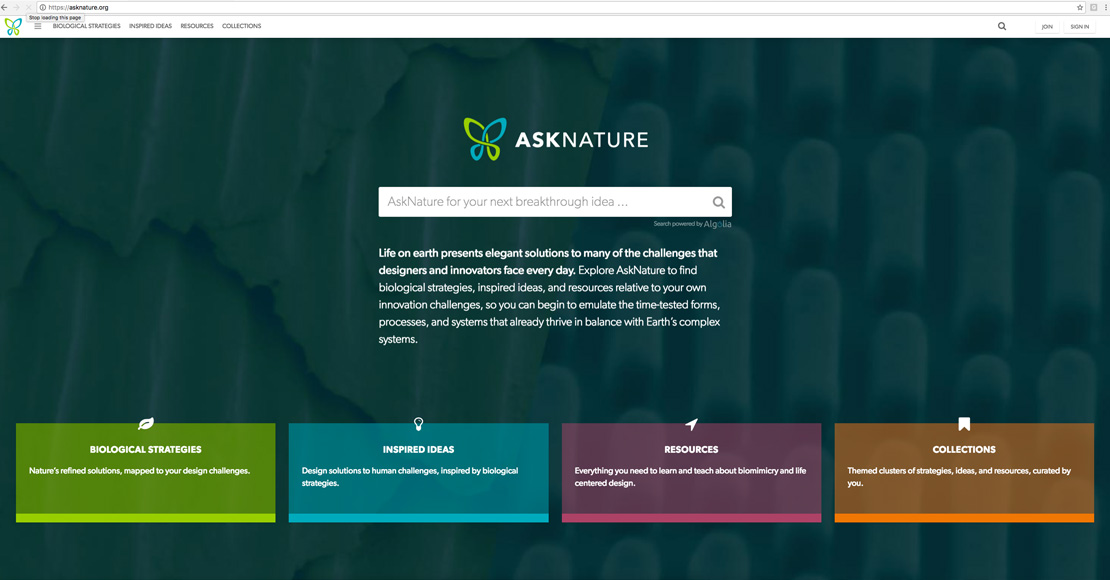 Biomimicry is the practice of applying biological strategies to design problems.  One of the most challenging aspects for non-biologists is to find the appropriate biological model for their problem. The website AskNature.org is a resource for designers and engineers to find appropriate organisms and strategies organized by the function that they perform.  Say your fundamental problem comes down to stress distribution in a part you’re designing.  You can go to AskNature and type in the function “distribute stress.“  The database will return a range of biological solutions including the helical fiber layout of scots pine and the fracture toughened vein structure of locust wings.

AskNature got a major redesign in 2016 that makes it substantially more powerful.  The site navigation is easier to use, search is easier, and the database of strategies continues to grow, currently topping 1,700.  However the most exciting new features have to do with interactions between users.  Registered users can now create and share strategy pages with the world, connect with the AskNature community, curate collections, create groups, and contribute new ideas.  As the site continues to grow, hopefully more and more people will begin to ask, “What Would Nature Do?” – Seth GaleWyrick 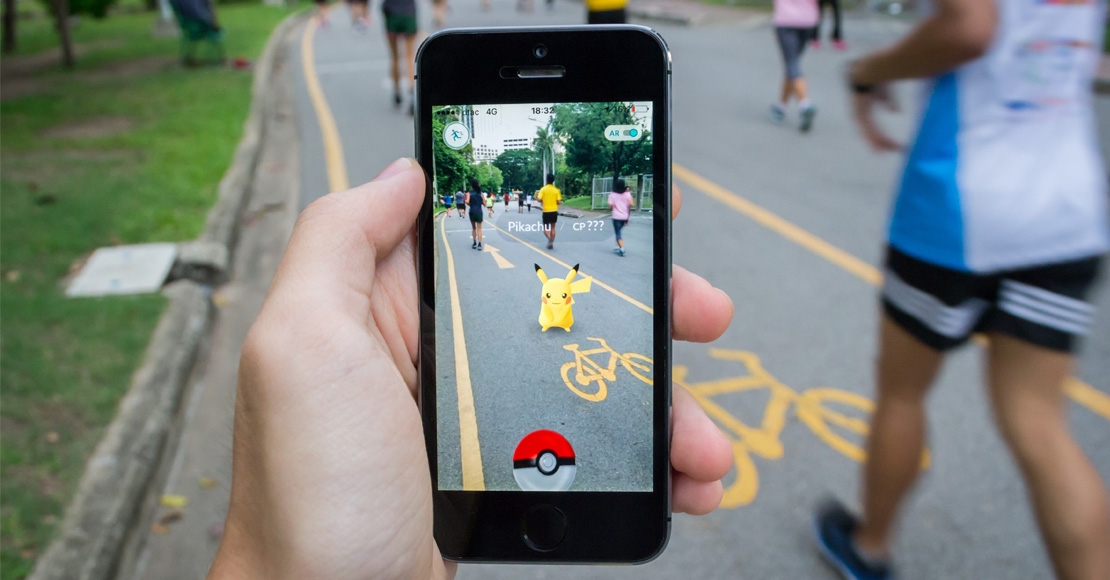 Pokémon GO was probably the most widely used augmented reality product released in 2016, or ever. It changed the way everyone thought about gaming — and it got kids outside. (It wasn’t the first phone-based game that required players to move around, but it was definitely the most popular.) There are plenty of lessons to be learned for app developers and designers from its popularity. Unfortunately, it was also responsible for a spike in traffic accidents, which will hopefully drive further vehicle safety improvements.  – Matt Black, Dave Schiff, Jason Zerweck, and John Kurcheski 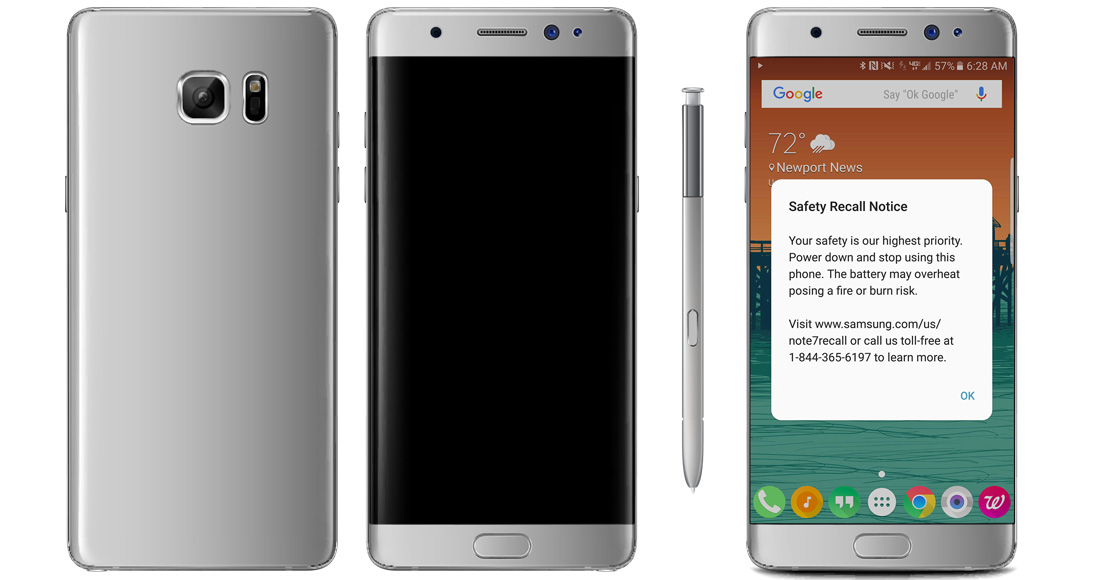 Galaxy Note 7’s propensity for catching fire and/or exploding should have been discovered on the bench, not in the hands of the end user.  Chances are it did not go through enough quality assurance (QA) testing, or its quality assurance process was not rigorous enough. This, along with the Hoverboard fires of 2015, add up to a great argument for all manufacturers to follow Samsung’s example by reassessing and investing in more rigorous QA testing. – Matt Black

11. Automated manufacturing continued to increase in complexity and scale. 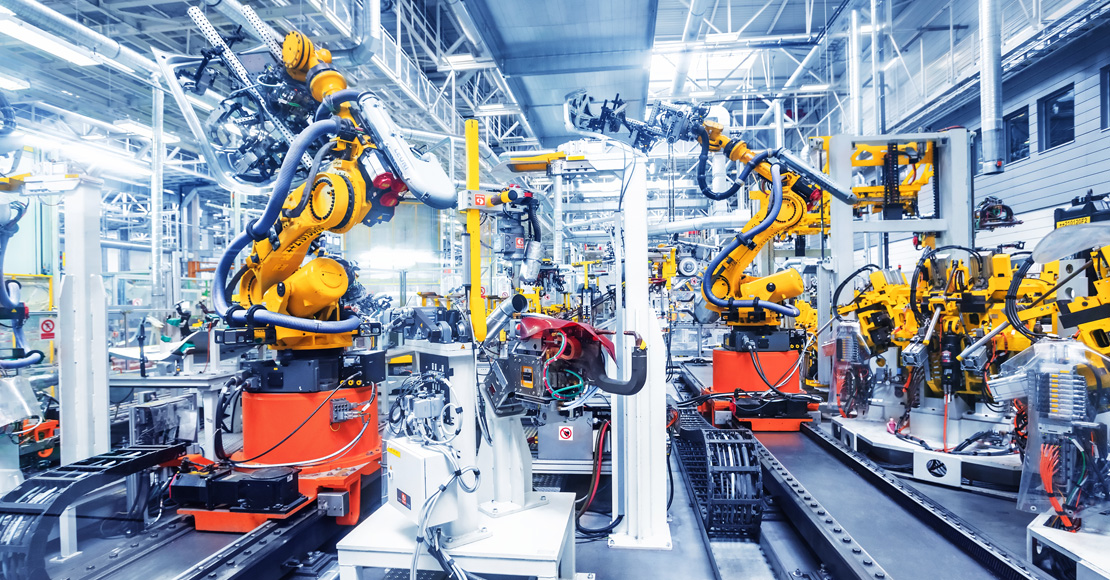 Foxconn, the huge Chinese manufacturer of electronic devices, confirmed this year the replacement of 60,000 factory workers with robots. Tesla has continued to make huge investments in automated (robotic) manufacturing of its cars. The trend of building machines to build machines will continue to drive the growing development and adoption of industrial Internet of Things applications. – Kevin Murphy

12. And back to AI: Watson solved new and mighty problems. 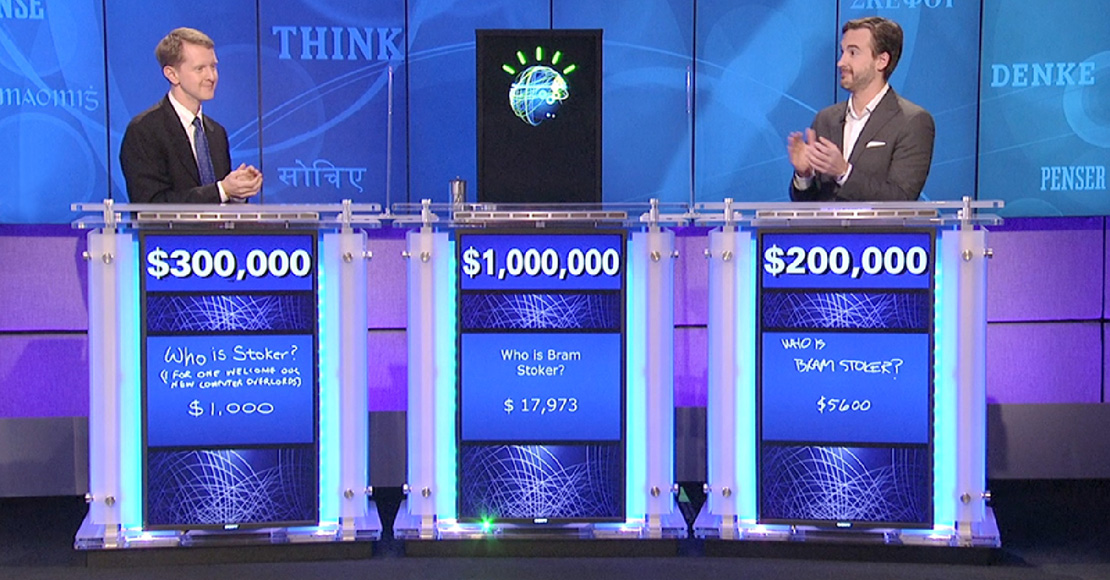 It’s only fitting to begin and end a list about 2016 with AI. While Watson isn’t technically new, in 2016 it showed that it can successfully analyze data and literature to aid in more effective cancer treatments. Watson was able to suggest treatment for a patient in Japan who was terminally ill by analyzing her genome. Within 10 minutes. This was the first recorded instance of an AI system saving a human’s life. This is a glimpse of the future, where “deep learning” is poised to enable automation on a much larger scale and put many of us out of our jobs. – Eric Chang

What do you think were the most impactful innovations of 2016? What did we miss? Connect with us on Facebook and Twitter to let us know.