Accelerator launched in late summer, and it’s been a busy and prolific few months. We were curious about our most popular posts so we tallied the numbers. Here are the ones that you, our readers, read and shared most frequently: 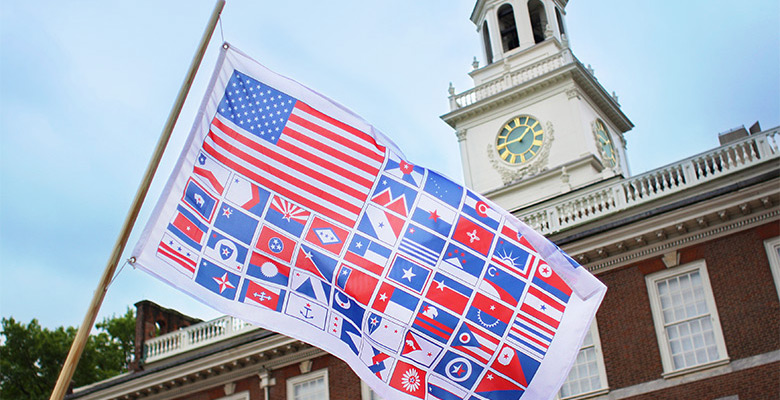 1. United We Stand and ReFlag, by Ed Mitchell

Ed Mitchell’s ambitious side project — to redesign all fifty state flags according to the “official” rules of good flag design and in a manner that represents the United States as a cohesive nation — went viral when a story by Kyle Vanhemert on Wired.com triggered an avalanche of press, praise, and critique. Press mentions from national and local outlets rolled in, as did shares and social media hits that we’re still counting — including some major action in Reddit’s vexillology forum. Mitchell was inspired by an episode of 99% Invisible, the design podcast by Roman Mars.

We followed up United We Stand with ReFlag, a company-wide redesign of the Philadelphia city flag for DesignPhiladelphia. It garnered a cover story in Philadelphia Weekly and a piece on WHYY’s NewsWorks, among other press. It also continues to be the second most popular blog post on Accelerator.

2. How the Internet of Things Is Changing Industrial Design, by Thomas Murray

Industrial Designer Tom Murray finally got his landlord to fix his air conditioning by linking a device called Twine to a Web service called Thingspeak to record a real-time graph of the wild temperature fluctuation in his new apartment.

He used this experiment as a jumping-off point to write about the Internet of Things (IoT) and the ways it is likely to alter industrial design. We’re still in the Wild West phase of the IoT, and tinkering with Twine can give us a glimpse into the movement’s future potential.

3. Four Steps to Choosing the Right Color in Product Design, by Chris Murray

Chris Murray, our Director of Industrial Design, presented at 2013’s IDSA Northeast Conference about Bresslergroup’s method for choosing the right colors for product design. Rather than basing these decisions on emotion, he says, back them up with user research for better success. This post distills his advice into four actionable steps. Watch the webinar to learn more.

More form; less storm. Director of Design Mathieu Turpault picks a side in the brainstorm debates and roots for structure by illustrating how Bresslergroup’s structured ideation process yielded creative solutions when we mentored a group of students from U. of Penn’s Integrated Product Design program earlier in 2013. This post was a companion piece to Turpault’s post on Core77 about that same project.

5. Industrial Designers, Design Your Future #1: Be Tactical, by Mathieu Turpault

Don’t fear change, says Turpault. Globalization and emerging technologies may be transforming product design, but “major transitions usher in major opportunities for the nimble and forward-thinking.” Turpault’s three-part “Design Your Future” series outlines key opportunities for industrial designers who want to thrive and survive. Be Tactical, the first installment, explains why industrial designers need to hybridize by learning interaction design.

This post also features the first of three illustrations by graphic designer, Ariel Esser, that show the transformation over time of one young industrial designer from hapless to happening. (See that transformation and read more of Mathieu’s advice in Part 2, Be Nimble, and Part 3, Be Flexible.)

Thanks for reading and for making Accelerator a success in 2013. We look forward to exploring these topics and many more in 2014 — happy new year!