(Our “3 Top Tools with” series looks at the everyday work of Bresslergroup’s strategists, researchers, designers, and engineers through the lens of their top product design tools. It was inspired by our collective glee over our recently expanded workshop and lab and by Core77’s Tech Specs series.)

As a kid in post-Soviet collapse Uzbekistan, I devoured sci-fi anything I could get my hands on. When I was 12, I got a bootleg VHS tape of The Fifth Element from a classmate.

I obviously loved the movie, but it was also the first time I considered there are people who design all the mundane minutiae people use to live their lives. In the movie I saw characters get mail, take showers, travel (the ordinary kind of travel, not an epic space voyage), get take-out … and for some reason, it was tremendously inspiring — that the future is not just for heroes, but it’s for all of us.

I decided that this would be my dream job — imagining how everyday people might live in the future. Of course I didn’t know back then that this was called “industrial designer.” 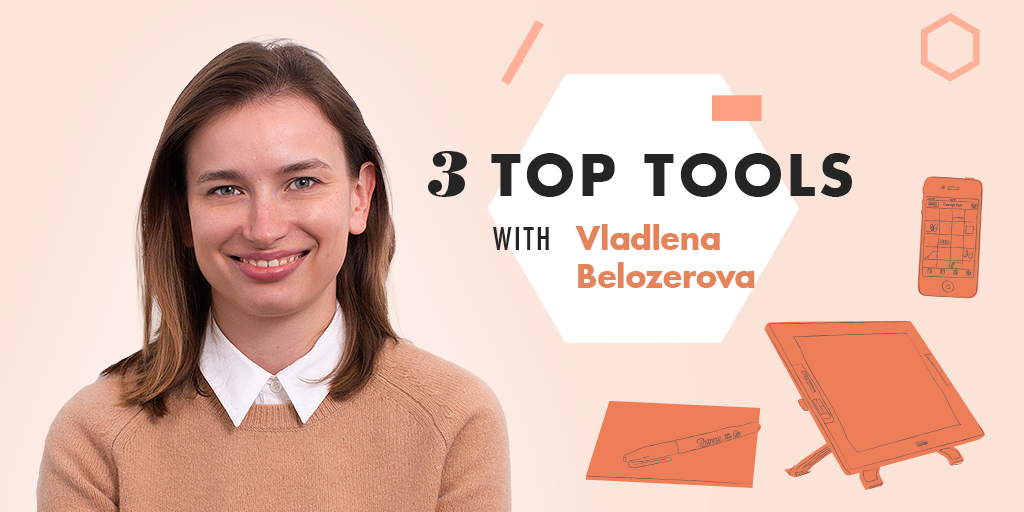 There was nothing much to do when I was a kid — we had Turkish TV for a bit with Turkish Sesame Street, but even that got cut eventually. I had to make my own fun. Building my own toys and figuring out how to play on my own got me into a tinkering and creative mindset. Fastforward a couple of decades and I’m still tinkering — now at my “dream job” and with much different tools than the ones I used back then.

When asked to come up with my top three, it was not hard to choose the ones I rely on most: 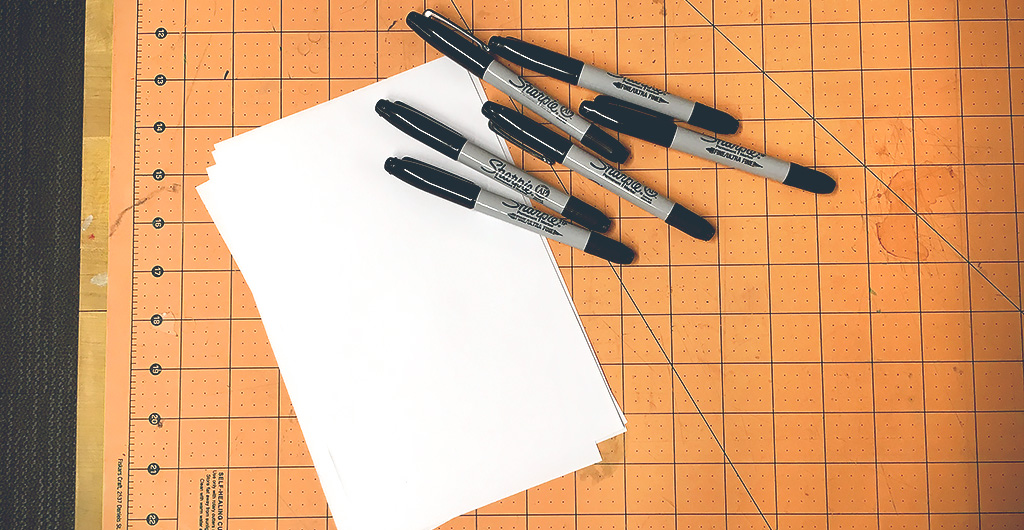 What’s bigger than a Post-it, smaller than letter-sized paper, and saves your life when you’re trying to generate and keep track of a million concepts during brainstorming?

I learned about half sheets at my previous workplace where I quickly discovered why they’re so much better than letter-sized paper. The vast expanse of an 8.5 x 11″ page intimidates inexperienced brainstormers, who then talk themselves out of it (“I don’t know how to draw!”). People trained in design tend to put multiple sketches on a single sheet (you are taught to “fill a page with sketches” in design school), making it much harder to isolate individual ideas during sorting and other decision-making exercises.

Half sheets force you to be more succinct and to communicate the essence of an idea, without getting bogged down by details. Sharpies make your notes and sketches pop and make them easy to read across the room. At the end of the day you need to step back and see the whole picture, see how all of the pieces fit together.

After a brainstorm, we rank and sort ideas into groups, and then we batch-scan them. Depending on the project you might hold onto your half sheets for quite some time. By the end of a long project, the sheets can get fragile from being pinned over and over during many months. This is why you always scan them. They can get lost or torn, and sometimes you need to make a copy because the idea will fit into several categories.

After you live with half sheets for a while you find more uses for them. Right now I like them for planning out the flow of a complex presentation. Each half sheet acts as a mini slide…I lay them out and shuffle them. After staring at a screen for so long, it’s such a delight to do some of this work the analog way.

*(To make half sheets, simply cut the standard letter-sized sheet in half. You can cut a stack with a paper cutter, ask folks at a copy shop to cut a ream for you, or work with your paper supplier to see if they can deliver a few reams cut. And of course, one can always fold a letter-sized sheet in half and tear, which comes in handy when you run out of half sheets mid-brainstorm.) 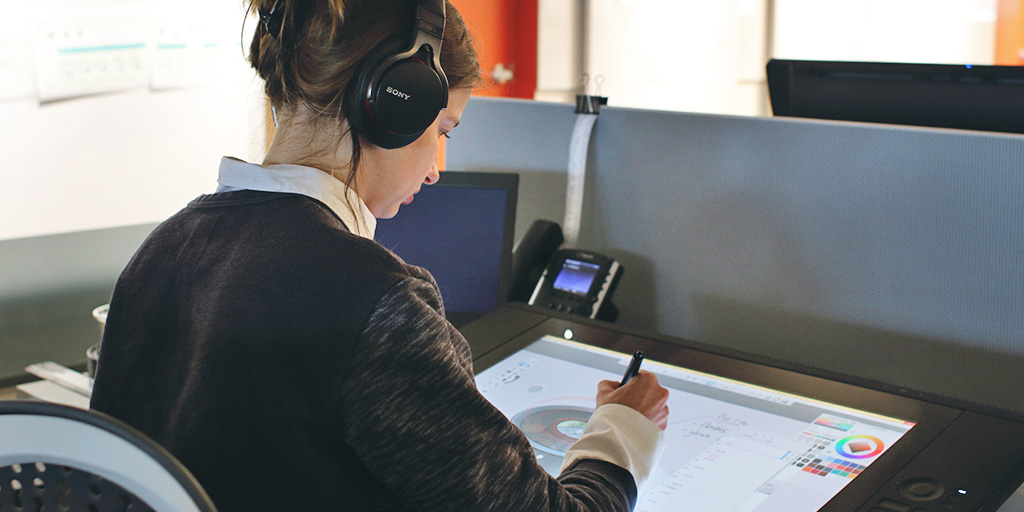 Before Cintiq I used a Wacom tablet. Before that it was markers with marker paper. I started using Cintiq at my first job right out of school in 2005. It’s better than a Wacom, because you can see the lines you’re putting down. There’s no parallax. And unlike with the markers, there’s the undo button.

I’ve used it for so long and it’s such an essential tool for a modern designer, I have a hard time identifying how it has changed the way I work because it’s literally the only way I have ever truly worked.

In a pinch, I can use other tools, but Cintiq + Sketchbook is like breathing at this point — completely reflexive. I’d miss my shortcuts and ellipse guides. 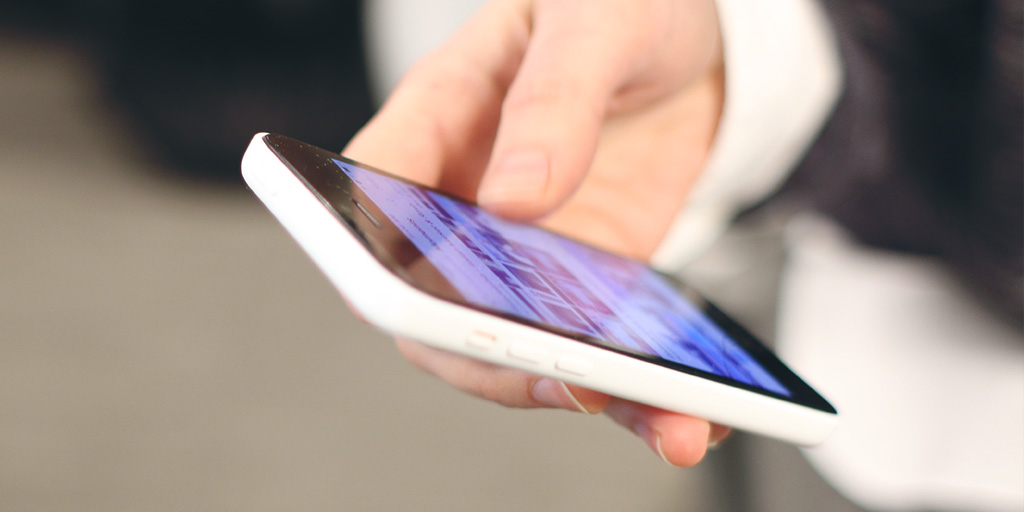 Almost all the photos on my phone are of whiteboards, Post-it sorts, concepts, store shelves, meetings, products … I use it for reference photos, inspiration photos, reminders, research photos, to-do lists, documenting meetings. Because of my smartphone, I can focus more on interacting with clients during meetings. Instead of having to copy whiteboard notes, I know I can just take a photo and go.

Before I got my first iPhone, I used to take a lot more notes and carry a real camera. I’ve used other phones to take photos in the past, but they didn’t exactly make it easy to work with the images. I’m a visual person — pathologically so. I even take screenshots of emails for quick reference. It’s easier for my eye to pick them out in my camera roll.

I actually love using the phone combined with the Cintiq. Whenever I need to draw a hand holding something intricate, I draw the part, zoom it out to be true size, place my hand on top of the screen as if I were using it and snap a quick photo. Then I bring the photo in, trace the hand — and done.

(Researchers and engineers and designers, oh my! Read the other entries in our 3 Top Tools with series to learn about other top tools for product design across Bresslergroup’s disciplines.) 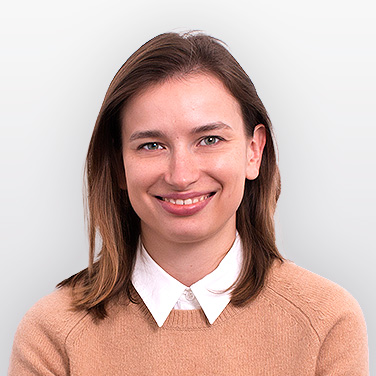 Vlada loves the steady stream of new challenges, inspiration, people, and learning opportunities — and fresh excuses to get lost in Wikipedia — that come with being a consultant, something she has done for most of her career. Vlada studied industrial design at the Rochester Institute of Technology.