As 3D printing technology comes down the cost curve, more people are buying their own machines for home use. Mathieu Turpault touched on this in his series called ‘Industrial Designers: Design Your Future’ on the future of the discipline. In part 2, “Be Nimble,” he wrote:

I’ve read forecasts of local 3D printing labs where everyone will go to make their own products or print out replacements for broken ones. But I think that argument builds on fear more than anything else. You can already figure out how to repair anything on your own, but do people take the time to do it? Do they mend socks, fix furniture, or tinker with carburetors? Even with all the resources at our disposal, the majority of us are more likely to buy a new one or bring it to an expert.

I may be in that majority — I never mend socks, but the designers and engineers at Bresslergroup are not. They do frequently build furniture and tinker with carburetors. We have 3D printers for prototyping in our shop, but a bunch of early adopters on staff have their own models for extracurricular use. Most opted to buy kits and assemble the printers themselves.

I was curious about their 3D printing lives so I asked some questions to find out which printers they chose and what they print. In addition to parts and prototypes for entrepreneurial ventures like the Raspberry Pi B+ and Camera Case  and user-friendly FPV racing drone, our at-home makers are turning out plenty of household parts, trinkets and toys, gifts to amaze and delight relatives, intubators for patients at CHOP,  and even the occasional Halloween mask: 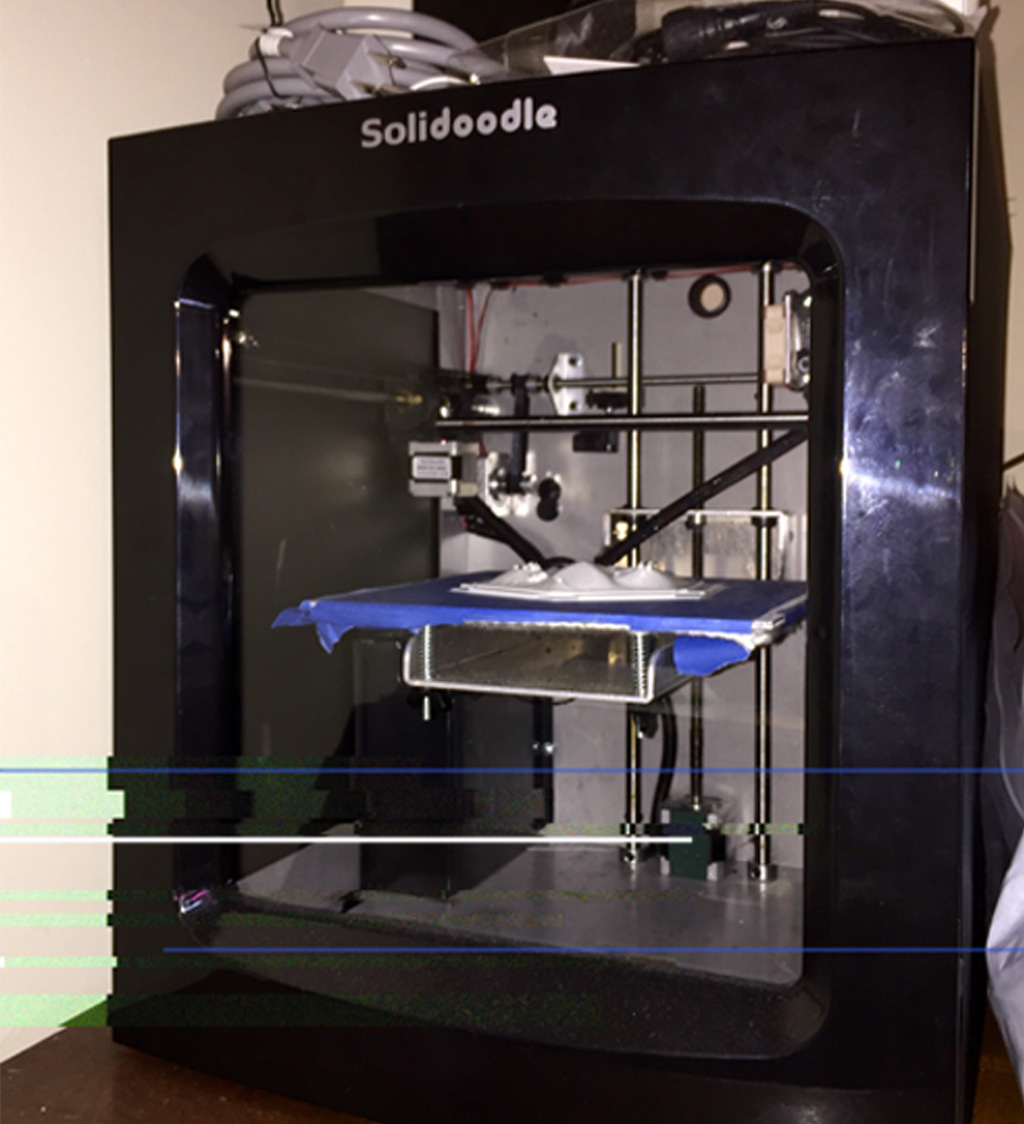 • Why this model?
It was a $700 machine about to be phased out by a new model so it was on sale for $120. I had heard only good things about the brand up while doing my research. Got lucky.

• Why did you get it, and what do you use it to print most?
I got it to design and build project enclosures and for personal projects. For example I built a range finder for my car. It lets me know how close something is when I’m backing up. I needed a water-resistant case for all the electronics that blended nicely into my car. Printed one.

• What’s the weirdest thing you’ve printed?
I printed the Obama Llama for my uncle. This wasn’t my design — just a present for my uncle who is a BIG Obama fan. I thought he would appreciate it. I also printed a miniature bust of Teddy Roosevelt — he is my favorite president, and when I was tuning and calibrating my printer it was the first model I used to get things just right.

• Did you name it?
My printer has no name sadly. But now that you ask, she does resemble a Gertrude to me… Gerty, I like it. 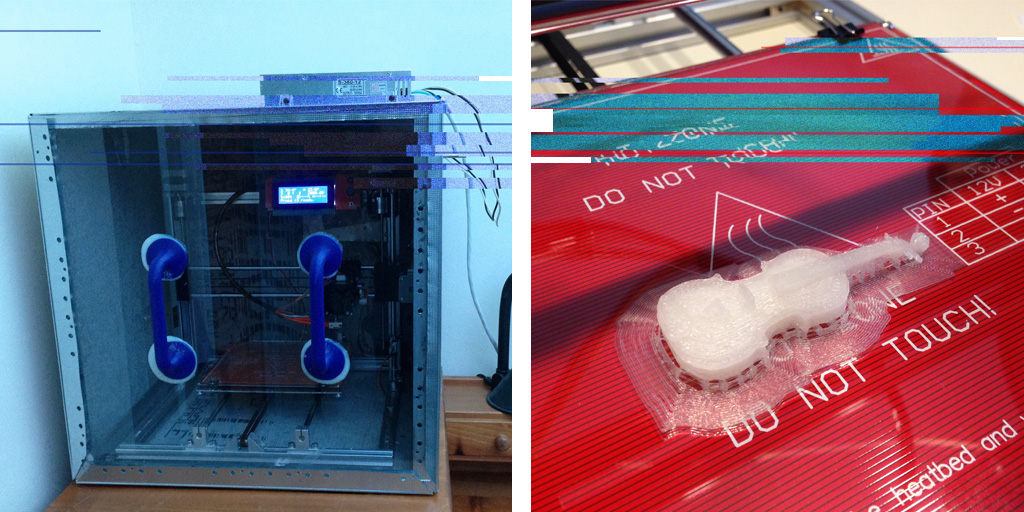 • Which model do you own?
An aluminum framed version of the “Prusa I3” design sold by Folger Tech. The printer comes as a $270 kit that needs to be assembled. After I built it, I added a cement board enclosure for sound and fire resistance.

• Why did you pick this one?
It was recommended by a coworker. I wanted to get into 3D printing without spending too much money. Sub $300 was my budget.

• Why did you get it?
Since I have CAD available to me (SolidWorks from work, or Fusion 360 because its free), I thought it would be cool to make plastic parts as replacement items for ideas around the house.

I’d rather spend two hours designing and printing a knob than go to Home Depot for an hour and spend ten dollars.

• What do you use it to print most?
Things for a coworker’s quadcopters. Light fixtures for another coworker. Ice cube trays, toy trains, pistol grips, camera housings, shot glasses.

• What’s the weirdest thing you’ve printed?
A small violin (pictured above) – it’s a trinket for my brother.

• And the most useful thing you’ve printed?
A tightening knob for my pole saw. 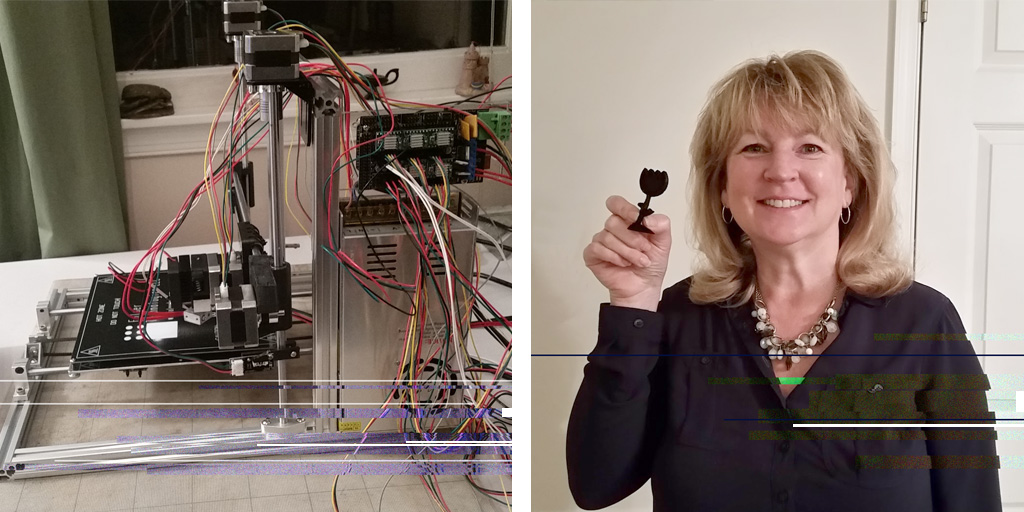 • Why did you pick this one?
Jason Z recommended it, and I did not research others. The price was right and his parts look good.

• Why did you get it in the first place?
It’s a father-son project. Just for fun and possibly a new hobby.

• What was your first print?
A black tulip – I gave it to my wife (pictured above). 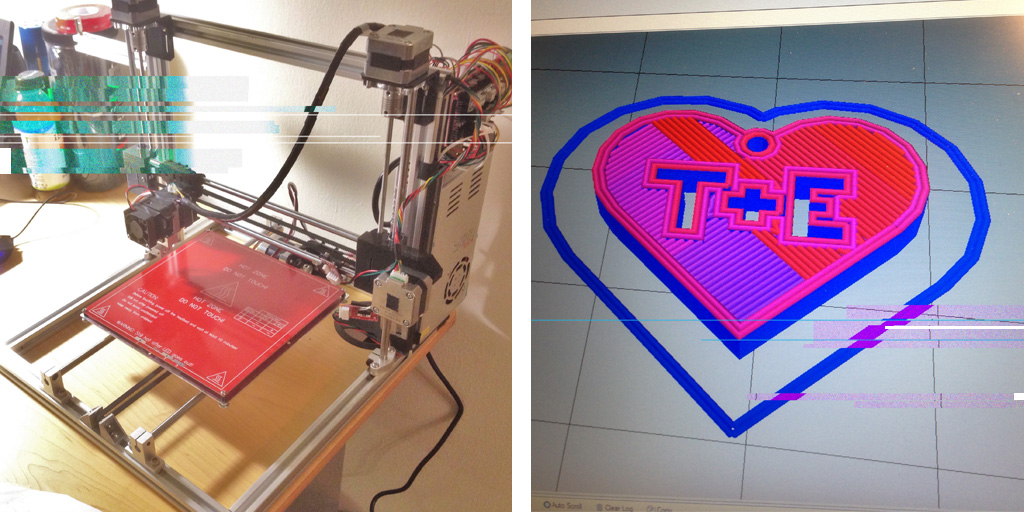 • Why did you pick this one?
It was a Christmas present from my wife … but I chose it because it was the least expensive with very good print quality.

• Why did you get it, and what do you use it for?
Cheaper prototyping for my drone frame development. Mostly I use it to print Über Design Ü180 parts!

• What’s the most useful thing you’ve printed?
A heart with T+E written on it (pictured above) that I CAD’ed up in like two minutes. Useful because my wife automatically thought the printer was worth it after I printed it out for her. 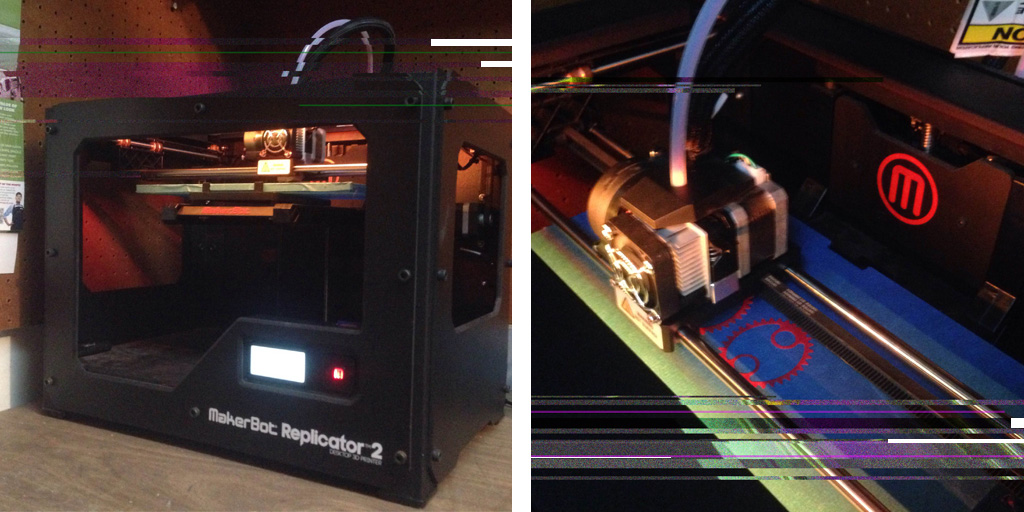 • Why did you pick this one?
I interned at MakerBot one summer, and I knew the Replicator 2 was a really reliable printer. I also got a nice discount.

• Why did you get it?
I’ve always enjoyed building things in my spare time, so this seemed like a great way to have fun and build things. It also was significantly cheaper than paying for the other 3D printers I had at my disposal at the time.

• What do you use it to print most?
Can’t say I consistently print any one thing – I like using it for utility, though. I’ve printed a new handle for my dad’s lawn mower pull cord (it held up!), camera mounts for my quadrotor, a hex nut screwdriver, and the central tower for my coworker Samson’s bartending robot.

• What’s the weirdest thing you’ve printed?
My friend and I got involved with some pediatric doctors at CHOP and entered a competition at the Society for Technology in Anesthesiology. The challenge was to create an interface for printing customized Williams intubating airways to be used for children with abnormal anatomy. So, we ended up building a website  and printed a ton of airways. Before this, I had never heard of an intubator before!

• The most useful thing you’ve printed?
I think the intubating airways were both the weirdest and most useful thing I’ve printed, really. Although recently I started doing some prints with open source 3D printable hand prosthetics. I’m building a test hand, and if it’s up to snuff, I’ll get matched with people who would like to have a 3D-printed hand! I’m pretty excited to get involved with this group, Enabling the Future, and also start working on new designs — both mechanically and electrically. 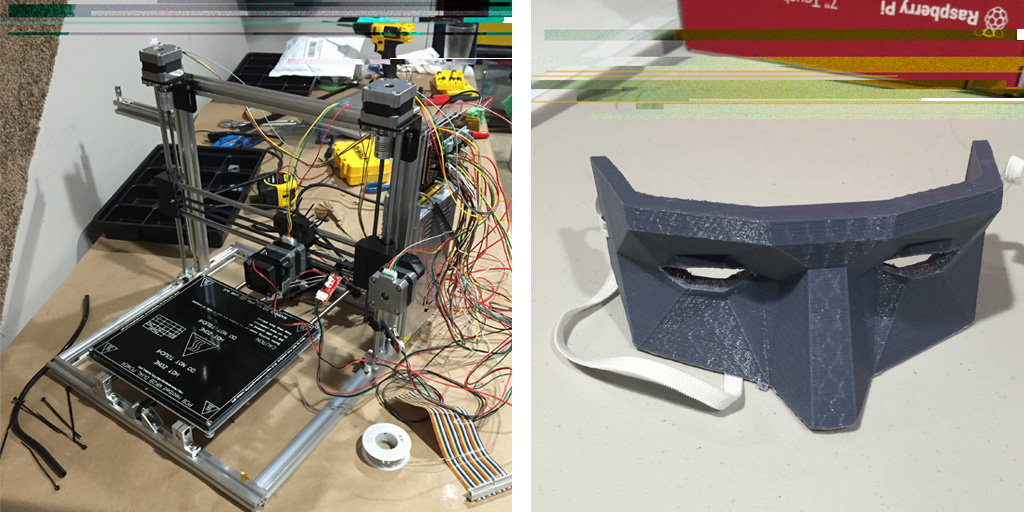 • Why did you pick this one?
I asked a colleague and took a chance because it was cheap. I saw some parts that he printed and was impressed with the quality. There were other kits at similar prices but I would rather trust a referral from someone I know.

• Why did you get it?
To play around with. I also thought it would be nice to prototype with it for my next Kickstarter. Mostly I use it to print household objects. (My wife loves having things designed on demand. Her favorite thing I’ve printed is a holder for our fireplace remote.)

• The weirdest thing you’ve printed?
I printed a mask for Halloween (pictured above). I downloaded the file from Thingiverse.

• The most useful thing you’ve printed?
I printed prototypes for my Kickstarter (in the movie above). It was super-helpful to be able to try something out quickly. My printer can’t print very accurate or high res parts, but for quick and dirty models it works well.

• What did you name it?
Guttenburg. 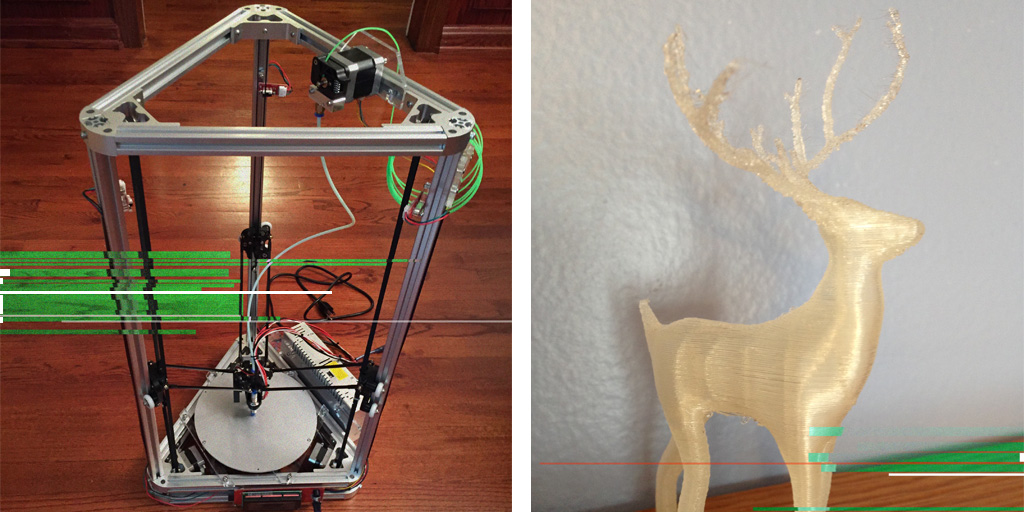 • Why did you pick this one?
Low cost, others’ recommendations, and build area size. I researched other open source printers.

• Why did you get it?
To get a better understanding of the space, and to build low cost parts for my personal projects – and for sailboat, kayak, appliance, etc. replacement parts.

• What do you use it to print most?
Toys for my nephews.

• And the most useful thing you’ve printed?
Replacement hatch knobs for the sailboat.