Accidentally sticking yourself with a syringe needle used to be uncommon; but, 15,190 people in the U.S. managed to do so with epinephrine autoinjectors alone between 1994 and 2007 (and those were just the reported incidents) according to Simons, et al. (2010 Journal of Allergy and Clinical Immunology). These autoinjectors are the devices used by people with life-threatening allergies to stop an anaphylactic-shock reaction in its tracks.

Since their invention in the 1970s, these epinephrine autoinjectors have grown in popularity because of their life-saving capabilities and a continuing increase in allergies. The frequency of accidental sticks rose in the later part of the Simons, et al. study period, at least in part due to their proliferation. Also note that teens bore the brunt of these inadvertent injections (median age: 14 years), driving home the point that these products are in the hands of minimally trained patients and their lay caregivers. Now autoinjectors can also treat other conditions ranging from rheumatoid arthritis to opioid overdoses.

The Rise of Consumer Medical Devices

Cost pressures are pushing other kinds of medical devices into the hands of patients and lay caregivers in the home environment, too. Other common devices for home administration of drugs include inhalers for asthmatics, and patches to administer painkillers and anti-depression medication through the skin.

The consumer medical device market is growing in parallel with spending on home healthcare, which rose from nearly nothing in 1960 to more than $78 billion in 2013. Insurance companies, healthcare providers, and patients are realizing we can treat many medical issues at home and avoid expensive and often inconvenient visits to the doctor’s office.

With this dramatic increase in the number and types of medical devices being designed for use by untrained or minimally trained patients, it is natural that we treat these devices more like consumer products. In fact, aside from the prescription, pharmacy fulfillment, and the insurance companies’ grope for control, these really are consumer products. To be designed for the utmost safety, they need to be easy to use.

Unfortunately most of the companies making them fall low on the Usability Maturity Ladder – I’d assign them to the lowest “Usability as a Burden” rung. As someone with extensive experience in both consumer product and medical device design, it’s clear to me that this needs to change. For usability and safety’s sake, we should approach home health devices the same way we approach consumer products.

The bible for usability in medical devices is the FDA’s draft guidance on applying human factors and usability engineering, which provides methods for testing to ensure that a medical device is safe and effective, but does not tell companies how to design their products. We think that’s the right approach for a regulatory authority; but medical device companies will also boost usability by adopting these consumer product development practices:

The best first step is to do a good deal of contextual inquiry (or “ethnographic research”) to closely observe the group who will be using the device in order to unearth their unmet needs and desires. There are always interesting surprises.

Ethnographic research, from observing surgeons at work to riding in the shoes of mountain bikers, unearths surprising opportunities.

For example, while I was at Kodak, the engineers and designers working on a wearable, mountable video camera were obsessing over image quality. But our ethnographic research revealed that competitors’ mounts were the weak point. The small group of pro and semipro mountain bikers I rode with lost two cameras in our first ride down the mountain. That knowledge was invaluable – image quality is irrelevant if you loose the camera. The engineers knew then to focus on making a better mount part of our design.

Bresslergroup uses a structured ideation technique, like brainstorming but more focused, to come up with innovative ideas. We structure our sessions around specific problems or unmet needs that surface during upfront research. 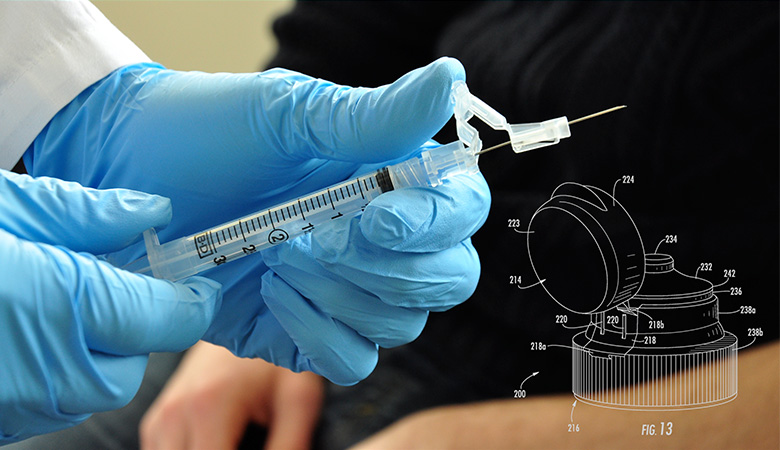 For example, one ideation session had some of my colleagues designing a method to prevent accidental needle sticks from used syringes. One of our designers brought a hinged shampoo-bottle cap to the ideation session. His inspiration became the solution: a hinged piece of plastic that attaches to the syringe. The user snaps it shut with a single finger, covering the sharp end of the needle immediately after use.

Working with a user advisory panel is one technique we’ve used effectively. I was first exposed to this method while designing fighter jet cockpits – we would assemble a panel of “Jet Jocks” to advise us and critique our designs. Working with the software development team, we could sketch some head-up display symbology on a whiteboard and fly it in a simulator the next day.

Since then, we’ve applied this notion of assembling a panel of expert users on a number of different products, from professional cameras to breast pumps for nursing moms. It seems like a natural fit for medical devices intended for home use, where people suffering with a specific medical condition might be the best people to help inform the design.

4. Do usability testing early and often.

Cautionary tale: When I worked at a well-known manufacturer of office imaging systems, we committed to shipping a gazillion desktop inkjet printers to a big retail client on a specific date. Due to a variety of constraints and a poor mindset, we waited until the end of the design process to do the usability testing, and got the results back just days before the printers were to be shipped. 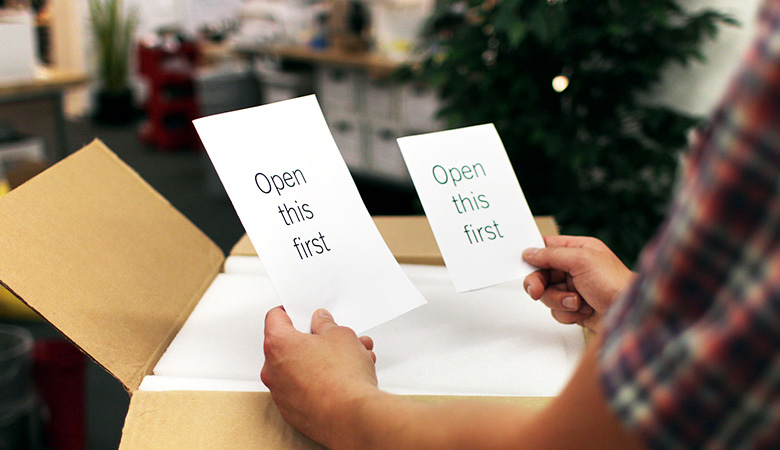 Open this first. No, open THIS first! (This is what happens when you wait till the end of the development process to do usability testing.)

To our horror, the printers turned out to have a huge usability problem. A sequence error that was easy to make while setting up the printer would fry the controller, turning the thing into a giant paperweight. And all of these printers were sitting on the loading dock ready to go out, already sealed in their boxes. Our solution? We wrote a new set of instructions and spent the weekend stuffing them into the boxes. The envelope said ‘Open This First.’ So we had two pieces of paper in the box that said ‘Open This First!’ People had a 50-50 chance of opening up the right instructions.

A fiasco like this should never be allowed to happen; but it can happen all too easily if usability testing isn’t built into the design process early and often. Without usability testing, you’re likely get to the final design phase and see study participants using your product in the same wrong way over and over again. And it’s suddenly obvious that you need to change something basic.

But if you reach the end before going back, you throw away all that work and it’s very expensive and time consuming. I often use the analogy of hardening cement – a product is easily modified early in the development process, but closer to launch becomes much more difficult and costly to change.

A non-iterative design process works like this: After the initial specs are worked out, it’s as if a gate locks and the specs can no longer be modified. After you build a prototype that works, the shape of the device is set in stone. A better process is iterative – it cycles back several times so if something isn’t working, you can find out early on or in the middle of the process and fix it. For example, the software industry has a very effective process called Agile.

First, they determine a stack or backlog of features the customer wants. They prioritize a few to implement in a ‘sprint’ during which they implement as many features as possible. A sprint is marked by daily scrums during which everyone updates everyone else on their progress. After each iteration, the client and designers reevaluate the product, decide what works and what doesn’t, and prioritize a new set of features. After several such sprints, the goal is to have a final product that speaks for itself and is intuitive enough that the user never needs to crack open the user manual.

For a tangible product, Agile can get a little hairy. We have had good luck modifying the process a bit with longer cycle times and usability assessments built in early (as illustrated in the hybrid process, above).

When we start getting real with a product, we’ll often make two fairly different prototypes and test both. If they differ significantly from each other in key ways, you can get a lot of insight. The prototypes don’t have to be fancy – only make them as ‘real’ as you need them to be at that point. If you’re testing a product’s grip, you don’t need it to be the right color, for example. 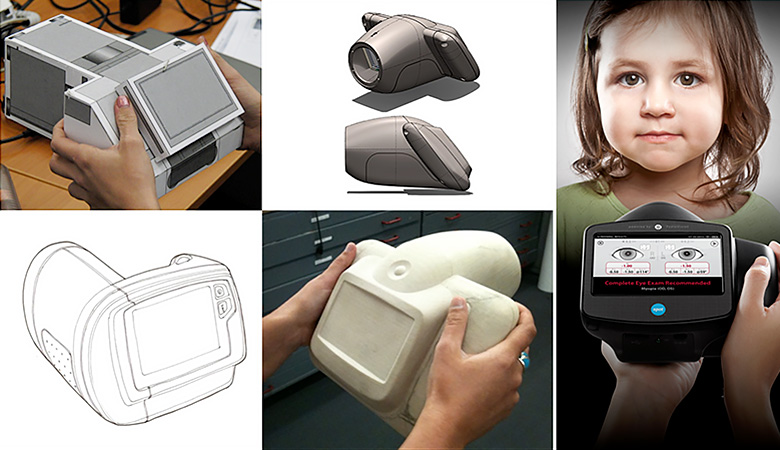 Each type of prototype, from an early paper model to a more sophisticated, working prototype, has its place in the development cycle.

The Benefits of Doing It Right

Using consumer product design techniques such as these just makes sense for consumer medical devices. Ethnographic research done up front, focused ideation, tapping into the collective wisdom of user advisory panels, usability testing conducted early and often, and design iteration with lots of prototyping can all help ensure they’re safe and effective for use.

These techniques bring a host of other benefits as well: reduced development costs; increased product sales; faster learning and better retention of information by the user; reduced task time, errors, support, and helpline costs; and reduced time and money devoted to training. It certainly helped when I worked at Xerox. We wised up after that printer fiasco and worked usability testing into our development process earlier. To quantify the effect we crunched the numbers for one product we worked on and found the avoided costs to be around $2.5 million. With medical devices used by you, me, our kids, our parents, and our neighbors, the last thing we want is increased error rates. These stakes are much higher than the loftiest dollar signs.