Last January we introduced you to our in-office home brew project. In May, we reported on our first iterative process, testing how minor parameter changes — in this case, temperature — would alter our product.

When we originally started our home brew project, we were thinking of designing it as a product for the commercial market. We also explored a brewing concept for a consumer product and mobile app. Now, one year and seven beers wiser, we pause to reflect and discuss some engineering and design enhancements planned for Bresslergroup Brewery in 2015.

Tasting Notes: How the Beers Ranked

Before we get to our process, some notes about our most recent products. Our three newest beers, produced over the second half of 2014, ranked better overall than any of the first four — a positive indicator that our design and engineering process is working. 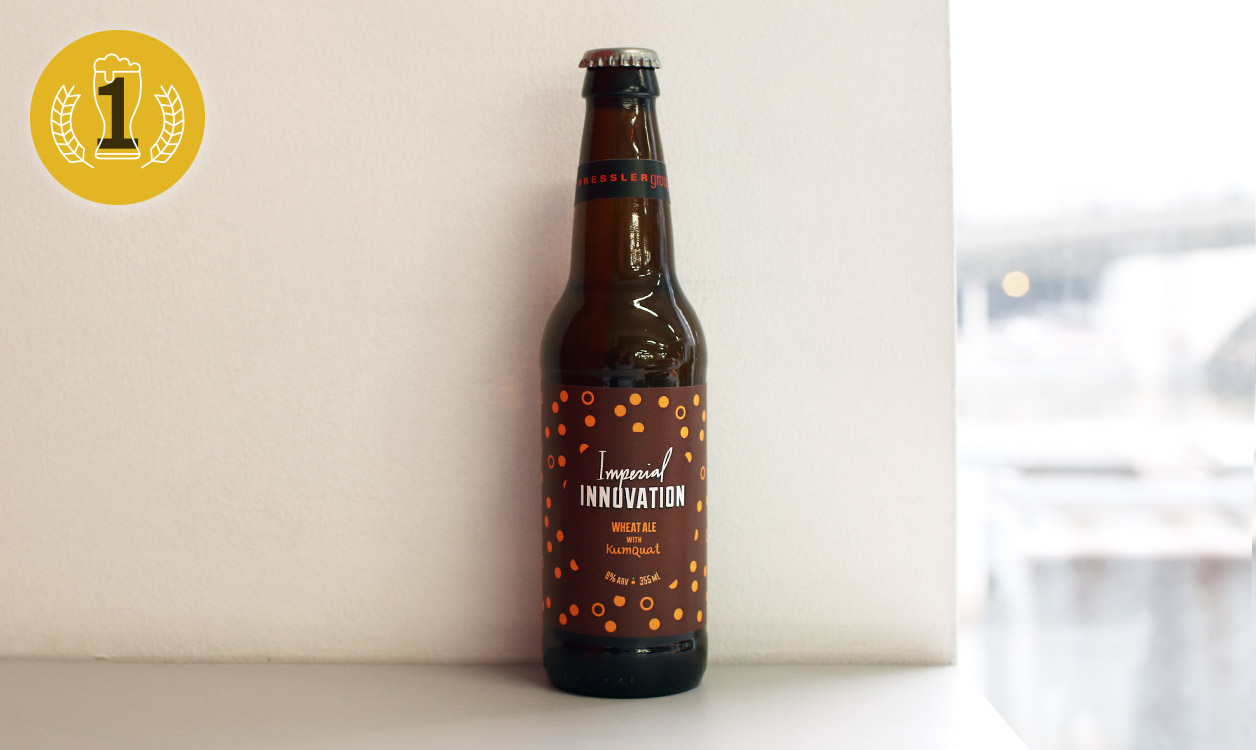 So far Imperial Innovation is our top-ranked beer.

The top ranked was Imperial Innovation, our first summer brew. It was a cloudy wheat beer aged over two pounds of kumquats. The heavier mouth feel, 8% alcohol, and unique citrus profile without bitterness had tasters comparing it to a crafty Blue Moon. 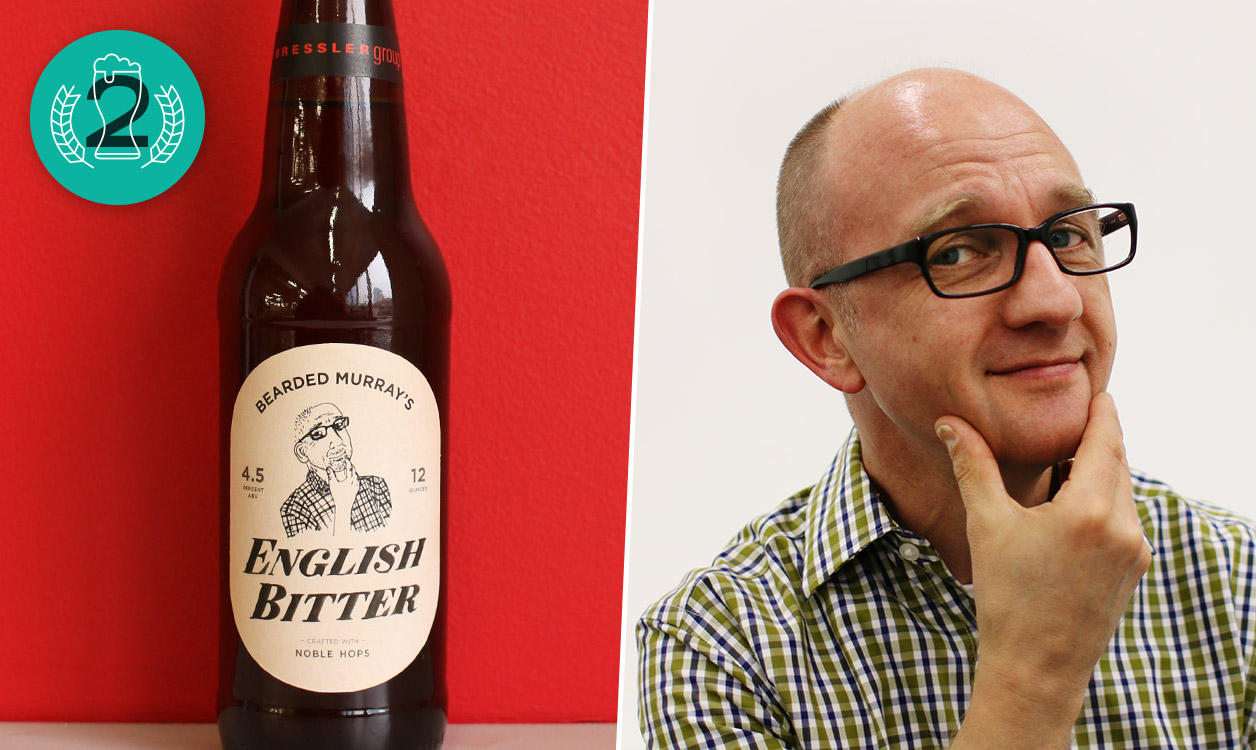 Our Bearded Murray was in the UK tradition, just like our resident Brit.

Coming in a close second was the Bearded Murray, an English Bitter named after Chris Murray, our resident Brit, seen here in his “Before” pic at the launch of our Noshavember fundraiser. (See how the beards grew here.) English Bitters are classified as pale ales, but the European hops lend a subtle, bitter, earthy flavor compared to the aromatic, floral US version. Our Bearded Murray used European hops and was very much in the UK tradition, easy to drink, though it tasted as if it had somehow gotten contaminated with Belgian yeast. Still a good taste, but indicating we might need to tighten up our process. 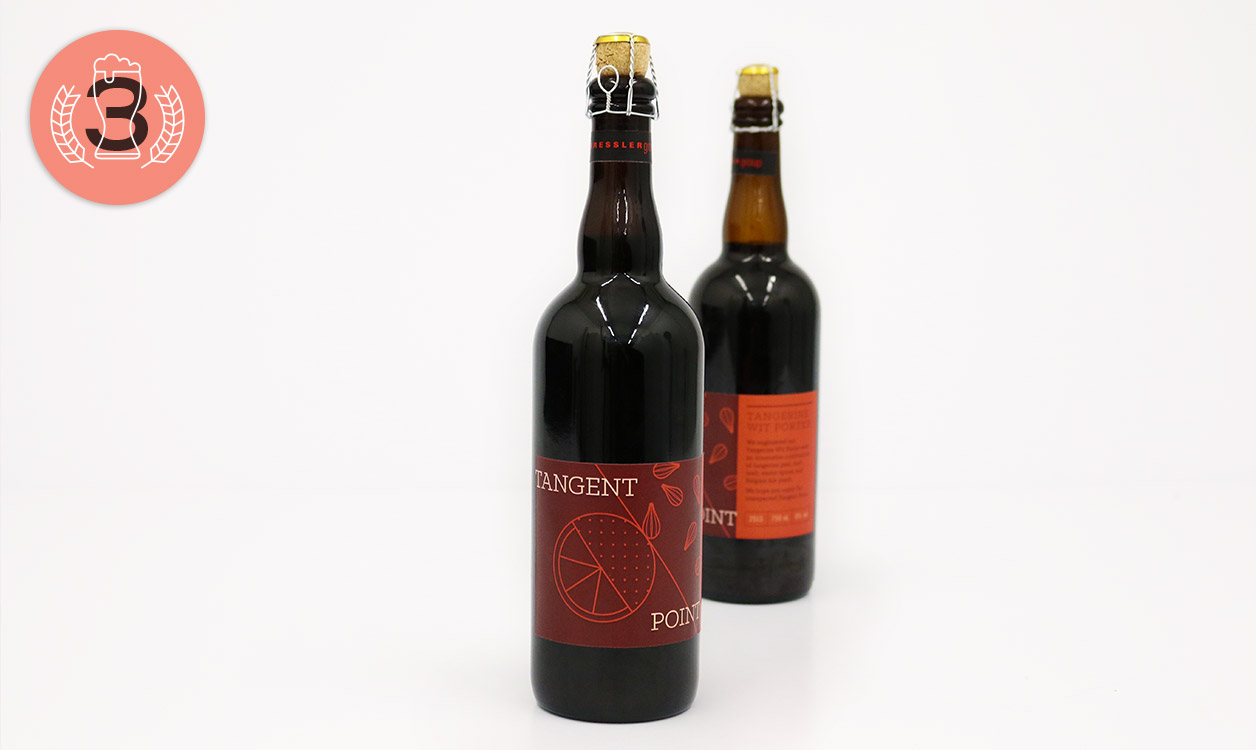 For our holiday party we brewed up Tangent Point, a Tangerine Wheat Porter, and served it out of a keg so it could carbonate and be ready to drink faster — two days instead of two weeks. Even though Tangent Point ranked 3rd overall, popular demand for it was high enough that we brewed a new batch and bottled it for the new year. 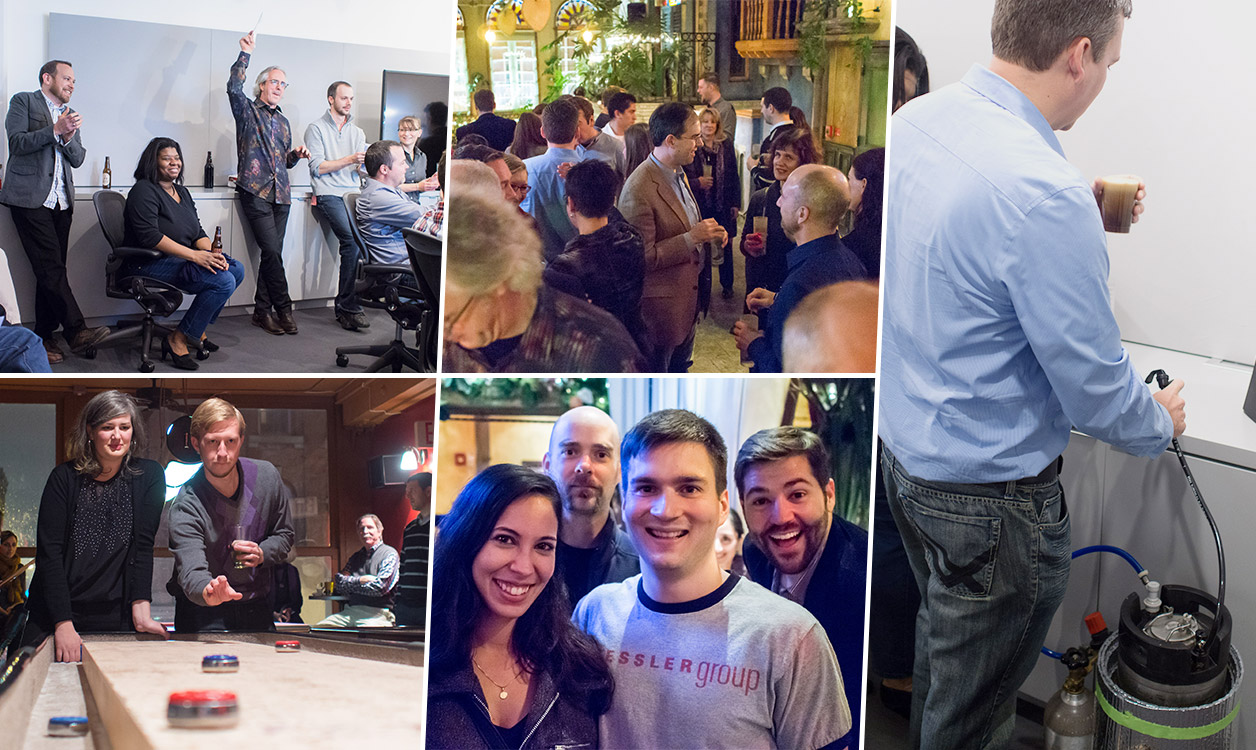 Tapping the keg and other photos of our holiday party, which started at our office, then traveled to Cuba Libra and Buffalo Billiards.

As the year progressed, we decided we wanted to personalize the system for our own needs. Unlike a lot of home brewers who brew outdoors, we need to keep it inside. We’re busy (really busy) and can’t spend time babysitting it. We’re also interested in repeatable results. So the Bresslergroup Brewery is morphing into an automated, in-office brew setup for engineers who love data.

After processing seven different beers in our first prototype of the Bresslergroup Brewery, we’ve identified several changes we’d like to make. We’d like to leverage some of our learnings, especially the electronics, from the automated coffee maker we developed last year. Brewing beer has a lot (temperatures, times, and volumes) in common with brewing coffee. 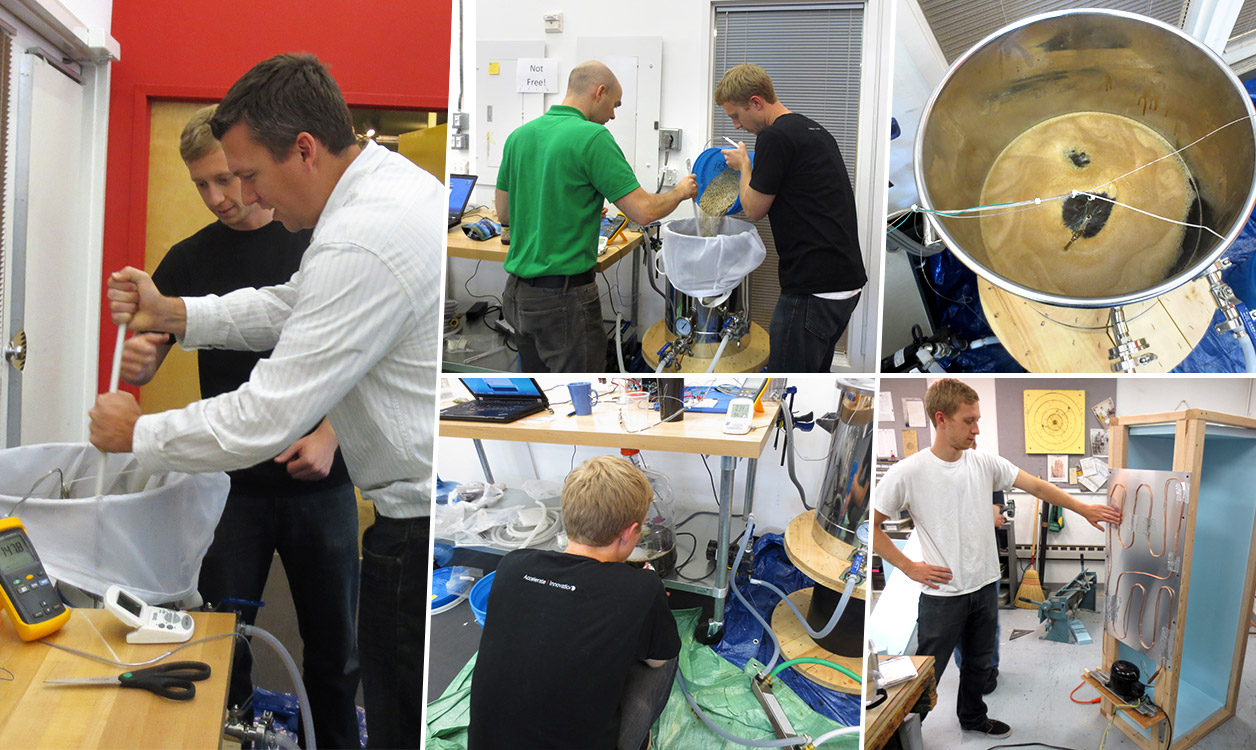 We’re already getting nostalgic for our first prototype — DIY fermentation chamber, awkward crouching, and all.

2. Change the thermometer’s location, and add additional sensors. Once we move the heating element, we’re going to have to recalibrate to figure out the best place for the thermometer in our new setup.

We’d also like to add a sensor that can tell us exactly how much water is in the kettle, and how much is left at the end. Right now we only know how much we add in the beginning. But varying amounts of water can be lost to evaporation or absorbed by the grain in any particular batch, and that can lead to beer more or less concentrated than we intended. We’re thinking a weight-based sensor might work well for this.

3. A hop filter. Currently we just put the hops in a bag and throw it in the kettle with the grain. But eventually we’d like to get a separate vessel for the hops, and pump the water through it. That way we could precisely control how much the water ‘sees’ the hops, and experiment with different brew times and flow rates. It would also allow us to more easily add and remove other spices, like cinnamon or cardamom.

The brew system will be automated to a point where the operator loads in grains, sets a brew schedule, and the system runs itself until it’s ready for fermentation. Data regarding temperature, volume, timing, etc. will be used to compare how each brew went relative to the others. This will give us confidence our system is able to repeatedly brew beer. 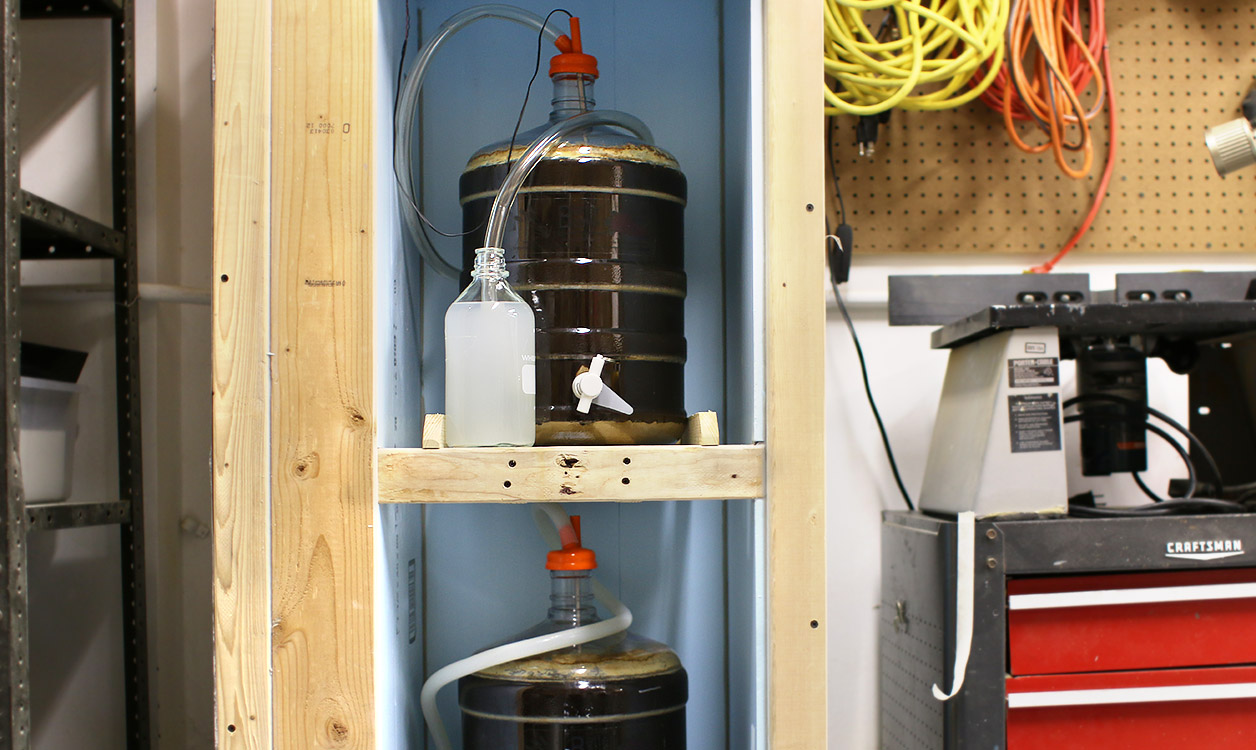 The Tangerine Wheat Porter, in the process of fermenting.

Next Steps: The Perfect Brewing Location

Our current brewing spot was dictated by necessity: it’s near a side door exit that just happened to have a 220V line accessible to run the heating element. We’re not quite violating fire code, but the Bresslergroup Brewery deserves better.

So when we move this spring to our new office across town, Bresslergroup Brewery will get its own, dedicated space! Our wish list for the architects included access to water and a drain. We’ll also have a stand (no more awkward crouching), easily accessible bottling and kegging equipment, and potentially a bar hangout area with beer on tap so we can showcase and share our brew.

Taps will increase our sustainability, too, by reducing the use of glass bottles, which aren’t as recyclable as we’d like. And it means visitors will be able take beer home via reusable growlers. (So come and visit!)