(This post is based on the video, “Hierarchy of Needs,” in the Design Defined: Design Principles Explained series.)

Most of us have seen the pyramid that illustrates Maslow’s Hierarchy of Needs, with “Physiological” at the bottom and “Self-Actualization” up top.

The theory behind it is that humans are motivated to fulfill basic needs first, before moving on to the next, more advanced set. The lower-level needs serve as a foundation. If that foundation is unstable, the higher levels won’t have a leg to stand on.

To put it in more personal terms, you’re not likely to ponder existential questions about your existence (Self-Actualization) if you don’t have enough food to eat (Physiological). You’re not going to be able to give much of yourself to your relationships or community (Love and Belonging) if you’re worried about the demise of the planet or your health (Safety). 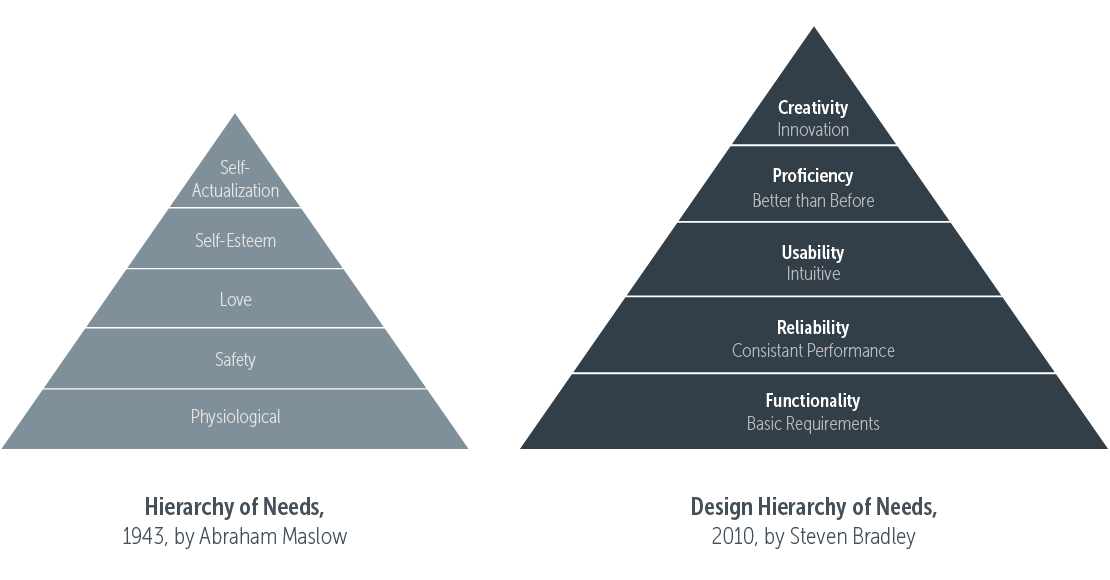 The Design Hierarchy of Needs

U.S. psychologist, Abraham Maslow, proposed this framework in a 1943 paper, “A Theory of Human Motivation,” published in the journal, Psychological Review. Since then it has been adapted as an approach to inform many scenarios — from teachers working on classroom management, to nurses learning to set patient-care priorities, to marketing strategy, writing code, the Internet of Things, and much more.

How can product designers apply this theory of human motivation to their work?

In his 2010 article for Smashing magazine, “Designing For A Hierarchy of Needs,” writer Steven Bradley introduced a “Design Hierarchy of Needs.” In it he translates the five sets of needs in Maslow’s Triangle into a product design context, using the examples of a website and an MP3 player. From low to high, he defines the needs sets as: Functionality, Reliability, Usability, Proficiency, and Creativity:

Reliability: The design maintains stable and consistent performance. It works again and again.

Usability: The design is easy to understand and use. People can figure out how to operate it without difficulty. If a user makes a misstep, the product is forgiving.

Proficiency: The design empowers people to do more and better. It enables users to do things that weren’t previously possible and to expand on basic functionality.

A design has no chance of success if it doesn’t meet people’s most basic needs. In other words, no matter how beautiful or cool a lawn mower looks, it’s not likely to sell if it can’t cut a lawn. The function of a product must come first.

You can see how this works if you look at the evolution of the spoon. At first humans only needed the most basic, functional scoop, so we used our hands. Then we found something more reliable — a shell shaped like a small, shallow bowl. Adding a handle provided enhanced usability. Proficiency came with the invention of metallurgy and spoons made from silver. This is when the modern form, with the tip of the bowl narrower than the base and the rounded end of the handle turned down, evolved. Victorian-era England may have been the height of spoon creativity, with a mushrooming of specialized spoons, including melon spoons, grapefruit spoons, berry spoons, citrus spoons, and aspic spoons. 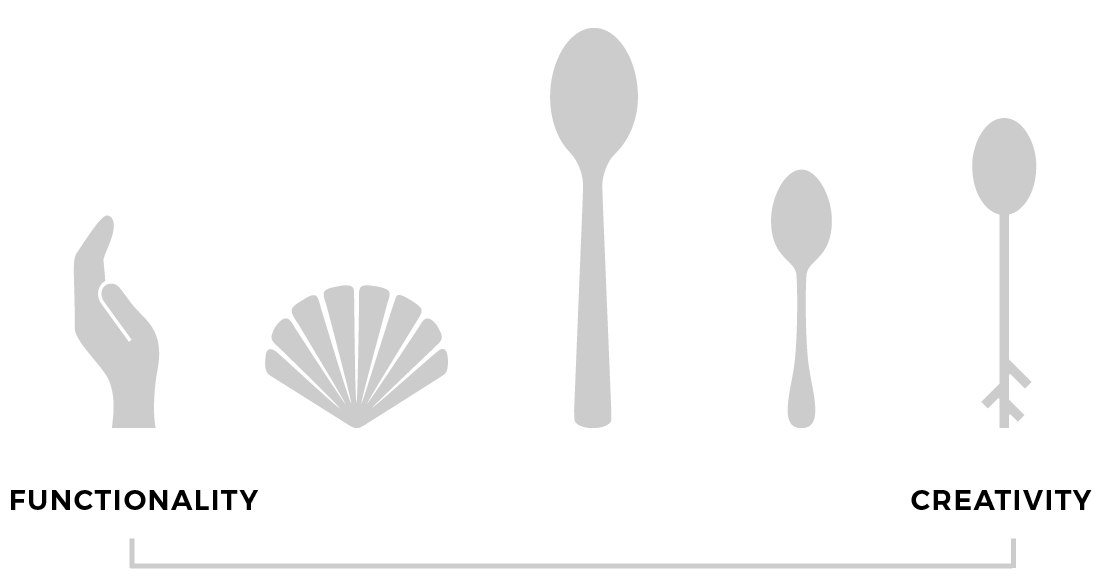 The Design Hierarchy of Needs for Complex Products

Of course this principle gets more complicated with more complex products, such as the digital-physical devices that make up the bulk of designers’ work these days.

Take the connected product, Rachio 3, whose function, or product promise, is to provide control over your sprinkler system from anywhere, using an app on your phone. Rachio is successful because it delivers on the promised function, and it does so repeatedly and reliably.

The team behind Rachio recognized usability as an important differentiator. A lot of time was spent during product development on designing foolproof installation; ease of use for any kind of user, from novice to experienced; and intuitive interactions in both the hardware and the app.

This principle gets more complicated with more complex products, such as the digital-physical devices that make up the bulk of designers’ work these days.

Technical features like Rachio’s hyperlocal weather intelligence data support proficiency — the system only waters when absolutely necessary. Thanks to scientifically optimized watering algorithms, the unit knows when the ground is already wet or about to be rained on. It’s also the only smart sprinkler controller to work with Google’s HomeKit. All of these features contribute to a user’s enhanced proficiency.

Creativity is reflected in the hardware’s form and features, including its expressive light bar; streamlined, simple form; pleasing symmetry; subtly integrated interfaces; and a clever magnetic closure that makes it simple to slide the cover off and on. (In this and many other examples, there’s overlap between creativity, proficiency, and usability.)

Tying the Design Hierarchy of Needs To Perceived Value

Now take this one step further to look at the perceived value of a product and how it corresponds to this hierarchy. Functionality is expected. Designs that only meet basic functionality needs are considered by consumers to be of low value. Designs that meet only reliability needs are also perceived to be of low value. Again, we expect the products we buy to work and to work consistently.

Usable designs are perceived to be of moderate value. We arrive with basic expectations of usability, but we also recognize that many products aren’t going to work as we expect, or as promised. When a design is proficient, it begins to be regarded as higher value. People will pay more for a design that allows people to do things that aren’t possible to do with competing designs or previous generations of a design.

Designs that meet creative needs are perceived to be of the highest level. They not only command higher price points, but they also generate a loyal fan base. People will spend more on a product that’s beautiful, easy to use, and clever — as long as it’s functional, of course. That’s probably because the innovative product is more likely to make their life easier or more delightful, or both.

Challenging the Hierarchy of Needs

Maslow’s hierarchy has always had critics who pointed out the exceptions to his rule as well as his lack of empirical evidence. After his death in 1970, researchers underwent a detailed investigation of its validity, and new theories emerged. In the end, though, his framework remains ubiquitous and he is recognized for catalyzing a shift in our perception of what drives us — internal needs as opposed to external reinforcement.

Exceptions can also be found to the Design Hierarchy of Needs. The one that immediately comes to mind is Philippe Starck’s Juicy Salif which functions terribly but sold spectacularly and even occupies a spot in the Museum of Modern Art’s design collection.

Of course you could argue that Starck was challenging the traditional understanding of an object’s “function.” Is it to juice a lemon, or is it to be a beautiful and provocative object that sits on your table? Function is traditionally about performing tasks — but that’s not the case here.

Using the Design Hierarchy of Needs in Your Work

Can you think of other examples of products that either support the Design Hierarchy of Needs or don’t?

Think about this as you go about your life and work. Where does the product you’re using or designing fall on the hierarchies? And if you’re a designer, can you come up with concepts for the product you’re working on that meets those higher-level needs? Designers need to strive to go beyond functionality and reliability. Aim to bake usability and creativity into every product you design.