(This post is based on the video, “Nudge,” in the Design Defined: Design Principles Explained series.)

Have you ever given someone a nudge in the right direction? People tend to make decisions unconsciously. A nudge helps redirect them toward a better one.

The nudge theory was popularized by Richard Thaler and Cass Sunstein in their 2008 book, Nudge: Improving Decisions About Health, Wealth, and Happiness. Here’s how they describe it:

“A nudge, as we will use the term, is any aspect of the choice architecture that alters people’s behavior in a predictable way without forbidding any options or significantly changing their economic incentives. To count as a mere nudge, the intervention must be easy and cheap to avoid. Nudges are not mandates. Putting fruit at eye level counts as a nudge. Banning junk food does not.”

Simply put, it’s a little push that makes the user think or do something they might not instinctively do. 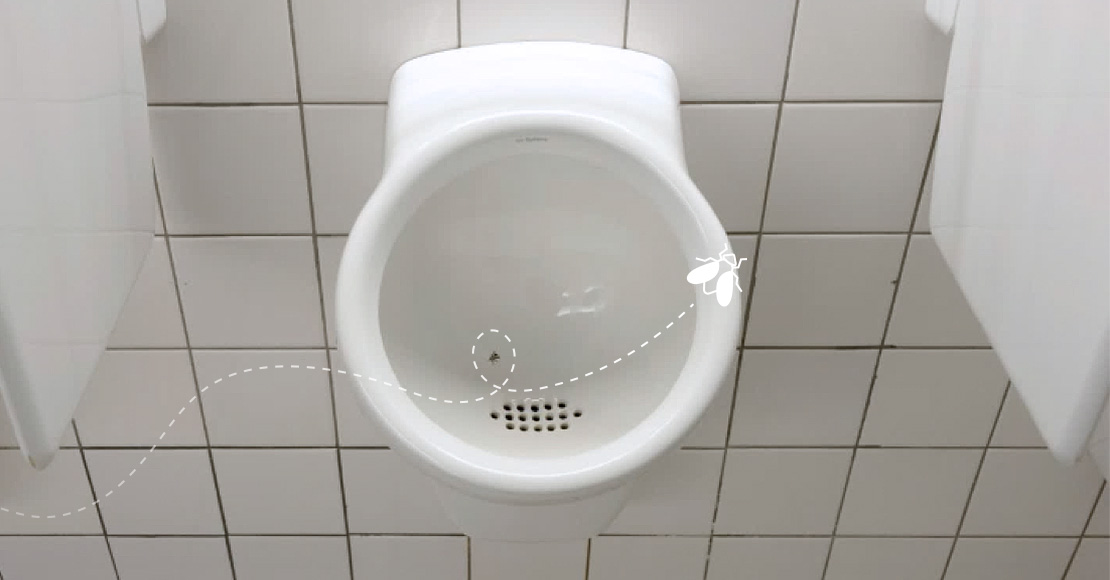 One of Thaler’s favorite illustrations of “nudge” dates back to the early 1990s at the Schiphol airport in Amsterdam, where the floors in the men’s restrooms were getting a little too sticky.

An economist who worked at the airport had the idea to etch an image of a housefly into each urinal just above the drain. The result was an 80 percent reduction in “spillage.” Sphinx, the manufacturer of the urinals, reported that the fly reduces cleanup by 20 percent on average. It turns out when men see a target, they want to hit it.

Nudge is a concept rooted in behavioral science that describes how minor design changes can markedly affect individual behavior.

The fly-in-the-urinal nudge was successful (and has been copied around the world), because it follows four important rules of behavioral design:

Here are some more examples of effective design nudges:

Nudging for Good, and Not for Evil

Nudges that benefit the greater good are more positive than others, but there is some controversy about the ethics of nudges that are designed purely for private profit.

Thaler’s mantra is, “If you want to get people to do something, make it easy. Remove the obstacles.”

In an op-ed for the New York Times, he supplemented that mantra with three principles to guide the principled use of nudges:

Thaler notes the existence of troublesome nudges, such as phishing practices, in the private sector. He calls these evil nudges, “sludge.” They’ve also been called “dark nudges.” Sludge, or dark nudges, are ones that encourage people to do the wrong thing. Procedures that accidentally or deliberately encourage inertia count as sludge. Voter ID laws are a good example as they’re calculated to passively disenfranchise.

Designing a default option into a user experience can either be a nudge strategy or a sludge strategy, depending on the operator’s intentions. Some countries make their citizens organ donors by default. That’s a nudge. But the tactic can be used against consumers. According to a survey, 70% of consumers in the U.S. continued to pay for unwanted subscriptions because they forget to cancel before the renewal date. They’re opted in automatically when they subscribe.

Can you think of a design element, either physical or digital, that has nudged you in the right — or wrong — direction?