The Guggenheim museum in Bilbao, Spain shimmers in a fantastic series of stacked curves. It caused a stir when it first opened in 1997, shattering the idea that buildings should have right-angle corners and straight walls. But it’s not as if architects had never dreamt of crazy curled walls before. They were just limited by their tools. In a curved building facade, every beam is cut to a different length, and any change to any single curve forces the architect or builder to recalculate the entire structure.

When Frank Gehry designed the Guggenheim, he adopted a tool that was new to architecture but was already in use in the automotive and airplane industries: parametric computer-aided design (CAD). Parametric CAD lets us capture the real ways we think about a product. It allows you to draw shapes onscreen as if on paper and, most importantly, to define the relationships between the shapes.

One Giant Leap for Engineers

As an example, consider drawing a rectangular bar that is 60mm long. You want 3 holes evenly spaced along the bar. In traditional CAD, you would enter the holes at locations 15mm, 30mm, and 45mm. But if you later decide the bar should be 100mm long and stretch it, the holes aren’t smart — they don’t expand to locations 25mm, 50mm and 75mm. They just sit there. The traditional CAD programs don’t understand the holes’ relationship to each other and the rectangular bar as a whole; they don’t understand your intent.

Enter parametric CAD. Modern CAD systems (we use Solidworks and Creo) take a different approach. Instead of telling the holes to be at a certain location on a grid, you can instead define the holes as equally spaced. These constraints are easy to define and change, so that as you modify a model, the software will recalculate everything following your rules or parameters. 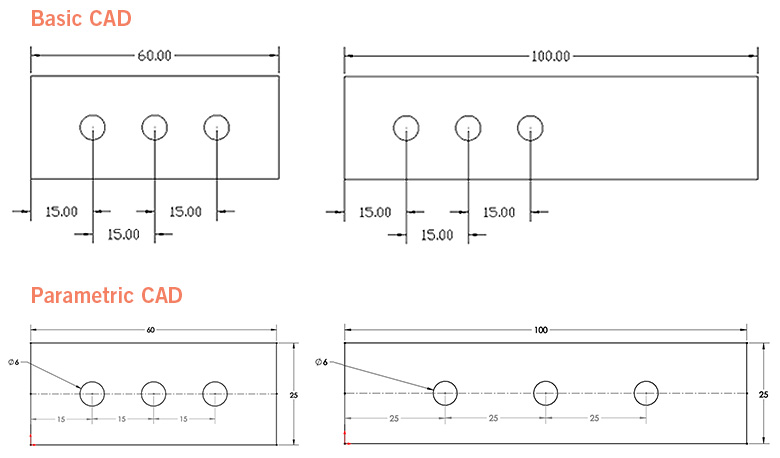 You could almost say Parametric CAD ‘understands’ the product design in the same way we do. At Bresslergroup we use it to design the majority of a wide range of new products. Like most design engineers, we could theoretically do without it, but we’d kill ourselves trying. Here are some of the problems it helps us solve quickly and capably:

Aqua Products worked with Bresslergroup on the design and engineering of their new pool robot, the Aquabot Breeze XLS. The timeline was short for a product of this complexity — just 4 months to release parts for tooling. Inevitably, late in the process we found a necessary and major change. We had to alter the fit of the filter basket, which changed the overall form of the product. Fortunately, the CAD model was constructed in such a way that the changes rippled through all the parts and required minimal tweaking. 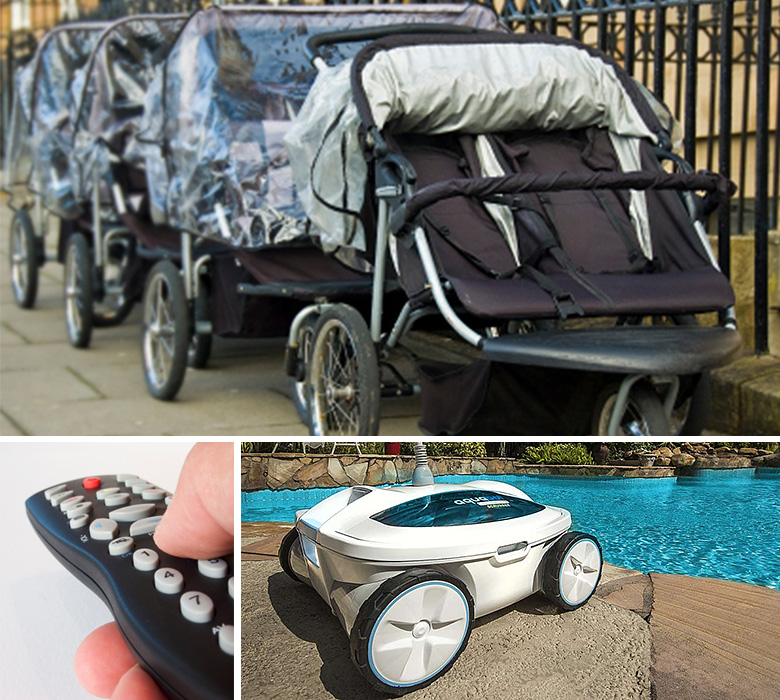 Parametric CAD streamlined the design engineering of all these products.

Easy to use and compact to store, collapsible carts and strollers have become ubiquitous, thanks to parametric CAD. The BOB Revolution SE Duallie stroller, for instance, is a full three feet long and nearly as wide — you can fit two toddlers in it side by side. And yet the stroller folds flat in two simple motions.

Maybe the designers could have figured this out with sketches and quick prototypes, but it would have taken a long time to get it right and might not have folded as compactly. Parametric CAD lets us constrain all the parts to rotate around pivots, slide along tracks, and fold and unfold virtually on the screen. We can check for interference throughout the entire range of motion and make sure we get it right before we prototype.

If you look at the boxy shapes of products from the 1970s and 80s, you can tell they started out as two-dimensional line drawings. The shift in design language to curvier, more organic shapes with tightly fitting parts is very much due to parametric CAD. Beautiful organic shapes can be created and controlled with just a few key parameters, which is why everything today, from cars to buildings to phones, tends to be a little curvier than it was 30 years ago. A classic example is the remote control. Say what you will about its complicated physical interface, but before parametric CAD, its sculpted hourglass form and snugly fitting battery doors were nearly impossible.

Because parametric CAD has so much information about the history of a design and the designer’s intent, there are lots of nifty things you can do, like calculating a product’s mass and center of mass, or rewinding the design to go back to an earlier point. Parametric CAD accelerates the design process and is as indispensable to today’s design engineer as drafting tables and compasses used to be.