Geoff Johnson admits he’s obsessed with efficiency — first he designed a digital product to simplify the messy process of splitting a restaurant bill. It did moderately well but wasn’t a runaway success, so he transferred his energies into creating a product that uses tech to enhance the experience of watching live sports.

THE BRAINSTORM: Johnson came up with CheckMate in 2010 when he was a mechanical engineering junior at the University of Pennsylvania. Going out to eat with friends was fun, but figuring out how to split the bill was a nightmare.

He and one of his Penn profs, Jonathan Fiene, designed a tablet to ease that pain. Outfitted with a bill-splitting app and a custom case with a credit card reader, servers present it to diners at the end of a meal and all they have to do is swipe to pay for their own items.

THE PIVOT: A big company who services stadiums got interested in CheckMate at a trade show and commissioned something similar for their premium suites, where the food service system was so technologically backward, the servers couldn’t take credit cards as payment. “You’d have to give your card to the server, then they’d have to run into a pantry and enter it into a system, swipe your card, and bring you a receipt,” says Johnson. “It was a crazy amount of inefficiency.”

SCOPE CREEP: SuiteMate soon grew into a bigger endeavor than CheckMate, with tablets designed to be used by servers for streamlining systems transactions and another version to be used by guests as a “second screen” for ordering merch, checking weather, and watching replays. 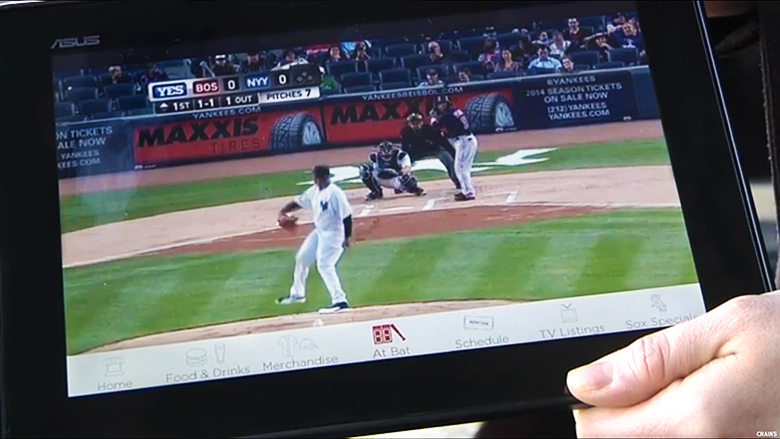 On SuiteMate, fans can instantly bring up replays.

THE DESIGN: SuiteMate’s hardware design is similar to CheckMate’s — a plastic case with a USB connection and a card reader to fit around a tablet. The sleek black case is designed to retreat into the background, so a user’s focus defaults to the screen.

To design the screens, Johnson spent three or four nights observing staff and guests operate and interact. He and his team interviewed servers, managers, dessert cart attendants, and guests to collect a list of features to build into the system. They charted about 700 nuanced interactions and spent two months designing about 500 of them.

THE RESULT: SuiteMate debuted March 31, 2014 in two Chicago stadiums — United Center and US Cellular Field. Both the guest-facing and employee tablets are in pilot mode. Johnson has on-site reps at nearly every game to observe and get feedback. So far, so good. “The servers don’t want to put it down, because it fits perfectly into what they do,” says Johnson.

AN EPIPHANY, IN HINDSIGHT: Johnson designed CheckMate to solve a universal diner’s dilemma, but one of the reasons it didn’t take off was that it didn’t solve any major pain points for the users making purchasing decisions: the restaurant managers and owners. “That was a powerful lesson in aligning your customers with whom you’re trying to create value,” says Johnson.

BIG DATA: In the next five years, Major League Baseball expects to introduce iBeacon throughout the league. These wireless transmitters will be able to “sense” or identify fans along with their patterns and preferences. (Such sensors are the connectors that make possible the emerging Internet of Things.)

“I think the goal of operational technology in these spaces,” says Johnson, “will become about gathering information and using it to enhance the guests’ experience.”

SuiteMate will evolve along with this emerging technology. For example, if you go to a stadium and it’s your 10th game that season, the person at the concession stand will be notified when you log in to your tablet. Then he’ll surprise you with a free hot dog. “Now you’ve generated a human interaction,” says Johnson, “through a piece of digital information.” 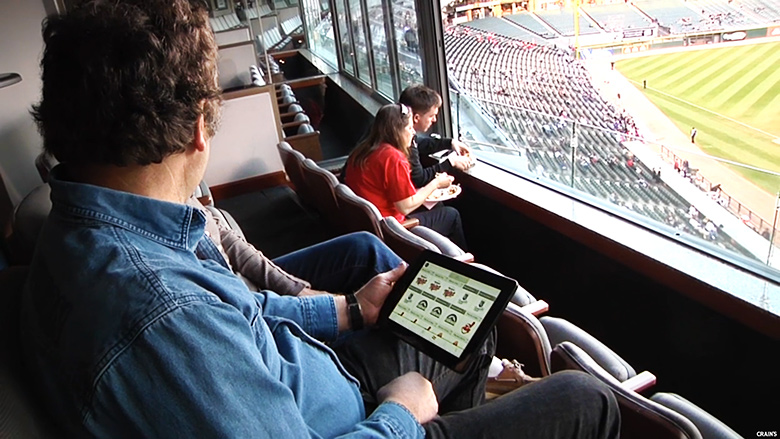 To read about more Philadelphia-based product innovation, click over to the Design Mind archive.