WHAT’S NEW HERE: TicketLeap’s reimagining of the event ticket as a selfie

The paper ticket is one of many everyday things disappearing into the digital ether. TicketLeap, an online event ticketing and marketing platform that issues QR codes as tickets via its mobile app, recognized this future in 2003. 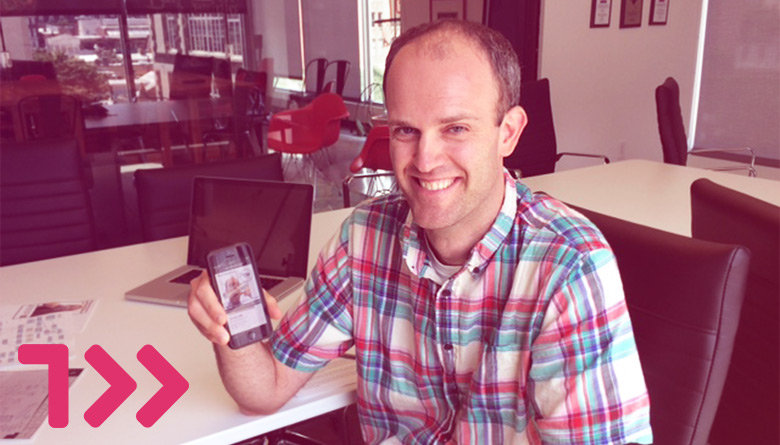 Nuschke with the invention he and his team guided into reality.

When interaction designer Paul Nuschke started at TicketLeap in May 2013 as its director of user experience, the staff was rethinking event check-in. “Pretty much everyone’s had the experience of going to an event and waiting in a long line to get in,” he says. Ticketleap’s tickets were QR codes that needed to be scanned, which could get frustratingly slow for both event goers and event creators — TicketLeap’s two audiences.

Learning on the job: Ethnographic research is built into TicketLeap’s company culture. All are encouraged to volunteer at and participate in events. Nuschke helped out at a few, including Wizard World and a brewfest in King of Prussia, that suffered from long lines, scanning bottlenecks, and slow WiFi networks. He and his co-workers noticed event creators throwing up their hands and abandoning the scanning of tickets altogether. 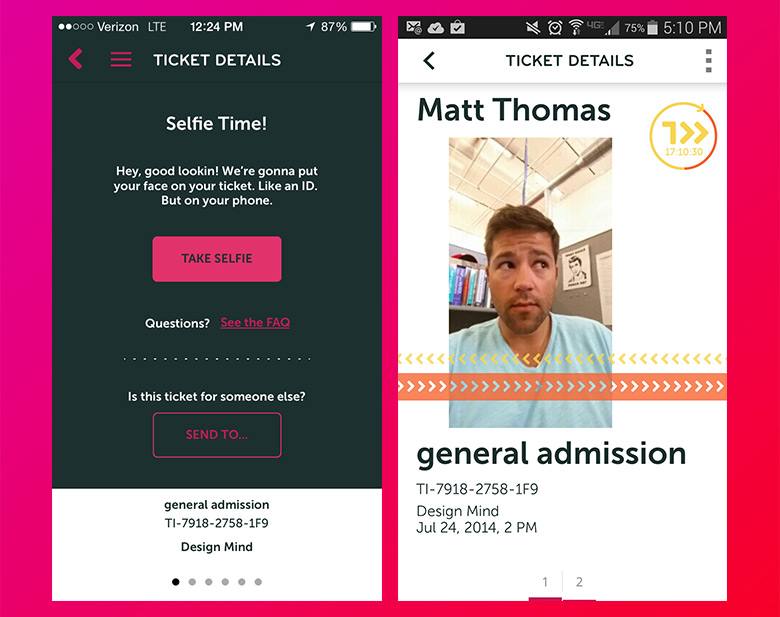 The prompt to take your selfie, left; a Bresslergroup selfie with a Fonzie photo bomb, right.

Branding rehab: TicketLeap targets event creators seeking to build community around their events; the brand’s mission is to be social and fun. The robotic, stressful interaction between scanner and scanned was off brand. “It makes for a rotten first impression,” says Nuschke. After a companywide brainstorm, their director of customer success proposed the selfie ticket. Eventgoers buy a ticket online, then download a selfie-ticket app. After taking and approving their selfie, the app layers their ticket info over the image. When they get to the event, they use this selfie on their phone as a ticket and picture ID.

Going with the flow: For Nuschke, the thorniest part of the design process was untangling the “flow,” or the ideal path for how the user might follow the prompts from screen to screen. One takeaway from observing people taking selfies was the importance of including a “retake window” in the app for them to redo their selfies. “We noticed it’s hard to take just one because the first one always looks wrong,” Nuschke says.

These kinds of educated guesses at what people might want and expect from the selfie ticket experience, combined with TicketLeap’s business needs (like including animations to prevent counterfeiting) went into building the app’s architecture. Then the visual design was worked out.

Testing, testing: They beta-tested it last February at the Launch Festival in San Francisco and confirmed the experience was faster, more fun and personal. All the security features needed to prove a person bought their ticket, including their face, are on their screen when they hold up their phone. The face-to-face check-in encourages conversation and eye contact — perfect for the event creator who’s trying to build community. Also, there’s no more scanning, eliminating extra seconds needed to align the QR code with the scanner. 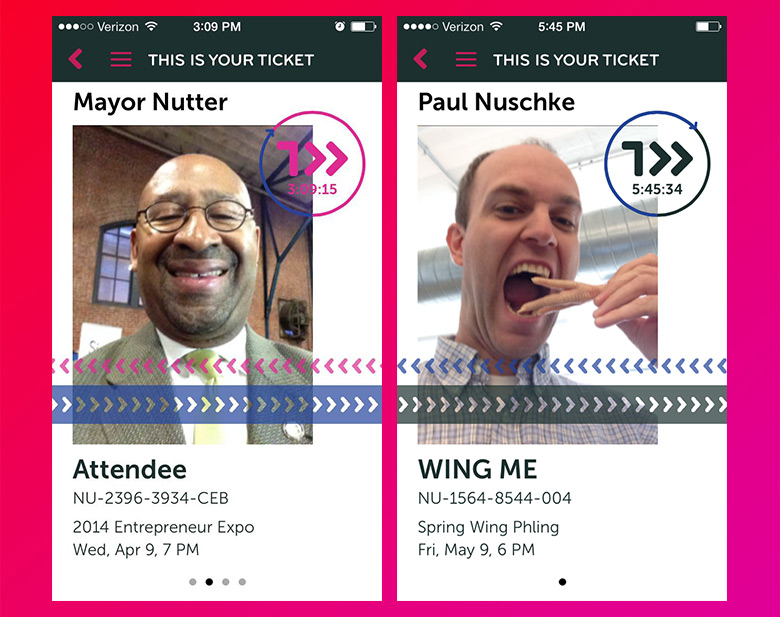 The new artifact: So far, the customer success team, which constantly checks in with clients, hasn’t gotten much feedback — generally a good thing. Staffers have noticed people posting TicketLeap selfies on their Twitter feeds — also a good thing. Even better, if you squint, you could imagine those tweets as the new, digital version of yesterday’s paper ticket souvenir. #almost

To read about more Philadelphia-based product innovation, check out the Design Mind archive.