(At Bresslergroup we’re interested in the paths that lead to innovative products, and we’re proud to be based in Philly, a growing innovation hub. This led us down the path to Design Mind, a series about product design innovation in Philadelphia that is produced in partnership with the Philadelphia Inquirer. Each column focuses on a single product, designed locally.)

Jason Lempieri went to design school at the Pratt Institute in New York, where the emphasis was on the beauty and purity of the form. He always craved more depth — what does a design do and mean beyond its beauty? Can it have both function and style? In his work as an architect and industrial designer, he has focused on incentive-based design, or the idea of creating a product that encourages someone to change one’s behavior, a highly challenging prospect.

THE BRAINSTORM: The notion of unused space — within walls, under stairs, and atop radiators — was swimming in the back of his mind, because he was teaching an architecture class at Penn on underutilized spaces in the home. Then: Lempieri was walking home through Bella Vista one day when he passed a college-age guy struggling beneath a split garbage bag of laundry on the way to the laundromat. Finally: The designer saw Glenn Ligon’s “Skin Tight,” an art installation comprising boxing bags stenciled with the logo, “Thuglife,” at the Fabric Workshop Museum.

“At that moment,” he says, “Everything jelled.”

LET’S MOTIVATE: Most people, but especially college students, don’t like to clean their rooms. How do you motivate them to do so? Lempieri was thinking about his own students and of himself in college and how much he hated doing laundry. And then there’s that unclaimed space beneath the ceiling. Unlike baskets and hampers, which take up floor space, there’s room in anyone’s room for a hanging punch bag.

TESTING THE CONCEPT: Lempieri spent time at laundromats observing people’s bags. He saw a lot of polyester ones with drawstrings that dug into carriers’ hands. Others carried duffel bags, garbage bags, and shopping bags — all were awkward.

He asked a lot of questions. (“I tell my students,” he says, “‘If you’re an industrial designer, you cannot be xenophobic.'”) A few weeks spent chatting confirmed that existing laundry bags needed a redesign. He surmised people would welcome a product that “puts a smile on a chore” and simultaneously gives users a way to work out their frustration. Of course it would have a strap that made it less of a chore to carry.

THE TWEAKS (BASED ON USER RESEARCH): He enlarged the proportion of the bag based on observing typically large loads and worked vinyl into the bottom of the prototype to repel detergent spills he saw on laundromat floors.

BOXING’S VISUAL BRAND LANGUAGE: Lempieri didn’t have to look far to figure out how to make the product read immediately as a boxing bag. “I’m in Philadelphia, land of Rocky,” he points out. “It’s embedded in our culture.” Still he went to boxing gyms and took measurements of actual bags. 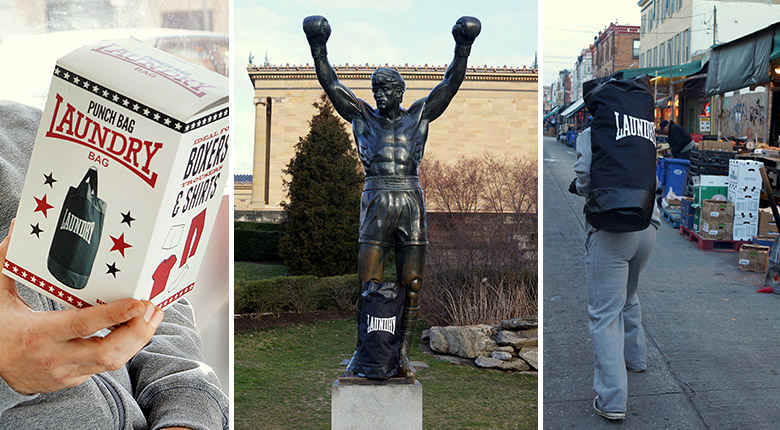 With an intern’s help he prototyped a few versions — he filled them and beat them up to test the concept. The more dirty clothes in the bag, the better it functions as a punch bag. He designed the body to have a tri-partite look, with a darker cap and bottom, and spent time figuring out how to recess the cap so the bag looks like a cylinder when it’s hanging. He built in more authenticity by designing a D-ring and chain system up top and exposing the stitching. 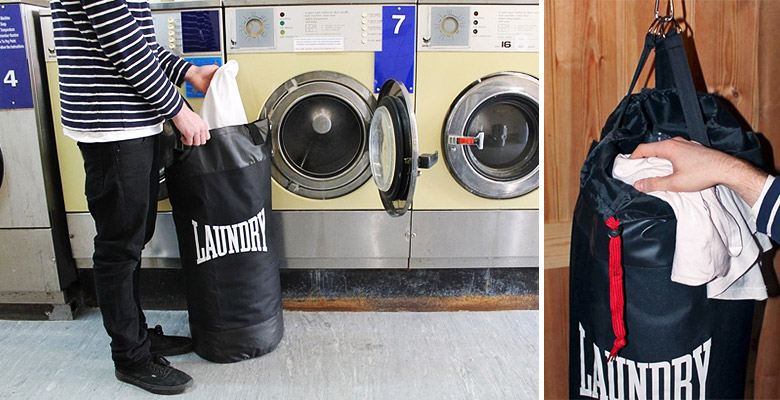 THE RESULT: A year after Punch Bag Laundry Bag came out, more than 10,000 units had been sold around the world by Lempieri’s distribution partner, Suck UK. In 2013 the Punch Bag won an award from Core77 in its soft goods category. In general, says Lempieri,  the most common reaction has been, “How come no one did this before?”