In the history of product innovation, there are famous successes – some arguably driven by new technology, and others that resulted from user research and insights.

There are also plenty of famous failures: the Apple Newton, Sinclair C5, Keurig KOLD, Sony Betamax, to name a few. The Product Development and Management Association estimates between 25% and 45% of new consumer products fail. The U.S. Department of Commerce puts the number significantly higher with 95% of new products missing their sales goals.

The question up for debate: Was the technology not ready for primetime, or did they fail because they didn’t listen to their consumers? 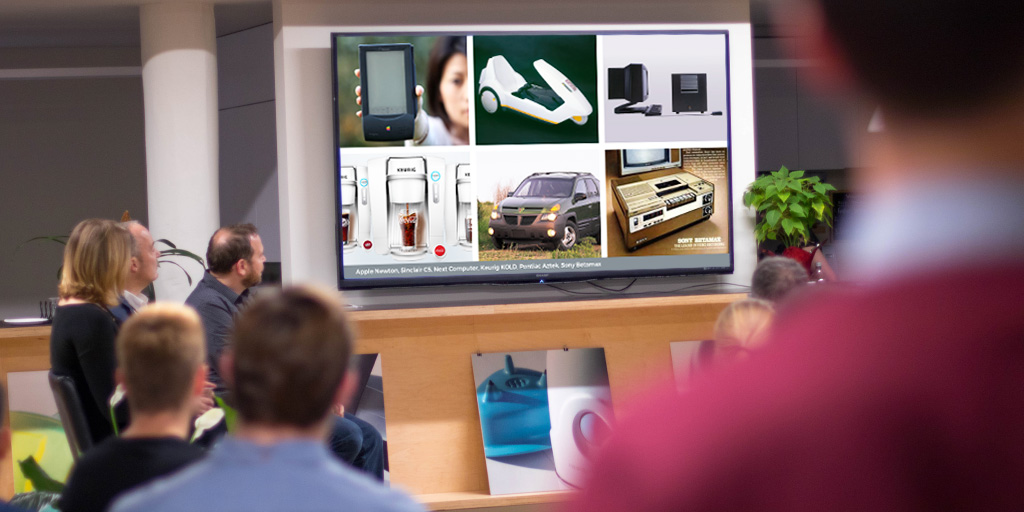 Don Norman, the famous advocate of research-based design, fanned the flames of this debate when he wrote in 2010 that technology was behind all major innovations to drastically alter society. “Design research is useless,” he wrote, “ …. when it comes to new, innovative breakthroughs.”

We invited six industry professionals to hash it out by participating in our Great Innovation Debate, a dmi NightOut we c0-presented with Penn IPD and hosted during DesignPhiladelphia. We asked them to come ready to fight for one side: Team Tech versus Team Research. Throughout the debate, moderator, Chris Murray, our Director of Industrial Design, challenged members of both teams to defend their stance. The audience determined the winner.

Out of the hourlong debate, here are five moments that stood out:

1. The Chicken or The Egg

Sarah Rottenberg, Associate Director of the Integrated Product Design Program at the University of Pennsylvania, gave the first plug for Team Research. She’s co-founder of Lia Diagnostics, a startup that originated when some of her students were doing research on women and pregnancy tests. They discovered a distinct unmet need: Users were pervasively concerned with the lack of privacy provided by current tests. In response, the students came up with a concept for one that’s covertly disposable. 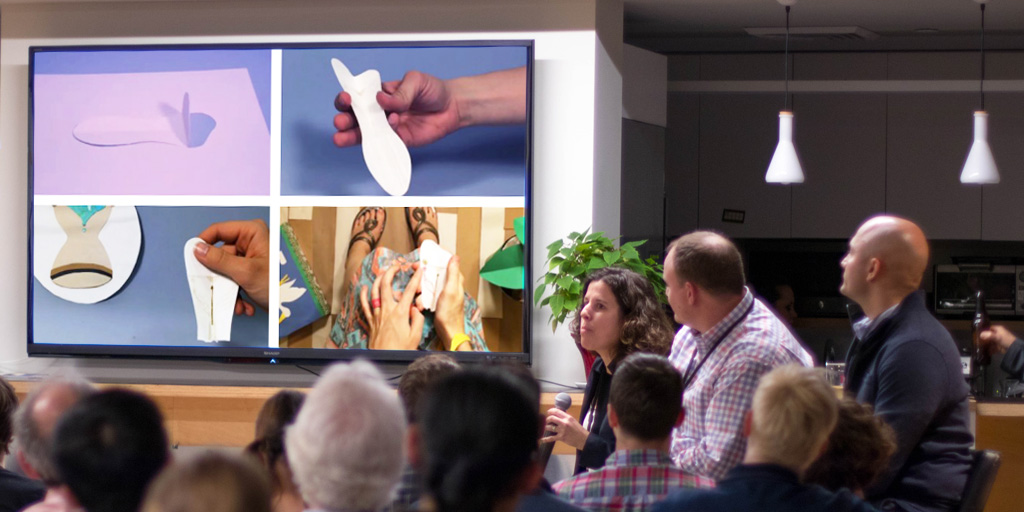 “Once we have this flushable pregnancy test, we can use the technology in different types of diagnostics,” Rottenberg said. “But it started with research. It was prompted by key insights into women and their lives.”

In his rebuttal, JD Albert, Bresslergroup’s Director of Engineering and a member of Team Tech, explained how the creation of E Ink, the display technology used in e-readers including Kindle and Nook, was just the opposite – it was driven purely by technology.

Albert co-invented E Ink shortly after graduating from MIT. At the time, Albert and his co-founders recognized the trend toward on-demand media. “It really started with asking the question, ‘What is the technology that we should develop in order to change the way people read?'”

Rottenberg jumped in to point out that Albert’s and his colleagues’ predictions about changes in consumer behavior around reading could be classified as “research,” introducing some uncertainty as to what combination of factors really drove that invention. Was it purely tech? Was it research? A combination? Hmm …

Of course, what we mean by “technology” changes rapidly, as William W. Braham, the Director of the TC Chan Center for Building Simulation and Energy Studies at the University of Pennsylvania, and a member of Team Tech, pointed out. Until the late ‘80s, technology consisted of “tools of one kind or another.” Then computing gave birth to networking technologies, which don’t require user participation. 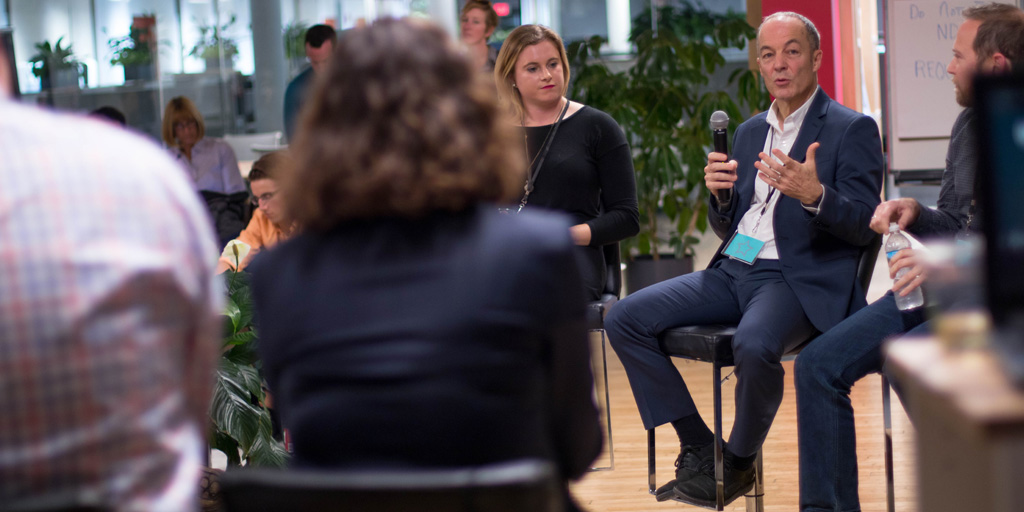 “I may choose to put my phone down,” Braham said. “But my phone, whether I want it to or not, will update the operating system.”

Even though technologies can now operate independent of the user, research is still needed to shape those technologies into meaningful products, remarked Team Research’s John Anastasiadis, Senior Manager, Industrial Design & Human Factors at Johnson & Johnson Medical Devices. The iPhone, for example, was not the first smartphone.

“What made the iPhone really special was all the effort it took to create a deal with Sony Music and create an ecosystem around iTunes,” he said. “When you strike a chord with customers, that’s usually based on research.”

“Betamax was a superior technology,” he continued, “but VHS won out because people wanted a cheap way to record videos.”

Albert jumped in on behalf of Team Tech with the observation that the multi-touch screen, a technology pioneered by iPhone, was a significant driver of that product’s development.

3. Without Tech, There’s Nothing To Research

Novel technologies are also driving plenty of useless inventions. Murray showcased a few examples cited by columnist, Allison Arieff, in her New York Times article, ‘Solving All the Wrong Problems,’ including a clothing sensor that tells you when your fly is down and a $99 drinking vessel that monitors your daily water intake. 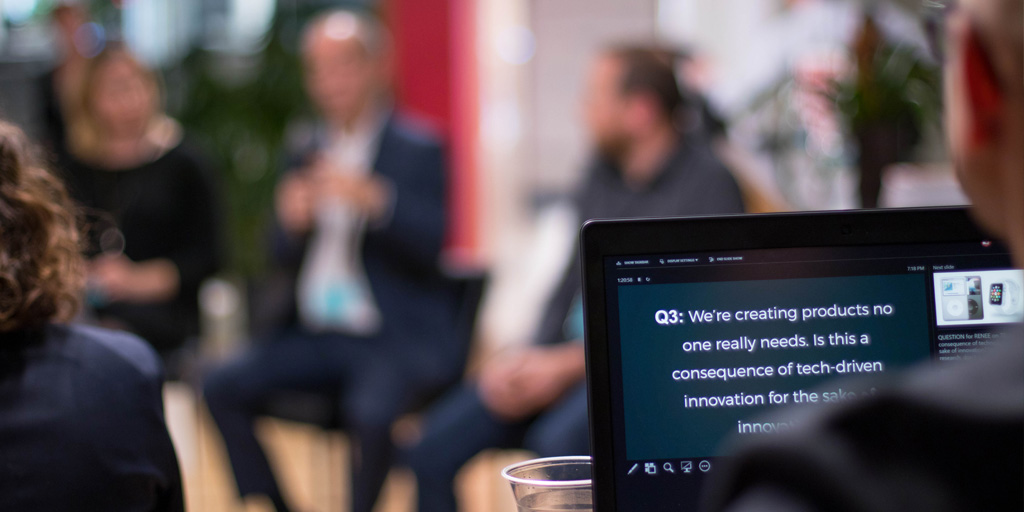 To Team Tech’s Renee Kakareka, founder and CEO of Olive Devices, failures are part of the design process. Potential investors expect to see a product prototype before investing in a new concept. The resulting model may be incomplete, but it can engage consumers and help them imagine a future with a new product. That’s often the first step toward effective innovation.

“If you don’t have the technology to get wrong answers,” she said, “you’re not going to get any answers.”

4. Without Research, There Are No Insights

Those prototypes don’t need to incorporate technology, Rottenberg responded to Kakareka, and can often be more effective when they’re primarily used to test research as opposed to technology. “If you don’t have the technology, there are lots of ways to mock up the experience of what the technology could provide before you go about investing a lot of money,” she said.

Rottenberg’s teammate, Jason Busschaert, Director of Industrial Design for Stanley Black & Decker, affirmed her statement with a story. After eight months of engineering efforts to increase the speed of the miter saw, he asked representative customers to test the “improved” product for a day while wearing GoPro cameras on their heads. The footage revealed users spent something like 18 seconds cutting and much more time moving materials around and measuring.

This research completely changed the focus of Busschaert’s team. They realized they had been solving the wrong problem. They switched gears and used their field observations to inform five additional patents that greatly improved the ergonomics of the saw. 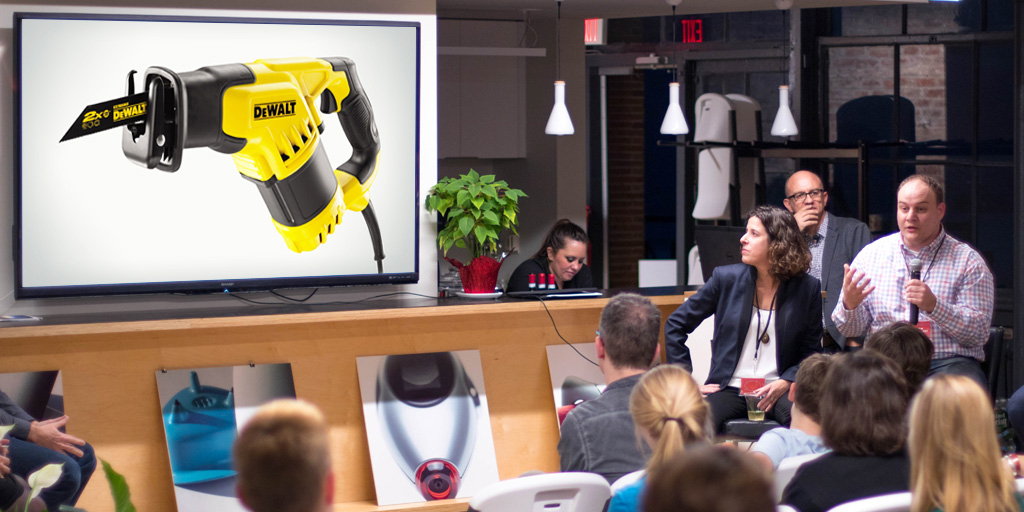 5. Tech Can Take an Incremental Approach

In the medical device industry, Anastasiadis added, the relative ease of building new technology can push designers to build faster and more efficient devices, but those new products don’t always bring value to the end user. 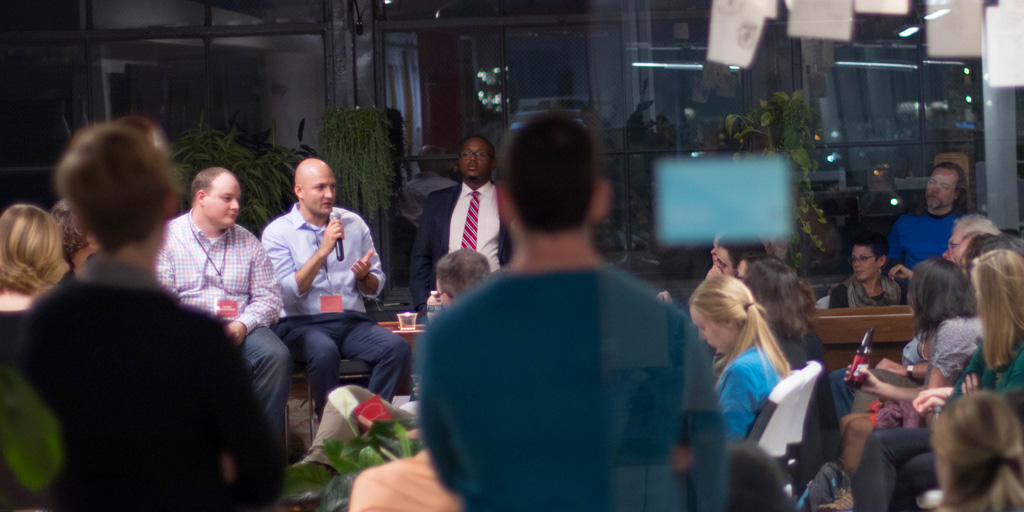 “To get to that level of understanding of value you have to do your research, which ultimately feeds into which technology you are going to pursue,” he said.

But Team Tech’s Kakareka insisted her method doesn’t lead to big commercial flops like Google Glass. She takes a modest approach, “writing a bit of code and adding it to an existing device.”

Ultimately, each team conceded that user research and technological development are interdependent, and innovation is most successful when both are employed. “Technology and research have to be parallel paths,” Anastasiadis conceded, “You need a healthy dose of both.” Albert added that imagination is another vital element that drives both technology development and research. 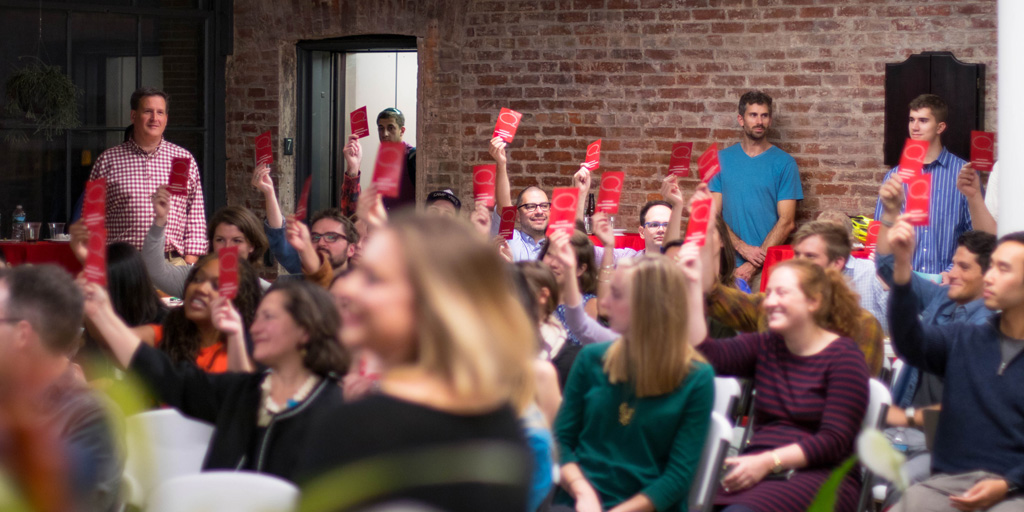 Busschaert may have hit on why research ultimately won.

“I think designers need to invest in both,” he said. “But research more so because research gives technology meaning. And without meaning, there’s no story. Without story, there’s no pull to purchase or associate yourself with that technology. It just falls flat.”

At Bresslergroup, we use both! Read about our Design & Innovation Strategy expertise.