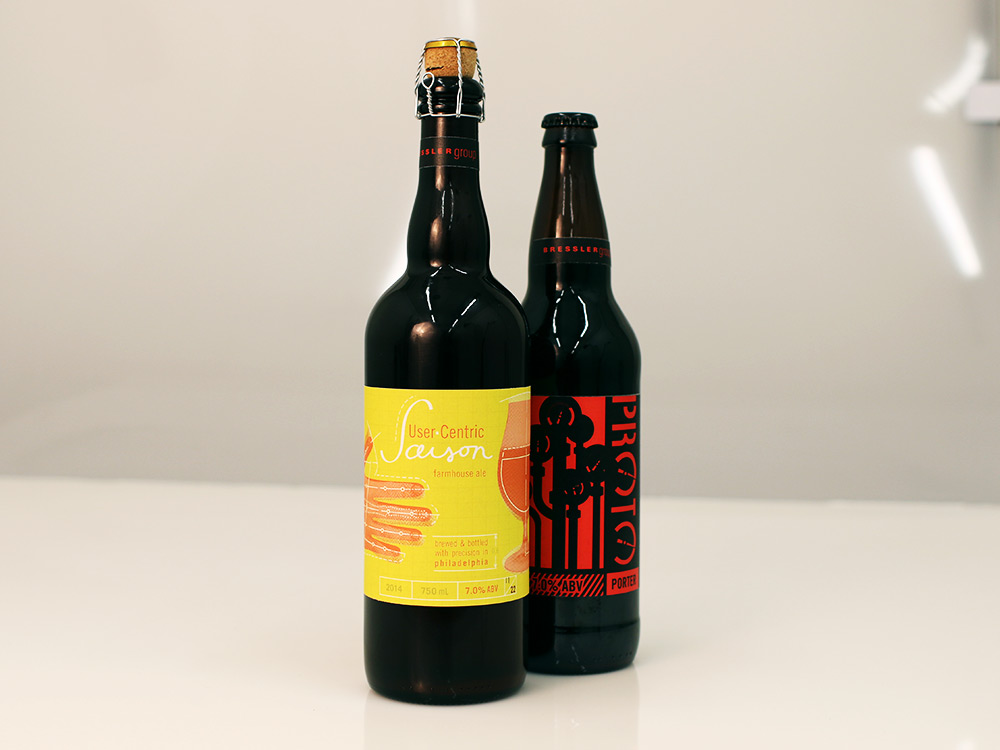 The final products of phase one.

What do you call the product of an in-company brewery? Company brew? Office brew? For now we’re calling our venture Bresslergroup Brewery. (We spend a lot of time at work, but not enough time to call what we’re making a “home brew.”)

We thought up this side project over the summer and in September a group of us with varying levels of brewing experience, led by myself and Seth GaleWyrick, embarked on a yearlong quest to innovate the brewing process. Our ultimate goal: To simplify, streamline, and automate the typical home brew process using our multidisciplinary approach and employing Bresslergroup’s design process. As for the deliverable: We want to develop an automated system and a concept for a streamlined, consumer home-brewing appliance and app.

Adding luster to the project is the rich legacy of craft beer in our hometown. Before Philadelphia’s founder, William Penn, even arrived on these shores from England in 1682, he sent ahead plans to establish a home brewery at his estate on the Delaware River. (Priorities.) We like to think he’d approve of our initiative. Of course Philadelphia has upheld its reputation over time as a great beer town. For a good overview, check out this Philadelphia History of Beer poster over at Drink Philly.

Left: William Penn’s brewing house. Right: Listing of the many Philadelphia breweries in 1896.

The Team: Our Multidisciplinary Approach

When we first started talking about Bresslergroup Brewery, we got excited about the similarities between designing a beer and designing a product. Both require technical know-how and strategic thinking. They also require the expertise of all our disciplines — strategy, research, engineering, industrial design, interaction design, and product branding. We’re used to working in parallel on client projects, and this would be an opportunity to do so on our own.

At some point, all our co-workers will contribute. (We’ll pay them in beer.) Once we (engineers and researchers) get the mechanical system laid out, we’ll need industrial design (ID) to develop the package into a visually pleasing, compact unit.

User interface and interaction design (IxD) will be essential while we’re automating the system — we’ll need an interface both to guide the user when inputting brewing parameters and to provide feedback about what the system is doing and which steps are coming up.

Even at this early stage we’re consulting our ID and IxD colleagues about possibilities and requirements for design elements and running a controller system.

Branding is already in the works — since it’s not dependent on the system’s mechanics, our strategists and visual designers have been working on logo designs and label graphics for the Bg Brewery brand. (Proto-Porter and User-Centric Saison, the names of our first two products, were crowd-sourced from the company.)

The process we’re using to develop this brewing system is similar to the one we use to develop products for clients.

The first phase of the process was mostly about definition and concept development. From the beginning we knew an all-electric system was the best fit for us. In an electric system the heat is provided by an element not unlike a hot water heater or an electric stove. Compared to the more common approach of a propane burner, an electric system is easier to control with a computer and therefore to automate. In addition it can be used indoors (and even in the office). In contrast most home brewers are working with a kettle on their stove or a larger camp stove type burner outside and maybe five to ten percent use some type of control system.

Our main focus for this first round was to learn from our manual brewing system how to improve the flow and identify the hiccups — all toward the goal of streamlining the process and figuring out how to automate it more easily. As we continue to refine, upgrade, and optimize we’ll keep getting closer to the brewing system of our dreams. 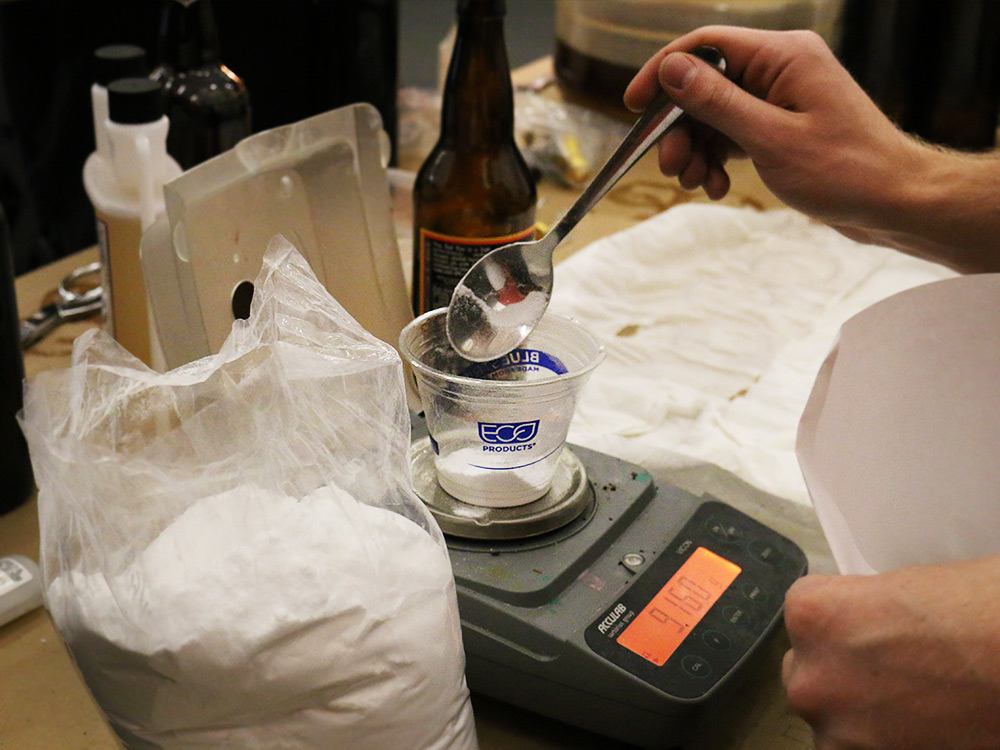 Precisely measuring the sugar, which is added during bottling to produce carbonation.

Concept development is a combination of testing, research, and making early prototypes to try and figure out the best ultimate direction. It’s also a feasibility study to determine whether our goal is ultimately doable. (This is similar to the initial work we do on any big client project at Bresslergroup.)

To start we benchmarked and researched what’s currently out there. Between our own brewing experience and the huge variety of home-brew systems online, we set about trying to combine bits and pieces of existing technologies and approaches in the most effective way. Electrical systems are relatively new, so there’s not yet an optimum approach. Everyone’s figuring it out on his or her own and doing a lot of tinkering. This is great news for us because it means there’s room for innovation.

In addition to online research we drew heavily from Seth’s home setup. He uses the brew-in-a-bag method (single vessel) with electric temperature control, but a gas burner for boiling. This is the primary difference with our system since we use electric heat for both temperature control and boiling. This has certainly presented new challenges. The electric element takes up space in the boil kettle and complicates automatic mash stirring. This is the probably the biggest mechanical issue that we have yet to overcome. 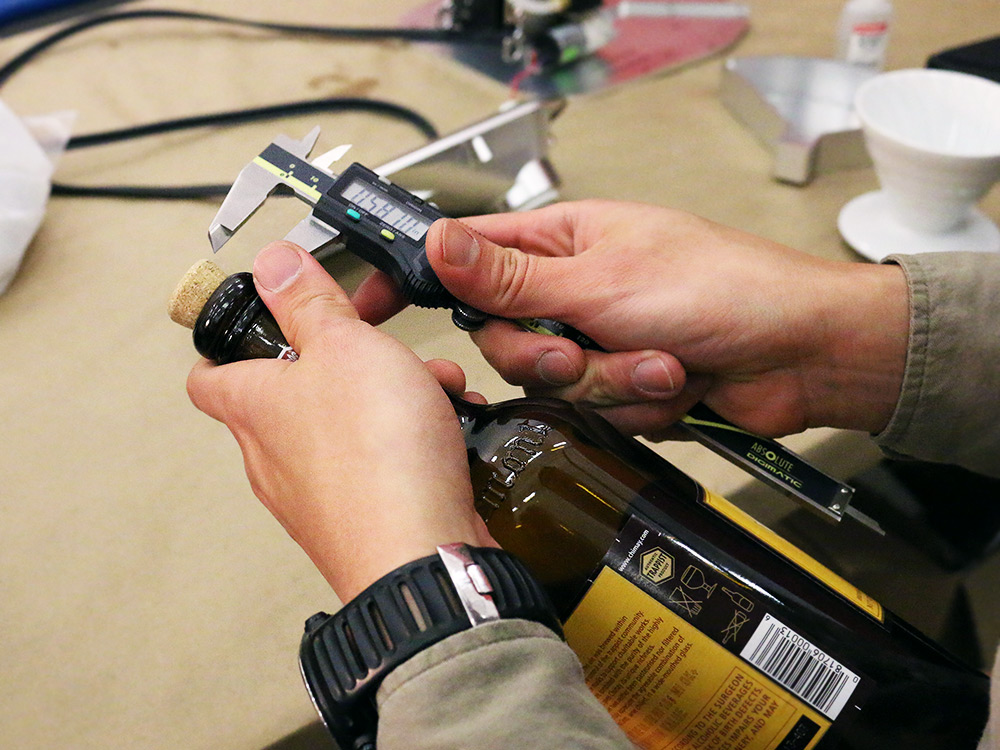 Ultimately we ended up with a skeleton system and two beers, a porter and a saison. While getting our system going, we learned a lot about its dynamics and how everything works in harmony. We made a few changes, including moving the location of the thermocouple from the top of the kettle to the outlet to get a better read on the temperature; and tweaking the recirculation so the mash is always being mixed. We have a lot more changes to make to our second generation system, including better automatic mixing and more sophisticated controls.

We also learned about managing expectations — from now on we’ll tell coworkers the beer will be ready in six weeks, not two. (Technically each step takes two weeks, not each beer.) We broke open the Proto-Porter at the company holiday party and the Saison a few weeks later. Keep in mind these are prototypes, so they shouldn’t be perfect — you have to leave room for improvement. Cue: Phase Two. … Stay tuned, and check out our tasting notes below for the Porter and Saison. 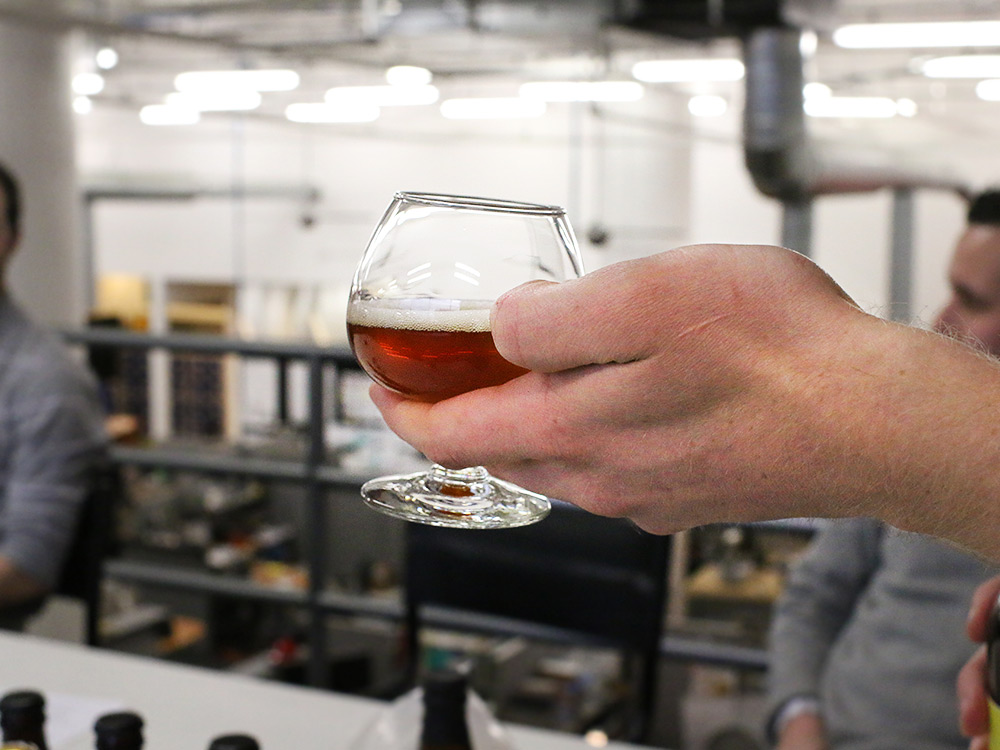 A snifter of Saison for our first tasting.

Proto-Porter: It pours a little syrupy (a result of the molasses) with a thick, tan head. Nice malty aroma with a slight yeasty note. Rich brown color, with a red hue. Body starts off a little thick for a porter; rich maltiness with some burnt caramel highlights. Finish is a bit metallic (probably due to the molasses and some oxidation) that lingers momentarily. Overall it was a nice representation of a robust porter, but very much overboard on the molasses. It won’t be included in the next recipe.

User-Centric Saison: The BG Winter Saison experience starts with a “pop!” as the cork is removed from the bottle, releasing the high-pressure carbonation. The pour is water-like, with tight, fizzy bubbles. The head is white which quickly dissipates to a small ring around the glass. Golden in color, a bit on the darker side for a saison; the carbonation quickly releases an aroma of cinnamon, lemon, clove, and yeast.

First taste yields more flavors of cinnamon, citrus, and clove. Hints of the pilsner malt and some sweetness remains as the light body covers the taste buds. Crisp finish which leaves a hint of clove; a sign it is time for another drink. Overall the saison is a refreshing brew that reminds one of the winter season and all in all a very enjoyable brew. 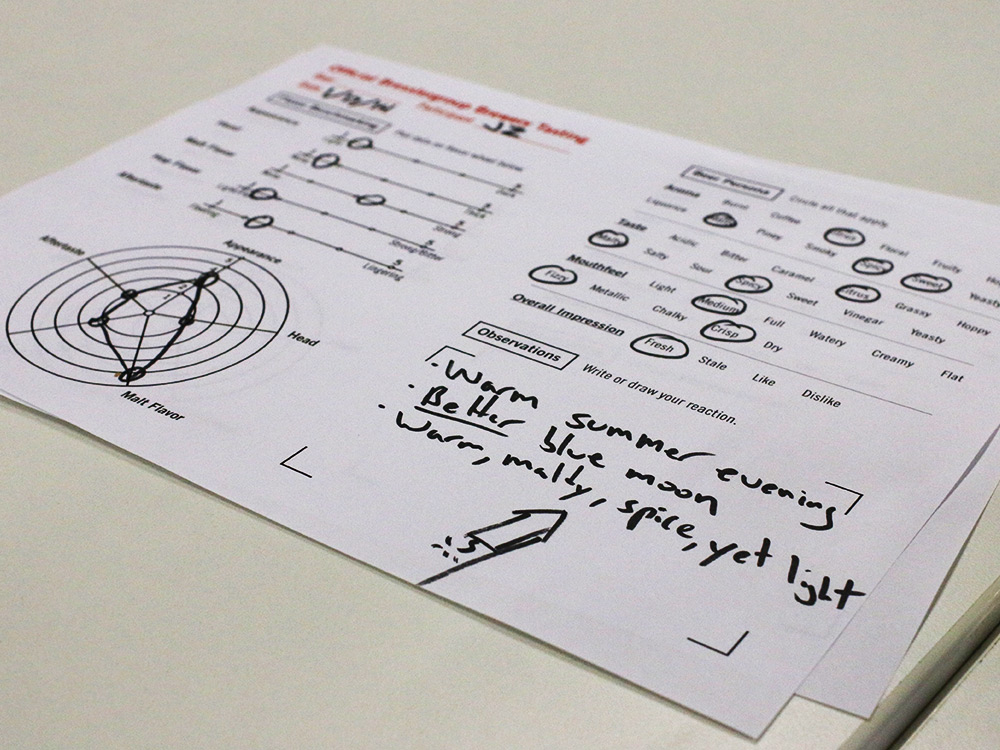