If you’ve ever had the misfortune of taking in an intensive care unit from the vantage point of a hospital bed, you might have been perplexed by the jumble of cables and tubes and the dizzying array of displays conveying information about your vital signs and medication delivery.

You need only look to the well-documented phenomenon of “alarm fatigue” to confirm the risks of doctors and nurses making life-or-death decisions in the middle of a highly distracting environment. Nurses with “alarm fatigue” neglect patient-monitoring alarms and other ICU medical equipment alarms, because seventy to ninety percent of them turn out to be false. Stats like that concern a lot of people, as each year more than five million individuals in the US spend time in different types of ICUs, from neo-natal to cardiac/coronary care. 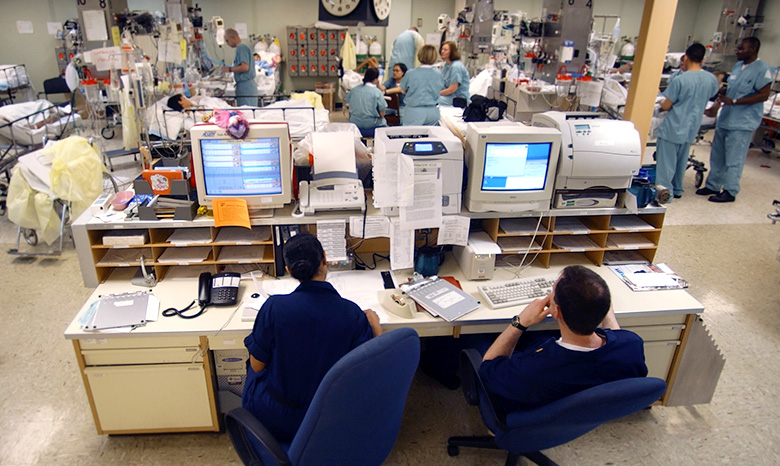 A typical scene at a typical ICU = information overload.

ICUs need a more integrated source of relevant information to help physicians make better decisions and fewer mistakes. This is the idea behind a study I got involved with last year. The question: “Why can’t an ICU be more like a cockpit?” sparked this collaboration between a group of human factors specialists, systems engineers, and ICU physicians.

Human Factors to the Rescue

Military aviation was suffering from a similar tangle in the early 1980s. The cockpit instrument panel was a mess. Aircrews were drowning beneath an ever-growing pile of flight instruments and controls and displays for communication, navigation, and weapon systems. You didn’t have to be a human factors expert to recognize the problem after an early form of GPS added to the P-3C Orion antisubmarine patrol aircraft forced the navigator to actually unharness himself to use it.

The solution was a human factors-based redesign. I was lucky enough to be on the P-3C Orion Navigator / Communicator crewstation re-design team. We started with a lot of in-flight observation and data recording to track what the navigator had to do, what he looked at, what controls he manipulated, and when. Once we understood the information needed and the task workflows, we combined the displays and controls from many of the communication and navigation systems into an integrated touchscreen that was placed in the primary reach and vision envelopes for the operator. 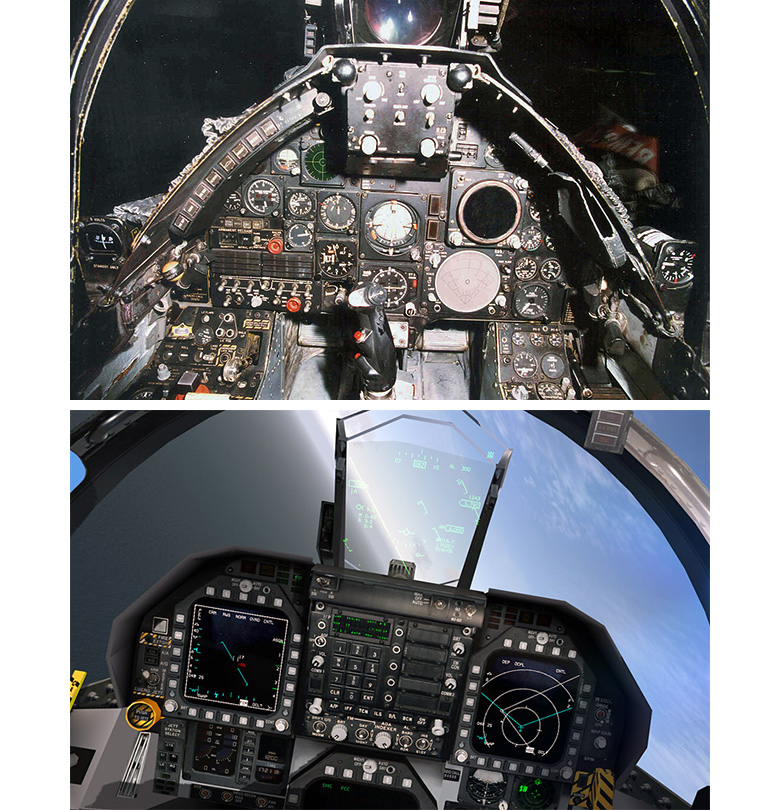 The modernized F/A-18 cockpit, bottom, with its integrated head-up and head-down displays, replaced the F-14, top.

Another example was our work on the primary flight displays — both head-up and head-down displays — for fighter and attack aircraft. The altitude, airspeed, attitude (whether the plane is pointing up or down, or banking right or left), heading (compass direction) and rate of climb all appear together in a single, integrated, centrally located display.

Information needed for a particular phase of flight — for example weapons status during a fight or landing gear status during approach for landing — appears only when relevant. As we worked through the design, we sketched up concepts collaboratively with pilots and flew them in a simulator later that day in rapid iteration.

Could this type of human factors analysis, design, and user testing also transform ICUs for the better?

Last year, I organized a conference panel session on the future of automation in healthcare. Naturally, I included an aviation expert (former colleague and Navy Aerospace Psychologist, Steve Harris) to discuss automation in aircraft where autopilot systems have been well established for decades and the subject of considerable controversy. After the panel, Yuval Bitan, a human factors engineer and management consultant, came up to Steve and me and asked, “Why can’t an ICU be more like a cockpit?” With Yuval’s deep knowledge of ICUs from prior project work, he explained to us how disjointed and disorganized the ICU information space is.

So we began the collaboration with some investigation. All ICUs are different, but here’s what we saw in one scenario: A ventilator helps the patient breathe, while various monitors track eight different vital signs. Meanwhile, five different drugs infuse into the bloodstream. Machines are beeping, flickering, and pumping. The patient’s records are kept in hand-written notes in a three-ring binder at a nurse’s station, while every treatment decision must be documented and entered into the patients electronic medical record via a computer in another room.

News You Can Use

When you’re in the middle of a dogfight, it’s not helpful to receive the signal that your landing gear is retracted. That’s not exactly, as we say, news you can use. Similarly, nurses, medical students, doctors, and pharmacists — who all participate in care decisions in an ICU — only need certain information at certain times. They do not benefit from bombardment by all of the information all of the time, especially if all of this information is ascribed the same level of prominence and scattered across a large, multi-room workspace. Having to weed through this mire to get to the critical morsel at the critical moment eats up seconds and interrupts flow.

Even better than delivering the relevant pieces of information at the right time would be to integrate the systems in such a way as to detect patterns — for example, in blood pressure, heart rate, and anesthesia delivery rates — that emerge in the data over time. Delivering these patterns might help practitioners prevent problems.

When I look at an ICU and see many different, unrelated electromechanical devices all jostling for doctors’ and nurses’ attention, it reminds me of where we were with aviation a few decades ago. A fighter pilot had to register each piece of information and synthesize them in his head. As with aviation equipment, the ICU, like many healthcare systems, evolved piecemeal. A cockpit designer’s job once entailed figuring out how to fit all of those standalone pieces into a limited space. Back in the ’80s we were asking, “What if these things could talk to each other and communicate?”

Is this a necessary mess? Yuval’s question made us wonder and lead to an initial study, hosted by Kingston General Hospital and Queens University in Ontario. We assembled a diverse team including ICU physicians, human factors specialists, and systems engineers who are working together to test a systems engineering approach to collecting and delivering relevant data to the clinical decision-makers in an ICU.

Our main goal is to see how we might be able to filter and display only the information they need and integrate this information in a way that helps them in their decision making. We wonder if other professionals such as first responders (paramedics, police, fire-fighters, etc.) who don’t have access to integrated information might benefit from such an approach, too.

Transforming ICUs for the Better

In our study, Engineering the Integrated Clinical Environment: Organizing Information in the Intensive Care Unit, we used three synchronized videos cameras to collect data. Just as we did in the cockpit work in the ’80s, we tracked the users’ — in this case, the doctors’ — tasks and workflow. We had the attending physician wear a video-based eye tracker, a technology originally created to gather human factors data for the aircraft cockpit redesign. A second person outfitted with a body camera with a wide-angle field of view walked alongside the physician and captured footage of her as she moved. A third camera on a tripod documented the scene from above. We used the cameras to track what the doctor looked at and manipulated during the decision-making process, from the pre-briefing before she sees the patient, through the physical exam, to the end of the debrief when she reviews and alters the plan of care for the next 24 hours. 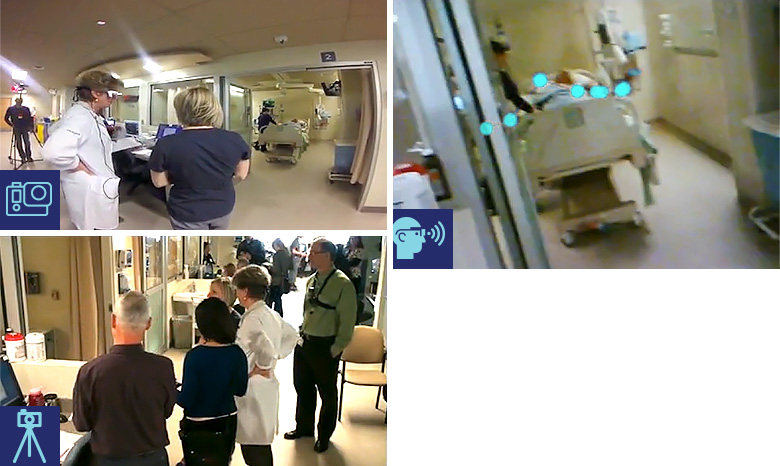 We tracked the doctors’ tasks and workflow using a body camera, eye-tracker, and tripod.

We interviewed doctors, nurses and other decision makers and used system engineering techniques to map out the way they think about a patient and how the various pieces of equipment in the ICU including patient monitors, the ventilator, infusion pumps, and patient medical record systems relate to that thought process.

With these data and our system map in hand, we started to think about “what ifs.” Should any of the devices talk to each other, or be combined the way altitude, airspeed, attitude, and heading measurements are combined in a modern cockpit display? What if the displays were organized differently, so the doctor and nurses didn’t have to walk between different rooms to gather different pieces of information? We also developed a cognitive map of the mental processes used by caregivers.

The next steps for the study will require gathering more data. ICUs can treat an extraordinarily diverse set of critical illnesses, from burns to blunt trauma to congestive heart failure. A broader data set will let us identify which patterns of information use are truly universal in ICUs, and which are restricted to specific circumstances. We also hope to interview more care providers to see if everyone works from the same type of cognitive map, or if there are different styles that vary between people or specialties.

Physicians and fighter pilots share certain qualities: they’re skilled at making tough decisions under pressure, and they’re self-reliant. It may not initially occur to either of them that they could benefit from a human factors analysis or systems engineering approach to a redesign.

But a systematic, repeatable method of gathering data can lead to great improvements in the design of both the technology and the overall system used by these or by any industry that has evolved into a tangle. Cockpit modernization is a sterling example. Streamlining the ICU could be another. We believe that an enterprising hospital, working hand in hand with industry partners, can demonstrate how this systematic approach to integrating information can generate an ICU with superior usability, safety, and effectiveness.