The hallmark of the Internet of Things is machine-to-machine (M2M) communication. Shipping containers will report to their hubs, rain gauges will inform irrigation systems, and your solar panels will talk to your utility.

Small pieces of information communicated relatively infrequently can transform how the world works, making things and services more efficient, and easier to use. But even the best communicators need some way to get their message out. IoT devices need a way to talk to each other.

Why Cellular Is On Its Way Out

We already have an obvious method for distributed networks of machines to communicate; our mobile phones use cellular modems. Many existing IoT devices use the 2G or 3G cellular standards for machine to machine communications (M2M), but those are being phased out in 2017 and roughly 2020 respectively.

Many existing IoT devices use the 2G or 3G cellular standards for machine to machine communications (M2M), but those are being phased out in 2017 and roughly 2020 respectively.

Relatively speaking, cell modems are expensive, compared to other wireless technologies — largely because of the complexity required. The current examples of 4G modem modules can cost approximately $40 and can draw a significant amount of power (think how often you have to charge the battery in your phone).

For most machines in the IoT, the incredible capabilities of cellular modems are overkill. Cellular phones transmit audio, stream video, and allow us to play interactive games on the Web in real time. Contrast that with something like a solar panel that simply needs to transmit how much power it generates to the utility database once a day. 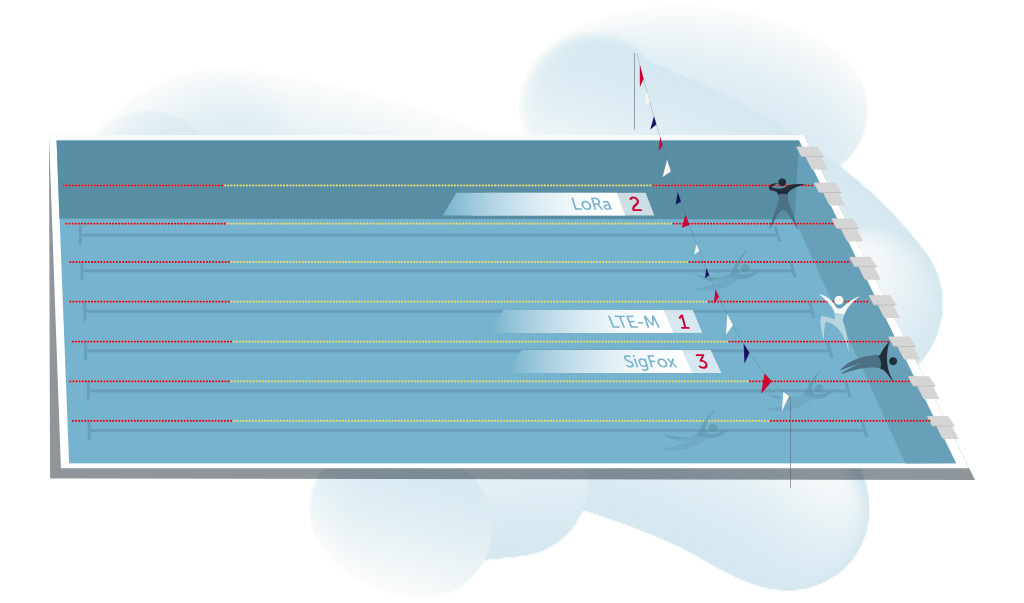 The LTE standards body and cellular modem industry has already defined a low data rate alternative called LTE-M. This is a lower power, lower data rate alternative to LTE that is intended to address the needs of simple, low power applications. Unfortunately, the standard is not scheduled to be deployed until mid-2017, which in the fast-paced landscape of the IoT, is quite a way off.

This leaves cellular network providers in a bad spot; designing products for a standard that is being shut down limits a product lifetime, and the standard 4G modem connectivity is costly and power hungry. Until LTE-M modems have service rolled out nationwide for devices to connect to, the cellular options for connecting to the cloud seem to present dauntingly difficult choices.

The cellular modem industry has already defined a low data rate alternative called LTE-M., but the standard is not scheduled to be deployed until mid-2017 — which in the fast-paced landscape of the IoT, is quite a way off.

As an engineer, using a cell modem to communicate the tiny amounts of data needed for simple applications just seems clunky. So it’s good to see two alternative formats, narrow-band technologies specifically designed for machine to machine IoT devices, entering the U.S. marketplace right now: SIGFOX and LoRa. Cheaper and more robust than the cellular modem, both are based on radio transmission in the Industrial, Scientific and Medical (ISM) radio band; 915 MHz in the U.S. Both meet the challenge of connecting devices over long distances and accommodating low-power hardware. 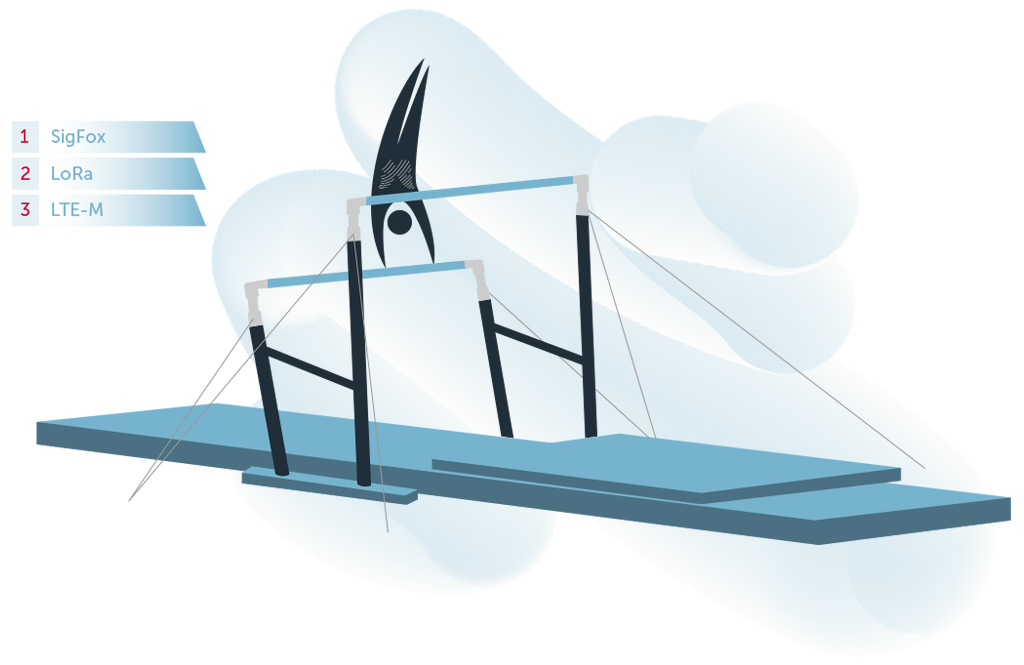 From a radio perspective, SIGFOX and LoRa are similar. Both transmit in the ISM band, using frequencies between 902-928MHz in North America. This band is open, like CB radio; nobody owns these frequencies or can have exclusive rights to them. This means there’s no need to fight over bandwidth the way cellular networks do, but it also means a higher risk of interference. To avoid it, both SIGFOX and LoRa are required to communicate in short chirps 0.4 seconds long or less.

The major technical difference is that SIGFOX uses ultra-narrow band transmissions — it’s highly unlikely anyone else in your immediate area is transmitting on, say, a very small frequency band, centered on 903.1MHz at a particular moment. Each SIGFOX chirp can carry about 12 bytes of data up to 140 times per day, using frequency shift keying to encode the data.

LoRa, on the other hand, uses a chirp spread spectrum approach, distributing information across the transmission band. The LoRa data chirp includes forward error correction, so, even if you miss a symbol from interference, you’ll probably be able to rebuild the rest of the message.

Data rates on LoRa range from 300 – 50k bits per second, depending on the configuration of the chirp. Partly because of the spread spectrum approach, LoRa has an edge in noise immunity — meaning it can successfully function in adverse conditions (signals bouncing, other radios, etc.); SIGFOX requires the received radio signal to be about 18dB above the radio noise floor to be decoded, while LoRa can operate 18dB below the noise floor. The transmitters in either system use so little power, they can run for years off a couple of AA batteries.

The Race for Worldwide Dominance!

The other differences between SIGFOX and LoRa are more on the business side — the two are in a bit of a race to claim worldwide dominance. SIGFOX owns the base stations for their radio traffic that act as the interface to the Internet; they provide the connectivity services to the client devices. As the service provider, they can build out the network worldwide, but end users cannot own their own network. This business model is similar to cellular radio, and the two will be in competition for future M2M device connectivity.

SIGFOX already operates a large network in Europe, covering mostly France, Spain, Ireland, and the Netherlands but is expanding east quickly. The company says it plans on expanding into 100 U.S. cities this year, but so far has been sketchy on details — San Francisco and San Jose are the only cities with coverage right now. To get on the SIGFOX network, the radio equipment costs about $2 per device and connectivity costs about $1/year. The first company in the U.S. to adopt the SIGFOX network, WhistleGPS, uses the technology to track dogs in the San Francisco and San Jose area. Other potential clients include operators of environmental sensors and water systems.

The first company in the U.S. to adopt the SIGFOX network, WhistleGPS, uses the technology to track dogs in the San Francisco and San Jose area. Other potential clients include operators of environmental sensors and water systems.

LoRa, on the other hand, encourages users to build their own networks, while providers build out independent networks using the same standards. The base stations are smaller and less expensive — as little as $20 each, and each station can cover a large area. In a noisy urban environment you might need them about a mile or so apart, while in less settled parts of the country you could get away with a station every 9 miles. Since LoRa does not control the network, once you own the stations, there’s no need to ever pay anyone for connectivity again. This could be the perfect solution for a company that needs to track a fleet of delivery trucks that roam over a specific area like a few counties, for example.

There is also a growing group of companies, including Cisco and IBM, called the LoRa Alliance that are banding together to build out a worldwide LoRa network. Other companies are stepping into the fray to build out LoRa network coverage in the U.S. independently as well. 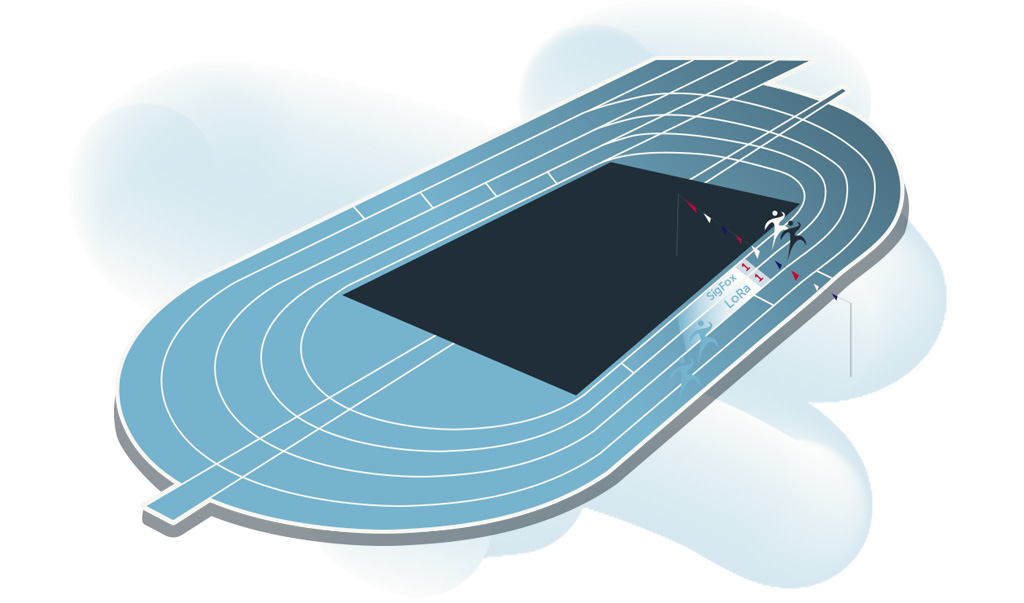 SIGFOX, LoRa, Or LTE-M: Which Is the Best Format for Your Device?

Although the competition between SIGFOX, LoRa and LTE-M could turn into a three-way Betamax versus VHS battle of the 21st century for IoT devices, it’s more likely that different formats will appeal to different business models.

Do you and your customers need a large, widely dispersed network like SIGFOX’s that promises to cover the entire continent but requires yearly subscription fees, or would a smaller LoRa network owned and operated by your own company be more desirable? Do you need the greater signal reliability of LoRa over SIGFOX? How much data do your devices really need to transmit, and how often? If you have higher data rate requirements, or very wide coverage needs, cellular may be the better choice. Keeping these considerations in mind will help you make the best choice for your company and device.