I’ve been participating in robotics events for years – first as a student/mentee and now as a teacher/mentor. I keep going back. Here’s why:

1. It reminds me of how I got started.

My favorite place to be last summer at Camp Invention Moorestown was the Disassembly Room. The students brought in stuff they weren’t using anymore — a VCR, a radio, even an original Xbox — and took them apart. It was all about teaching kids not to be afraid of taking things apart in the service of curiosity or making the devices better. This was fun because I got to see how sharp these young minds are — one even started telling me how rare a certain crystal was, and pointed out many components on the printed circuit board. 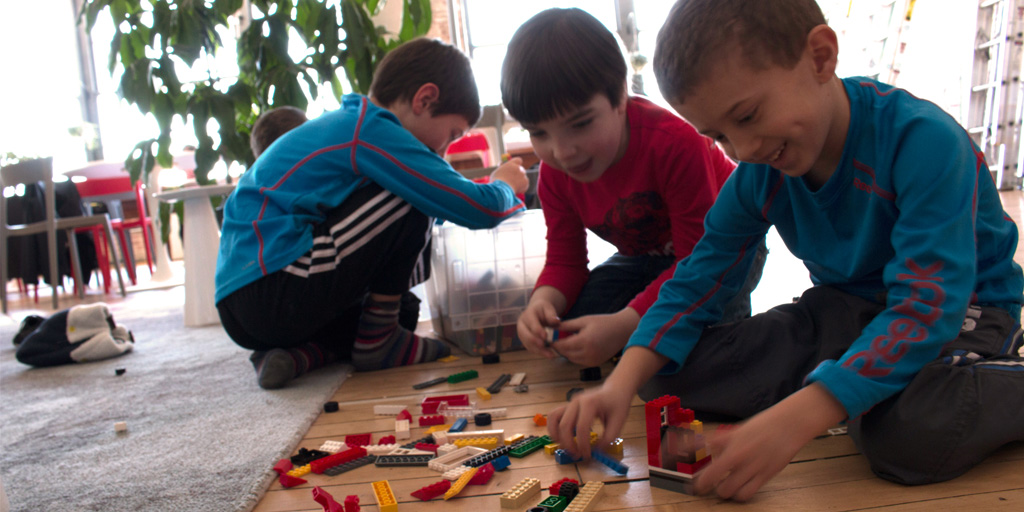 This experience was also my favorite because it’s how I started. When I was little, I would take stuff apart — this was the culture of my house. My brothers and I took apart a computer when I was just a youngster, and that was when I caught the bug. If something broke — blender, printer — I’d take it apart and try to figure out how the thing worked. Sometimes I even fixed it, like when our band of brothers fixed our busted Xbox.

This year was my 2nd mentoring my alma mater’s team – Malvern Prep Team 1168 – while they prepped for the FIRST Robotics competition. For six weeks I spent every Saturday morning and usually afternoons there, fielding any technical questions while they built their Friarbot (named after the school’s Augustinian friars). 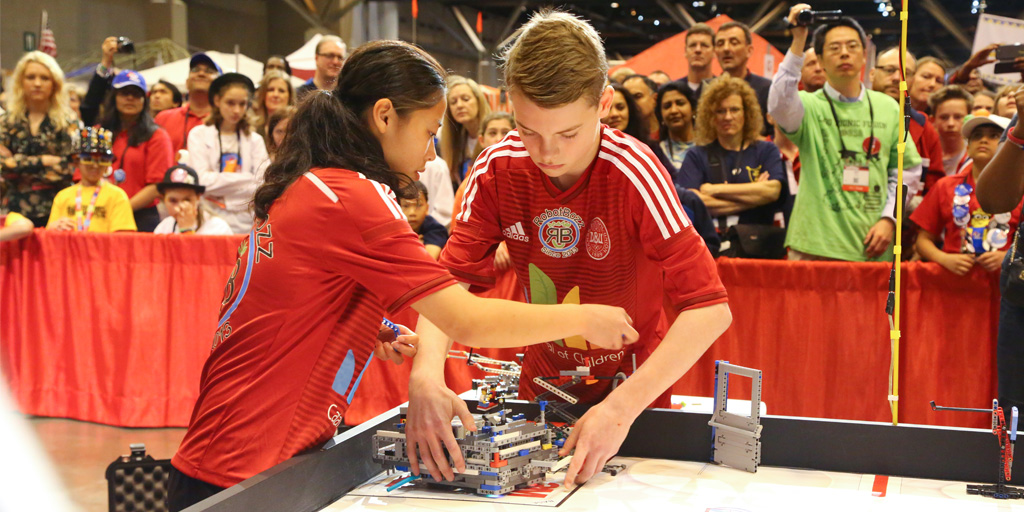 It was exciting to teach them something one week and see them put it into practice the next. One week, we investigated a motor driver failure. Not only did we fix the first issue, which was a software bug, but we also learned about the motor braking feature, which can help hold the motor in a static position. The following week, the team called on that knowledge to create a robotic arm that was easier to manipulate and hold in a position.

It was exciting to teach them something one week and see them put it into practice the next.

We mentors mainly hung back and let the students drive the whole thing — programming, wiring, mechanical — and they even did all fabrication in-house. As mentors, we’re there to teach safe use of the power tools and advise on any technical aspects they may be unclear about. However, we let the students make the design and strategic decisions for their team, even if we believed it had a lower success rate. They learned a lot this season, from both successes and failures, just like my team did all those years ago.

3. The creativity and collaboration factor.

The creative process is so important, and it’s something you get better at the more you do it. You could sit on your phone or on Minecraft all day, or you could be somewhere, collaborating with a team to design a real-world product.

The Hacktory’s Robot Universe Showdown, where I was a judge earlier this month, was inspired by Hebocon, a Japanese robot sumo-wrestling competition where quirky, low-tech robots are celebrated and highly complex technical robots are penalized. The focus is on slapping something together quickly that works and getting it into the ring rather than knowing about high-level programming and sensors. 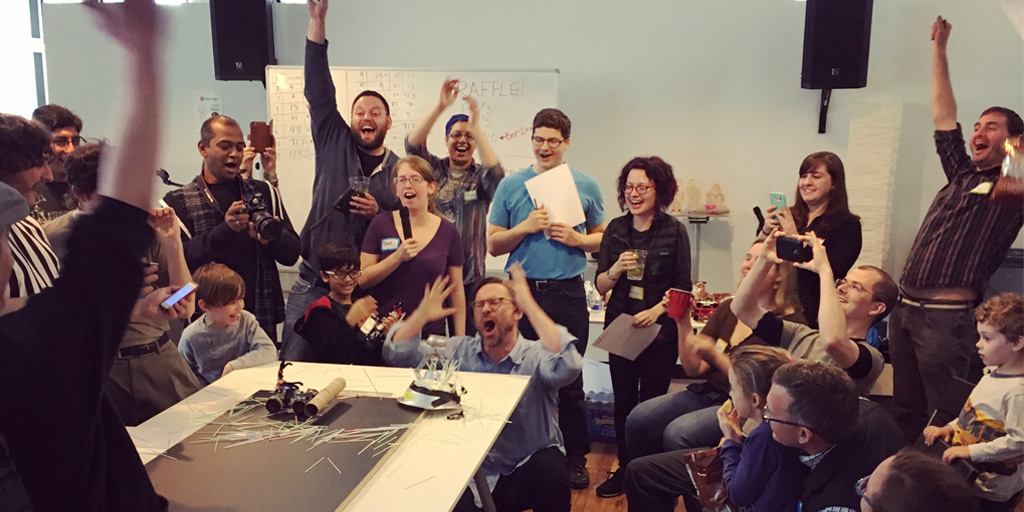 The ‘bots were bumpin’ at the Hacktory’s Robot Universe Showdown!

A challenge like this is great practice for how to approach problems in the real world. There are always about twenty different possible solutions, but sometimes you can do really clever, outside-the-box things. These usually happen when you’re talking back and forth with your team and bumping heads to say, How can we tackle that?

The creative process is so important, and it’s something you get better at the more you do it.

The two most clever designs used a basic feature — spinning in place — to win their matches. The other competitors focused on speeding forward in a straight line to push their competitor off the board, but they were quickly turned off course by the robot spinning in place.

Most of the mentoring I do is in the context of robotics competitions. I’ve noticed that competitions get kids familiar with the basics — what’s the least amount of functionality that can achieve the goal? You can’t be excellent unless you figure out the basics and improve incrementally from there.

You learn quickly that you have to have a base to fall back on. If you’re going to have a robotic arm to slam dunk for bonus points, you’ll never get to the hoop without a drive train. This has corollaries in the real world. It’s why we have a version control system for our software — if we introduce a bug into the system, we can go back and compare our source code. With this approach, we can build a stable code base and add features from there. 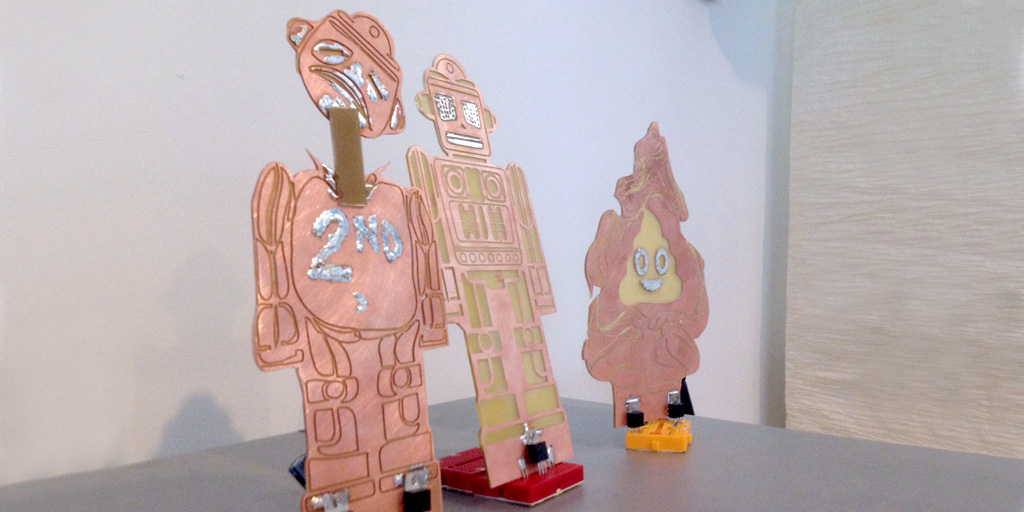 1st, 2nd, and 3rd place in the Robot Universe Showdown.

My Malvern Prep physics prof, a Navy vet, was a great commander. As boisterous teenagers on a robotics team, it was easy to neglect some of the fine print in the rulebook. He taught us to be cognizant from step one of our ‘bot passing all safety regulations. Otherwise, we could miss competing in matches while trying to pass safety inspection.

If you’re going to have a robotic arm to slam dunk for bonus points, you’ll never get to the hoop without a drive train. This has corollaries in the real world.

This lesson in careful preparation resonates in the workplace. At Bresslergroup, I’m now working on a project that uses a large amount of power. Our team has to think at every step of development about it passing safety certifications. How do we ensure all this work we’re doing will pass regulations once the client brings it to market? If it doesn’t, all our work will be for naught.

With the right mix of collaborations, creativity, and competition, you’ve got a recipe for an exhilarating tournament.   At the Robot Showdown held at the Philly co-working space, Ventureforth, we got the audience engaged by announcing the robots’ names and giving a detailed play-by-play as the mechatronic creatures sparred on the central table. The place was bumpin’! People were shouting and cheering for the robots, who they soon knew by name – Raptor, Cyclone, and Battling Rad, to name a few. It was as exciting as a tight basketball game – everyone picked a favorite to root for.

These events remind me how exhilarating it can be to make things. Look at the excitement on the faces of these Robot Showdown competitors. There’s nothing else like it! 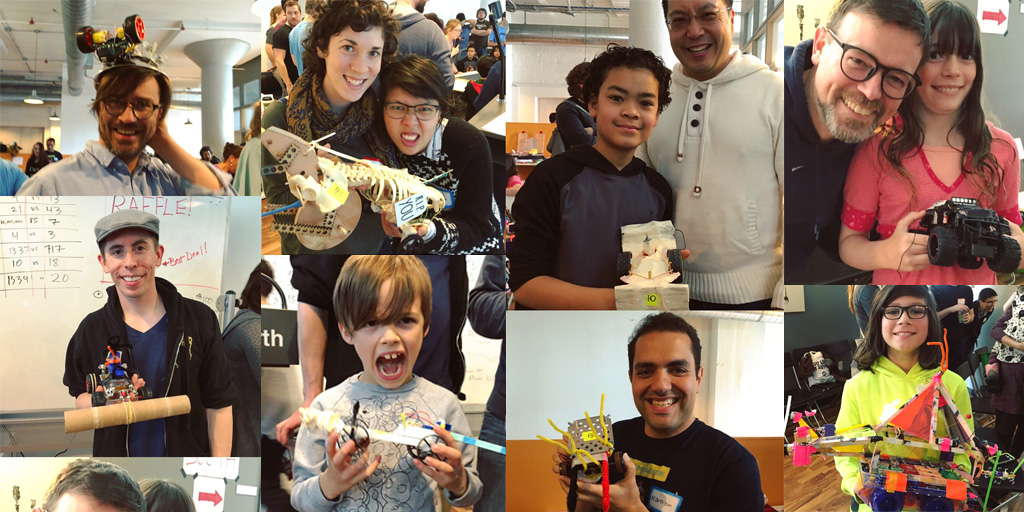 (This post is part of Curiosity Club, a series where Bresslergroupers go exploring and ask questions. Do you think Albert Einstein, who claimed, “I have no special talents. I am only passionately curious,” would’ve liked robot sumo-wrestling?)