When we drive over a bridge, we tend not to even think about it falling down, but there have been spectacular failures. The most notorious in the U.S. was the original Tacoma Narrows Bridge built in 1940. Immediately after the bridge opened to traffic, the roadbed began to undulate in gentle, rolling waves, giving drivers quite a ride and leading to the nickname “Galloping Gertie.” But the waves turned violent just four months later during a wind storm and the bridge tore itself apart. The problem was torsional flutter. Translation? Twisting in the wind.

If only the Tacoma Narrows Bridge engineers had been able to do computational fluid dynamics (CFD) analysis. CFD simulates the flow of fluids such as air (to engineers, air is a fluid), gas, and water. The equations describe such sticky subjects as viscosity and vorticity, making them nonlinear even in two dimensions. Calculating them for three-dimensional, real life situations takes a lot of computing power, something engineers in 1940 didn’t have.

The Tacoma Narrows Bridge, aka “Galloping Gertie,” twisting in the wind.

From Space Shuttles to Hair Dryers

In its infancy CFD was complicated, expensive, and challenging so it was only employed for complex projects like bridges and the space shuttle — but today engineers use it to optimize everyday products that incorporate the flow of air, gas, and fluids. These include your computer, consumer electronics (TVs, smartphones), and home appliances and equipment (lawn sprinklers, dishwashers, hair dryers). It’s still complicated, but abundant computing power has made CFD analyses much quicker and less expensive. A good CFD analysis pinpoints potential fluid flow problems before the design gets to the prototype stage, which means getting it right is now faster and cheaper. What used to take months now takes only a few hours.

By modeling instead of testing empirically, we are optimizing a design and building just one or two scale models to test the final concept instead of wasting time and money building dozens of prototypes. A 2008 report by Aberdeen Group found that engineers who use three or more different types of simulations such as CFD, “are able to reduce the number of physical prototypes by 37%,” leading to cost reduction of up to $332,673 and a reduction of up to 118 days from the development process.

At Bresslergroup we use CFD for a range of products. Here are some of the problems we rely on it to solve:

Modern electronic devices pack a lot of computing power into relatively small spaces. All that power produces heat. CFD analyses can reveal minor tweaks that allow a device to stay cool even under stress. For example, Microsoft used CFD to simulate airflow through its new Xbox One gaming console. Designed to be an all-in-one entertainment center slash home internet hub, in many households the Xbox One could get near-constant use. 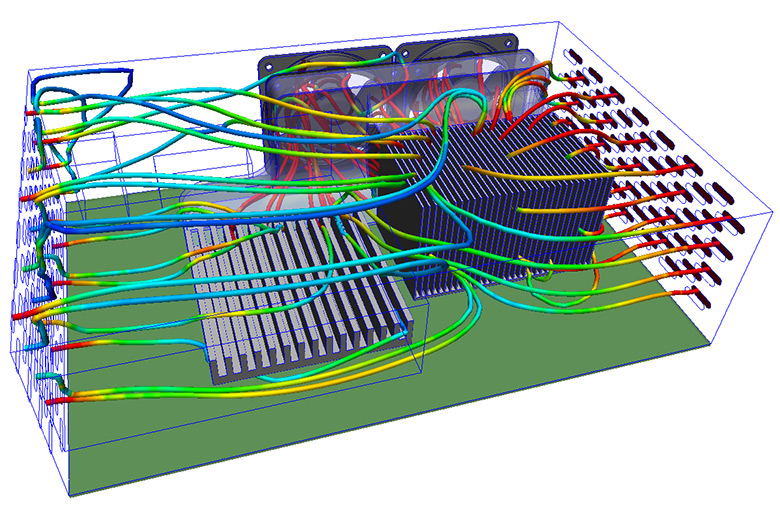 Worried that the console was so unobtrusive people might forget it was there, the engineers ran CFD analyses to anticipate every possible way users could accidentally sabotage the cooling system. The results guided them to a console designed to sense its own temperature and dial back its power consumption accordingly, to the point where it needs almost zero airflow. The CFD analysis also led to a larger fan. The large fan eats up space, but it can move more air than a smaller fan while spinning more slowly, keeping the XBox cool and quiet.

CFD also excels at pinpointing turbulence. Whether we’re designing a heating and cooling system for an office, a smartphone, or a lawn sprinkler, turbulence is not our friend. Before CFD, engineers used smoke to trace airflow around vehicles or through ducts. Now we can use CFD simulations to accomplish the same thing in greater detail, mapping the exact path of a particle though a system.

We can run the simulation over and over with small changes each time, and immediately see the effects. CFD shortens the time and effort to find the smoother airflow to reduce both drag and the size of necessary fans and vents in a heating or cooling system, giving us more space for the good stuff. In a sprinkler head that Bresslergroup designed, it let us simulate water flow to ensure an even spray pattern for good water coverage.

Among other projects, we’re using CFD to improve the design of a water heater that needs optimal heat exchange between two different fluids: air and water. How do you get the heat from the hot air into the water most efficiently? Imagine a radiator that acts in reverse, using hot air to heat water. CFD simulations are helping us visualize the air, heat, and water flow — and the temperature fluctuations — in real time so we can evaluate the product’s efficiency and optimize the size, shape, and features of the heat exchanger part.

Don’t Get Left Twisting in the Wind

There’s a lot to tinker with in heating (and cooling) devices, and making a lot of prototypes can be prohibitively expensive and time-consuming. CFD simulations let us test the equivalent of a new design at much lower cost. The technique doesn’t replace prototypes entirely, but it does help us find the best options — before we waste a lot of perfectly good metal. CFD can bring similar efficiencies to the design of almost anything else that depends on fluid flow.

(On-Ramp is a series illuminating engineering techniques for product development.)