We’ve been thinking a lot about branded interactions, or interactions that express a brand’s values. These can be purely physical (the pop of a Snapple cap); digital (Netflix’s one-button unsubscribe); or digital-physical (Tesla’s door handle). (See below for more about these examples.)

They can appear at any touch point in the end-to-end product experience. Some are core functions — interactions that are performed many times a day. Others are designed for maximum impact at a key touch point, such as unboxing or first use.

The good ones have the following in common:

• Emotion. They evoke emotions that are positive and memorable, and that strengthen the relationship between a person and a brand. Microinteractions can provide tiny, repeated visceral delights. Disruptive interactions can completely transform how people interact with a product or service.

• Authenticity. They tie directly back to brand values, and faithfully express brand personality. They demonstrate to a customer what a brand considers to be important and worthwhile.

• Consistency. Building trust is crucial to a brand. Without consistent interactions, customers won’t know what to expect. Consistency of interaction across all touch points is difficult to pull off, but when done well, it’s extremely powerful.

• Technology. Most wouldn’t be possible without relatively recent technology such as touch-sensitive surfaces (Moen faucet). The interactive landscape is already shifting away from digital interactions in favor of ambient experiences and interactions enabled by sensors (iPhone’s Fingerprint Touch ID, Tesla’s door handle).

To explore this topic, we polled the office on favorite branded interactions and narrowed everyone’s nominations down to 15 brands who do it well. Here’s the list of brands and the interactions we consider to be successful: 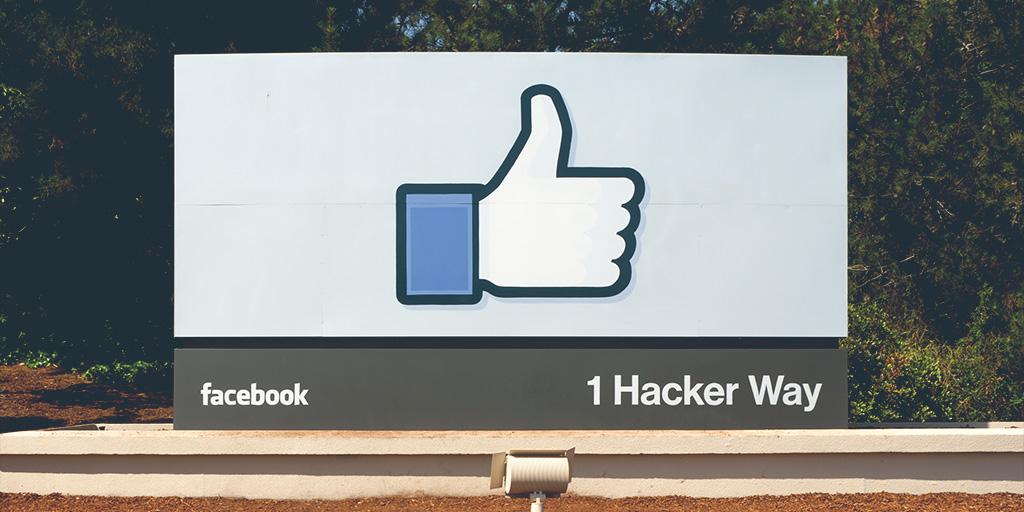 The “Like” interaction is so instantly recognizable as the universal symbol for Facebook, its thumbs-up icon is all that’s needed on the company’s Menlo Park HQ signage.

Facebook, a company with a very robust brand identity, has many other interactions to choose from, but one notable series enlivens its Messenger app, which, says electromechanical engineer Nick McGill, “uses some really enjoyable popping sounds and dings to let the user know when they’ve sent their message; when it’s been successfully delivered; and when the other person has read the message.”

Obviously the sheer number of people using Facebook contributes to Messenger’s popularity, but how much do these interactions add to its success? How much do they serve to strengthen a user’s connection to Facebook?

Having just gone through our own brand refresh, this Co.Design post on how Facebook unified its brand is an interesting read. Like Facebook, we’ve left our brand identity open to further interpretation as our brand evolves. 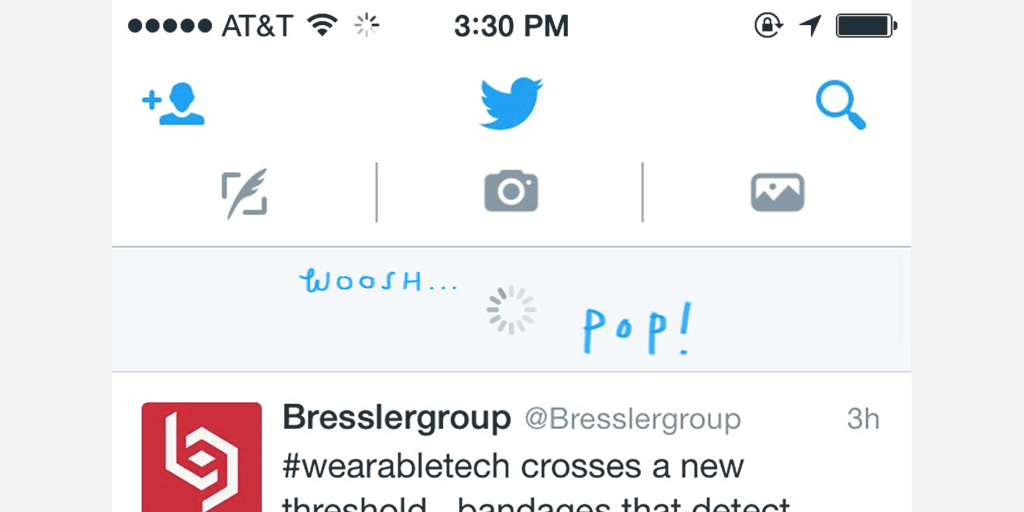 The sound Twitter’s mobile app makes when you refresh your feed has enough of a fun factor that people try to reenact it on social media. 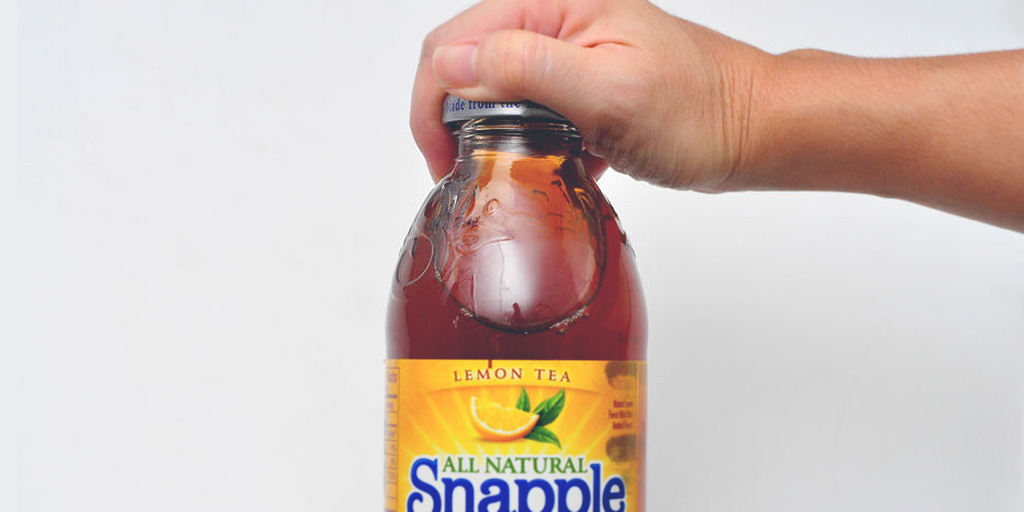 Auditory interactions are always a consideration, no matter what type of product we’re developing. They have impact across a diverse mix of physical, digital, and digital-physical products. Some companies now employ acoustic engineers to determine product “soundtracks.”

The scritch-scratch sound a Sharpie makes on paper is part of the experience of using that product. So is the Snapple “pop” when you unscrew the cap.

Even when you hear these sounds out of context, such as in a TV show or movie, you know exactly what they are. As for Southwest, the company branded and pretty much owns the ubiquitous “ding,” which reminds you of Southwest while on every other airline.

And we all know who owns Snap, Crackle, Pop. 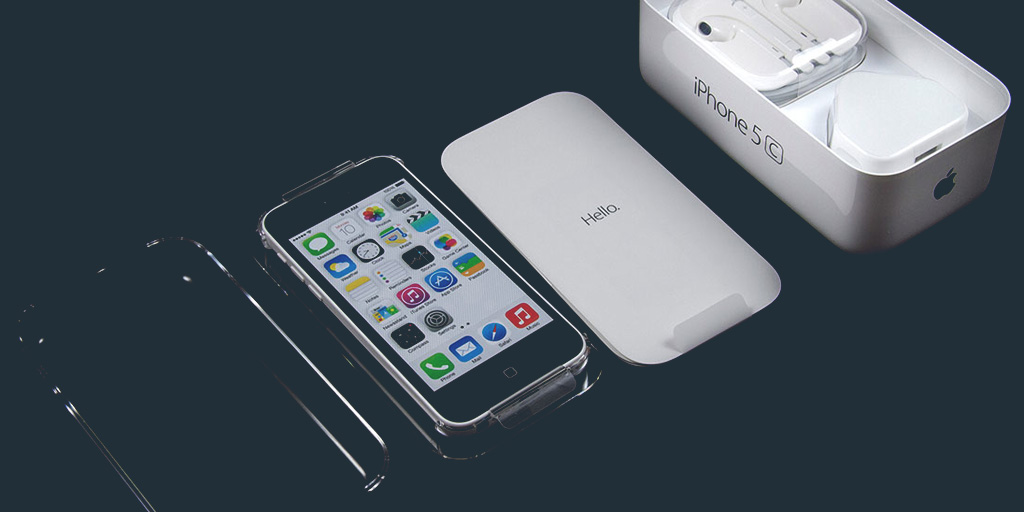 Unpacking an Apple product has been described as “a holy experience.” That was written by someone at fan site, Cult of Mac, but most Apple users can identify. The company’s attention to detail in crafting the unboxing experience creates an emotional response that turns customers into evangelists.

The environment inside Apple’s packaging room has been well-documented as has its mission: to develop the box that elicits the perfect emotional response upon opening.

The simplicity and usability of the packaging echoes the messaging in Apple’s marketing, which aims to make technology accessible and appealing. Technically complex products are packaged like fine jewelry, and product descriptions are framed in terms of user benefits (1,000 songs in your pocket) as opposed to technical specs (five gigabyte drive). And the company patents its packaging along with many technical and design patents, because it recognizes packaging is an equivalent asset. 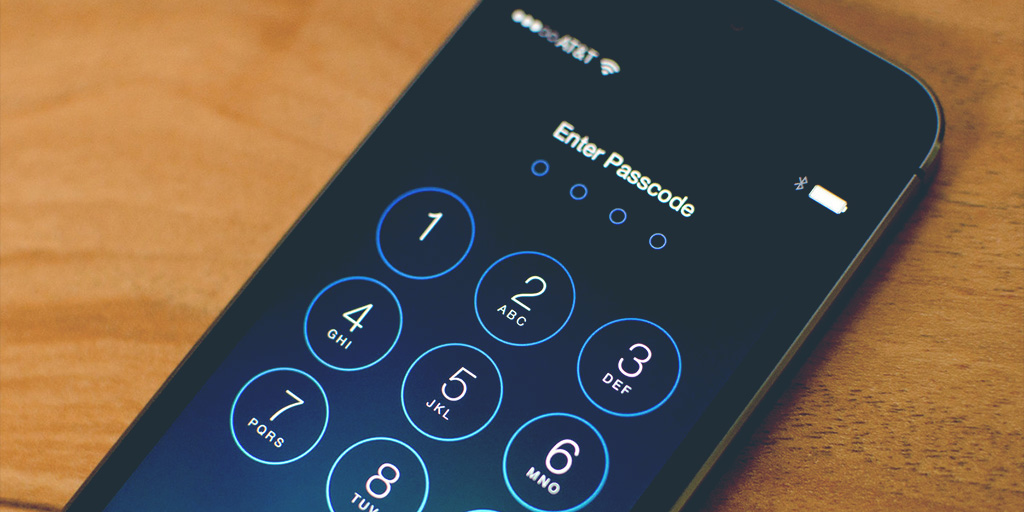 Mechanical engineer, Bre Stachowski, admires the way the iPhone notifies you when you’ve entered the wrong password — it vibrates, and the four dots “shake” clean as if they’re shaking their head, no.

The fingerprint sensor and the function of holding down the lock and the main buttons for a screen grab also got kudos.

They magically extend when they sense the key is nearby. 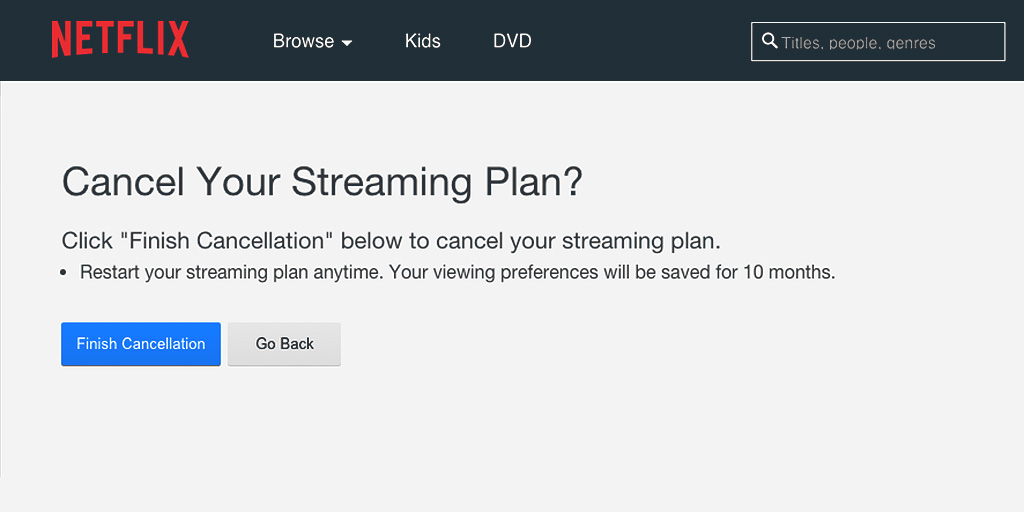 Ease of cancellation figures big in Netflix’s brand promise. We weren’t in the room but we’ve led enough brand workshops to know this promise was partly created when the company pondered how it might differentiate itself from powerful, entrenched competition. In the company’s “Long-term view,” a manifesto of sorts, it states:

“We are a relief from the complexity and frustration that embody most MVPD relationships with their customers. We strive to be extremely straightforward. There is no better example of this than our no-hassle online cancellation. Members can leave when they want and come back when they want.”

If Netflix were a person, its friends might describe it as generous. The simple and easy one-button cancellation interaction is a well-executed expression of generosity.

Interactions like these establish the relationship between customer and brand as casual and fluid, as opposed to rigid and oppressive. When cancellation is that easy, signing up again is easy too; after all, it’s easy to cancel again. 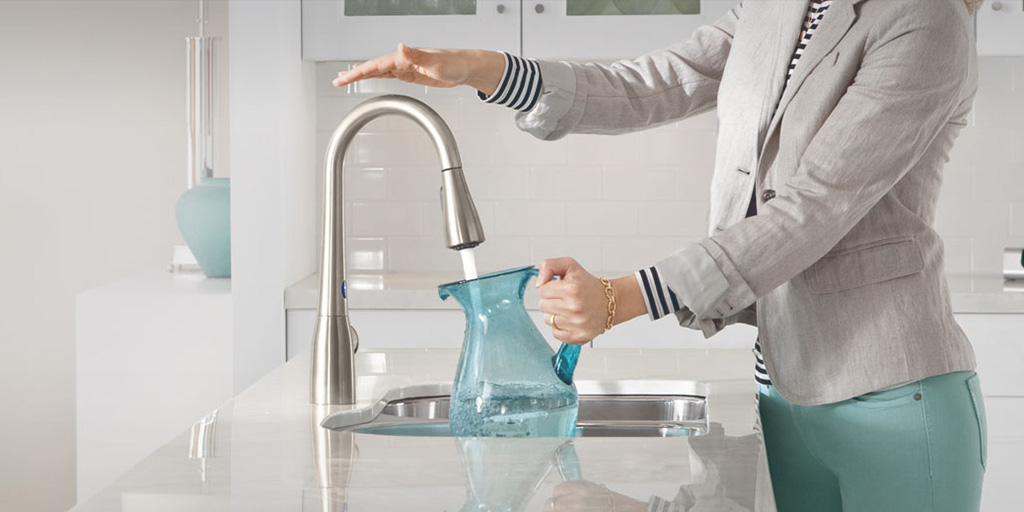 If you own one, it changes the way you interact with faucets — you’ll try to turn on every other faucet on by waving your hand over it before you realize it’s not like the faucet in your kitchen. Call it the “touchscreen effect.”

In the mobile app, when the user presses the Shazam logo to capture a song, it animates as it “listens” to the song being captured. Like “Google,” “Shazam” is often used as a verb: to Shazam a song. 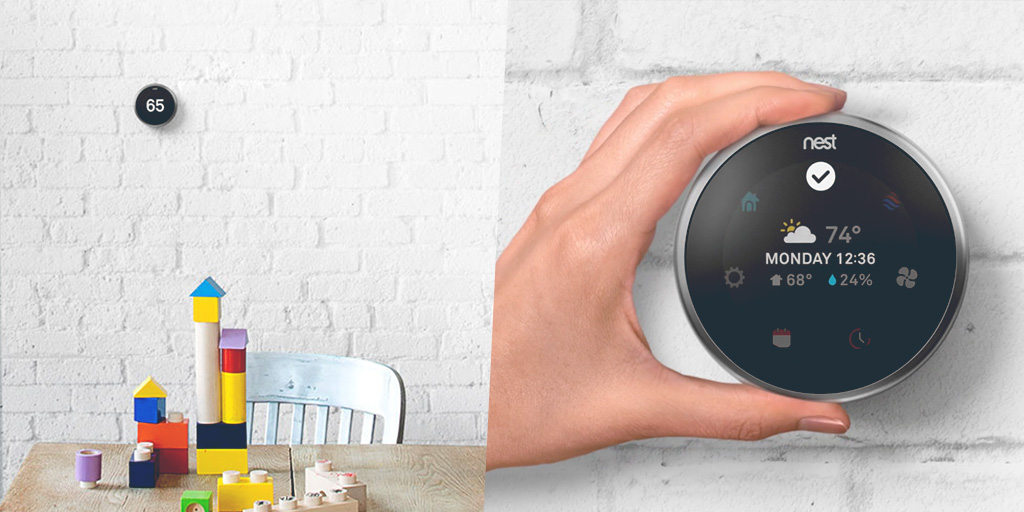 Farsight, integrated into Nest’s 3rd gen, adjusts the thermostat’s user interface based on how far away you’re standing. Prior to Farsight, you had to be three feet or closer to the unit in order for its interface to detect your presence and “wake up.” With Farsight, you can be up to twenty feet away, and it activates a larger, more legible display when it senses you’re at this greater distance. This feature amplifies the “thoughtful” part of Nest’s triumvirate of brand values: simple, beautiful, and thoughtful. 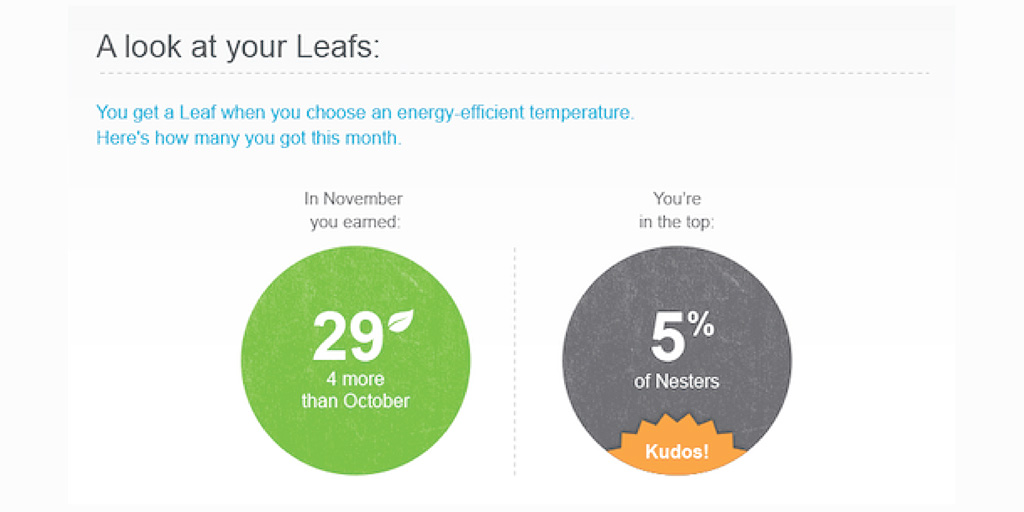 Senior interaction designer, Matt Ambler, also likes the gamification built into Nest’s user flow – monthly emails goad you on by reporting your savings and your accumulation of “leaves,” earned when you choose energy-efficient temperatures. The monthly report also tells you how your leaf-collecting measures up to all other Nest users — an unexpected, playful interaction that is delivered just frequently enough. 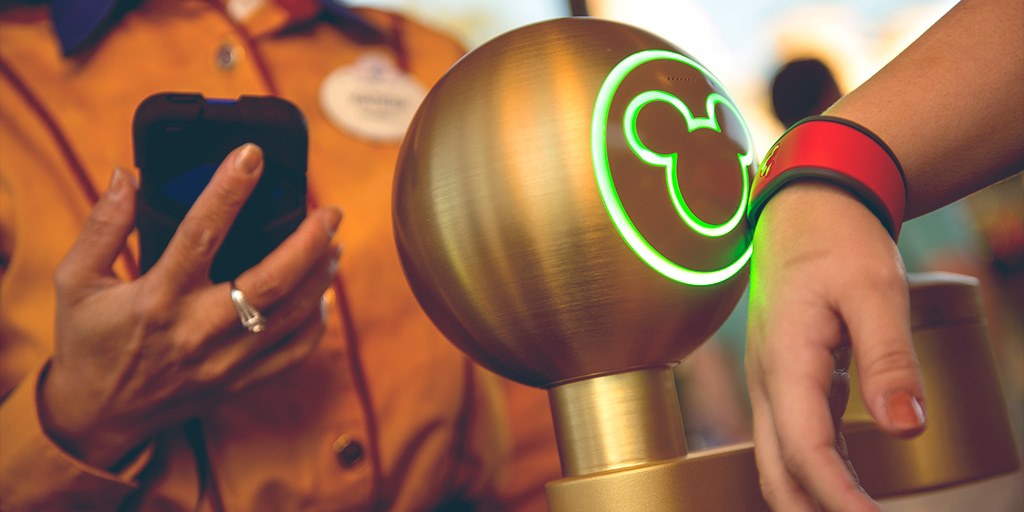 “The most magical place on earth” lives up to its superlatives with a new way to deliver personalized, delightful interactions that really do feel like magic.

A simple, low-profile wristband with an RFID chip communicates with sensors throughout the park, which match users to their accounts, reservations, and preferences. Arrive at a restaurant and the server will greet you by name, tell you to sit where you like, and your food will “magically” find you. This is just one example of an entire ecosystem of magical, delightful interactions made possible by this simple band.

(For more on branding and interaction design, watch my webinar: Brick by Brick: Brand-Building Through Interaction Design.)