What comes to mind when you hear the word, “atomization”?:

If you chose a), you have a large vocabulary and/or remember when life was more elegant. If you chose b), you’ve been watching too many Lost in Space reruns. If you said “c), duh!” you’re obviously an engineer. And if you chose d), well, we hope you realize your Internet satellite dish gives away the location of your bunker.

When engineers talk about atomization they usually mean option c), but more generally the term can refer to any process that breaks up a liquid or powder into spray, mist, or vapor. Perfume bottles, for example, force liquid perfume through a nozzle under pressure. Nebulizers use ultrasound or high-speed vibrations to break up fluids into mists.

And powder coating is a good example of electrostatic atomization, where powder flows through an electrical field and the individual particles pick up a charge. The charged powder particles repel each other like the positive ends of two bar magnets. Instead of sticking to each other, they seek out a grounded object and spread themselves evenly over its surface.

To determine which method to use, first determine what the client needs. The material to be sprayed will proscribe some possibilities, and the client’s requirements will determine others:

The most common, least expensive technique uses pressurization and a finger pump to force liquid through a nozzle. A bottle of Windex is a common example. The drawbacks include an inconsistent droplet size and an uneven spray pattern, which tends to be denser towards the middle. Aerosol cans pressurized with a carrier gas (think spray paint) can improve droplet size and spray pattern. But building a plant to charge aerosol cans is a huge capital investment that not every company wants to take on.

If your small child has ever needed to inhale a medication, you’ve probably used a nebulizer. Nebulizers use ultrasonics or compressed air to make small vibrations that break up a fluid into tiny droplets below the aspirable limit—medical terminology for particles small enough to be inhaled into the lungs.

Ultrasonics are good for when your client requires a more consistent, finer spray than pressure sprayers can deliver. But the tiny vibrating elements can be pricey, as are the aluminum or titanium horns used to amplify them. And they cannot be used with colloidal liquids, as the vibration causes the solid particles to clump and fall out of solution.

If you want to produce an aspirable mist, but don’t need superfine control over particle size or flow rate, you can use thermal vaporization. This involves either pushing fluid through a narrow, heated canula, or heating a coil in contact with a tank or porous material wetted with the liquid to be vaporized. Thermal vaporization is useful when you need a simple, less expensive system. E-cigarettes use the coil method, which is perfect for such a small, portable device.

Electrostatic atomizers force an insulating fluid through an electric field. The fluid molecules pick up a charge and repel each other while sticking to any object at a lower electric potential. This method was often used in the mid-20th century to spray metal car parts. When the charged paint particles hit the part, they dispersed and covered the surface uniformly—including surfaces not in the sprayer’s line-of-site.

In order to make sure the charged particles stick to the intended target (and not to the floor, walls, or person operating the spray gun), the sprayer is connected to the object with a wire that completes the circuit, allowing the charge to flow back to the gun after the paint hits the object. 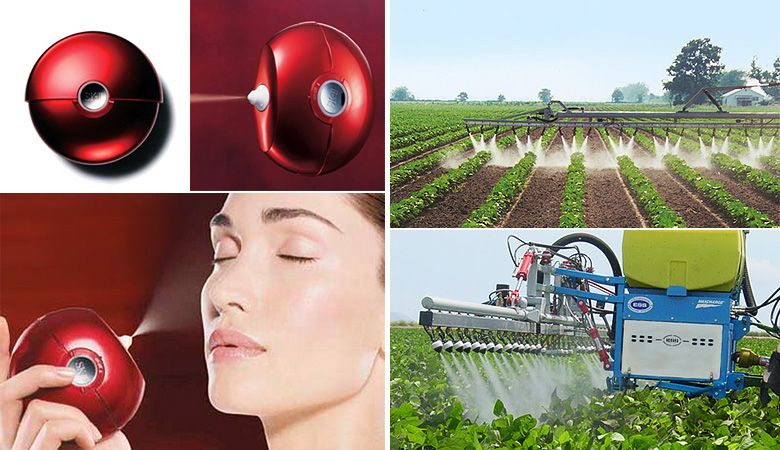 Products that use this technology include cosmetics brand SK-II’s makeup applicator, the SK-II Air Touch, and Electrostatic Spraying Systems’s MaxCharge agricultural sprayer. The applicators can be held by the users or attached to field equipment. The Air Touch is designed to produce zero overspray on nearby objects, while the MaxCharge’s appeal is that it completely covers the plants (which are, naturally, grounded.)

We have also designed triode-based electrostatic atomizers for clients. In a triode system, a fluid, powder, or aerosol is forced between two elements, one at a very high potential and the other grounded. The electric field between the two is very dense, and the particles become highly charged, creating a finer, more homogeneous spray than a diode-based system. Triode-based systems require less power than diodes. They need an antenna to ‘communicate with the environment’ and pick up excess charge if the ground element is not directly connected to the object being sprayed. Disadvantages of triodes include tight tolerances that require precision manufacturing and assembly, and even more of a tendency than diodes to spray unintended objects if the spray gun isn’t electrically connected to the target.

Electrostatic atomization of both types works well for insulating liquids, but obviously not for conductive stuff like saline solution, which would short it out. Zap!

We’ve developed products using all of these techniques so we know electrostatic and ultrasonic atomization can deliver superior results, but keep in mind the cleverest design is not always the most appropriate. Sometimes your client wants a ray gun; other times, a better spray bottle is the best solution. Anything that incorporates batteries, power, electronics, etc. is going to involve safety issues, compliance, and regulations. As long as you keep size, complexity, material to be sprayed, manufacturing constraints, and cost in mind, you’ll be covered.