In product development, we’ve all heard or used the phrase “smoke and mirrors” when referring to prototyping. I’ve always known what it means, but I’m a little embarrassed to say I never knew the origin of the phrase until recently. It refers to the technique magicians use to distract an audience with a burst of smoke, and then make things seem to appear or disappear with the clever use of mirrors. Go figure.

This phrase has a negative connotation—essentially it means being fraudulent or deceptive. And despite its frequent use in regard to mocking up an idea (i.e. prototyping), I don’t think it applies.

At Bresslergroup, clients often commission us to rapidly (magically!) develop sophisticated prototypes as part of the product development process. Clients use these prototypes in a variety of ways: at trade shows to generate buzz; for gathering customer feedback; and most frequently, to conduct user research (often in the form of usability testing). For medical products, human factors research may be a requirement—or at least a recommendation by the FDA.

Ideally, prototyping should occur as early as possible to be leveraged for user research so the design can be positively iterated with hard data from that research. But product development is often a long road. Depending on the core technology involved, it can take a year or more before a production-grade prototype is ready to put into the hands of its intended users. Luckily, you don’t always need a production-grade model for effective user research. 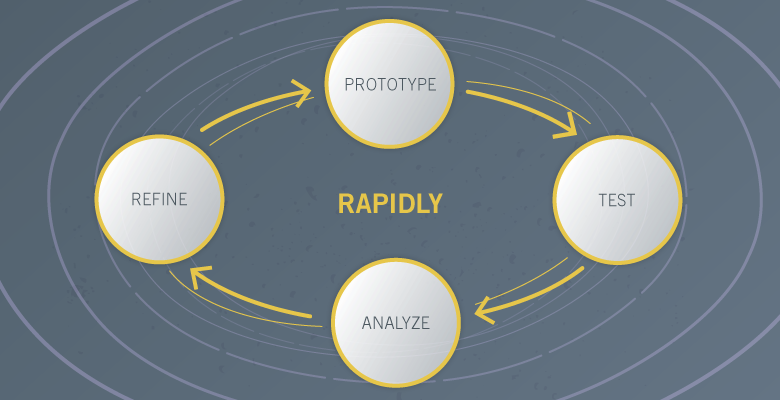 A boiler-plate process for prototyping rapidly for user research.

How To Prototype Rapidly

It’s becoming an all-encompassing term. Generally, it means quickly and cost-effectively building a realistic model of a product—whether digital or physical—in order to evaluate and test it.

When it comes to prototyping for the purposes of user research, how to build is determined by what you’re building.

For user research, the fidelity or level of sophistication of a prototype is largely based on testing requirements: What’s important to the product’s users? What do users need to be able to do well? Should the device help reduce user error? Should it help to mitigate risk? If it’s a medical product, are there specific features the FDA might recommend to test? We often work with our clients to build a prioritized feature list. 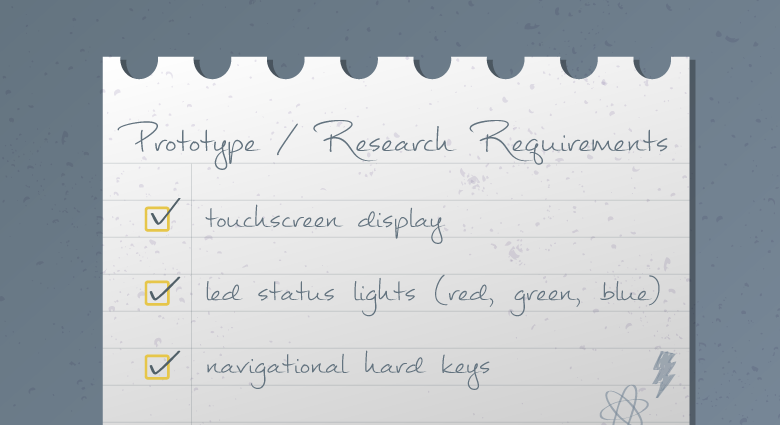 We narrow down the requirements to the most critical. For example, it’s probably important for a user to be able to clearly identify and understand status information that is somehow visually communicated by a device. Perhaps it’s also critical that the user be able to accurately perform touchscreen data entry. Maybe you’d also like to test if certain functions are more appropriate as hard keys instead of touchscreen keys. More than likely these types of features are critical to a product’s usability. And by defining these features, we can determine which hardware and software to use.

The “smoke and mirrors” metaphor becomes applicable when talking about the guts of your prototype. Suppose you’re prototyping a device that can accept a sample of organic material and run some kind of analysis on that organic material (like our very own HazMatID Elite). The technology inside the device that conducts the analysis is not important to the user research. What’s important is how easy or difficult it is to interact with the device—in this case, while wearing a HazMat suit—while the analysis is occurring. We can simulate that.

The HazMat analysis technology is something that would be prototyped and tested by electrical or chemical engineers in a lab—and is more than likely the most time-intensive aspect of the product’s development. The interface (both physical and digital) is something we can prototype and user-test by thoughtfully utilizing off-the-shelf components.

There are a lot of prototyping resources out there, and there is no one-size-fits-all solution. Because, again, the fidelity of your prototype depends on the scope of what you’re testing, and perhaps even the sophistication of your users. It may be sufficient to put an interactive wireframe in front of your users if: a) you can get your users to not take the wireframe too literally; and b) all you are testing is a digital user interface.

If your prototype requires the aforementioned features of lights, hard keys, and a realistic touch-screen display, you might need something just a little more magical—such as microcontrollers that can interface with these components. 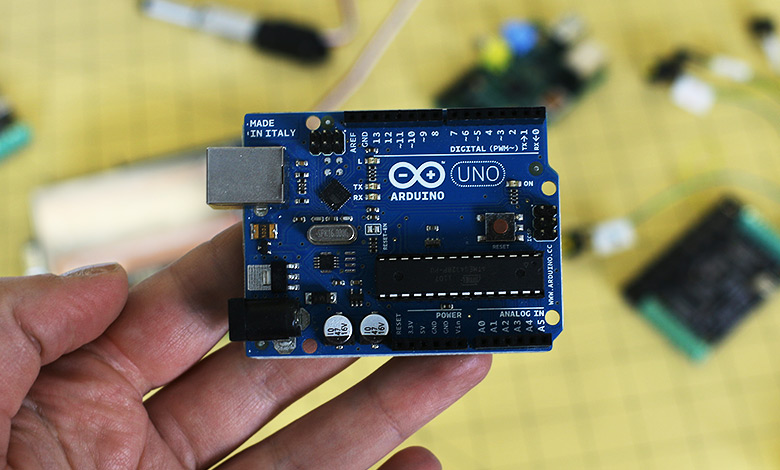 Microcontrollers such as Arduino are quick, off-the-shelf tools that enable us to co-prototype the digital and the physical.

As more prototyping technology emerges, and as the field of interaction design evolves, we’re more frequently challenged to develop prototypes that can realistically simulate both the physical and digital user experience. Which is great, because we can add more realism to our user research to achieve better results.

Our rapid prototypes are required to facilitate software-to-hardware communication—and vice versa. Hitting a touchscreen button (software) might engage a small motor (hardware); the system should be able to monitor the status of that motor, and send that status information back to the display. You get the point.

So how do we choose which tools to use? Well, there’s a laundry list of technical and practical questions you need to ask yourself. This isn’t an exhaustive list, but some key questions are:

Once you’ve answered these questions, you may find that you have a lot of options or you are severely limited. You may have to make sacrifices on what you can actually test or perhaps the fidelity of a specific component. However, there’s still a pretty good chance you can come up with a viable prototyping solution appropriate for a robust user study. This is your chance to get creative and become a prototyping magician.