Wearable sensor technology was a key advantage for U.S. Olympians in the 2016 games. The ability to precisely measure an athlete’s velocity, acceleration, angle of movement, heart rate, respiration, and temperature allowed U.S. Olympic contenders from shot put to swimming analyze every detail of their training and nutrition. And led to some pretty impressive wins.

Sports tech for training and therapy have gotten even better this year. A big contributor to that is the auto industry’s relentless push toward safer, more autonomous vehicles — specifically, the increasing sophistication, diversity, and affordability of the sensors those cars need to operate.

That sophistication has rippled outward into many areas, including into the world of sports, where the U.S. Olympic Committee snaps up promising technology with exclusive use agreements that last a couple of years — long enough to gain an edge over the competition at the next Olympic games. Here, we look at a few sensor technology trends that maximized performances in Rio in 2016, and make some educated guesses at what might have helped this year’s champions in PyeongChang.

Radar was developed by the military to use radio waves to detect moving objects. Cars now use radar for exactly the same purpose, although it’s intended primarily to avoid collisions rather than invasions. And the Olympic track team? They use it to detect shot puts. 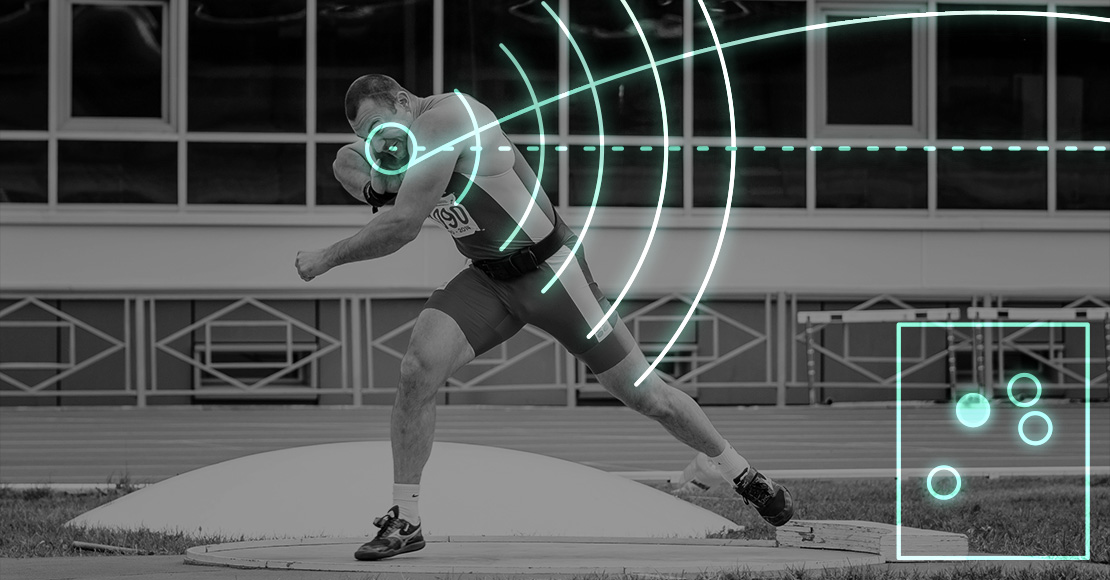 That’s right. The U.S. track team dominated the Rio Olympics with 32 medals. We don’t know all their secrets, but we do know the shot put team had been training with a device that paired radar with video to help them optimize velocity, takeoff height, and distance. 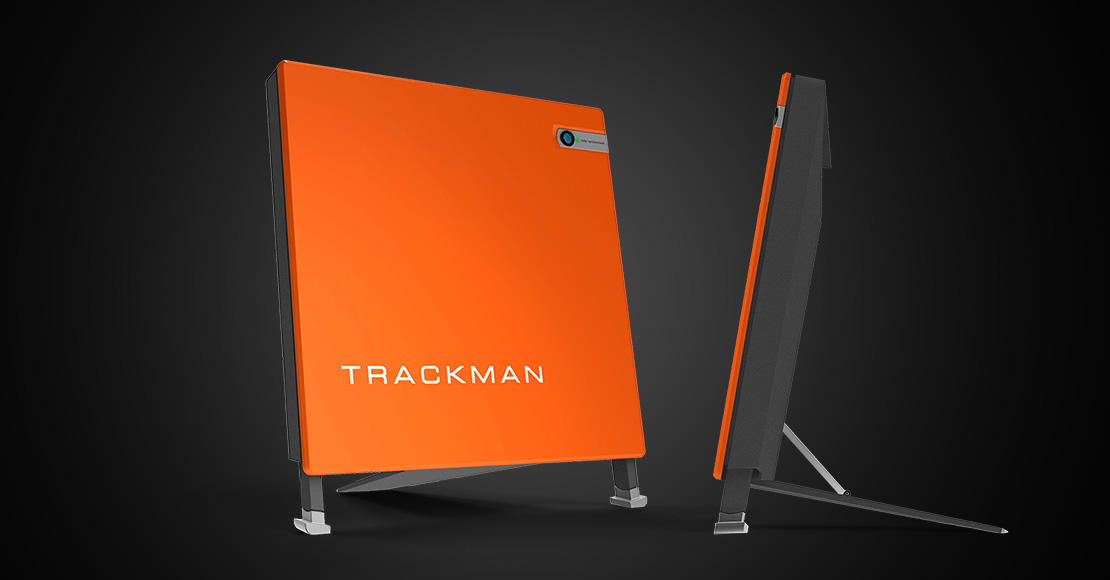 The device might have been the Trackman (pictured above), which is primarily marketed to golfers but claims to have been used by shot put champion, Joe Kovacs. U.S. shot putters Ryan Crouser and Kovacs won the gold and silver medals respectively in Rio, with throws just centimeters away from the world record.

Infrared cameras can pick out warm, moving objects — such as people — with higher accuracy than any other spectrum, which makes them useful for autonomous cars driving in messy, visually complicated conditions. The infrared spectrum can’t be seen by humans, but that’s actually an advantage — for training biathletes. 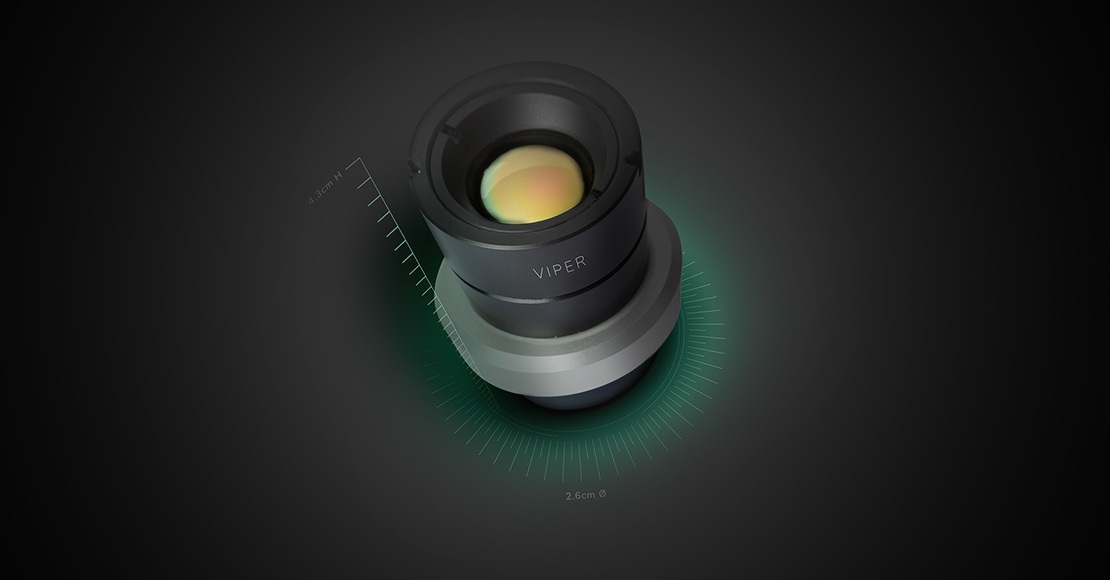 Not only do biathletes cross country ski ten to twenty kilometers at high speed lugging a rifle, they have to stop every few laps and shoot. If they miss any of the five tiny targets fifty meters away, they do a penalty lap. For each. So accuracy is of paramount importance. (Even as we write this, the men’s world champion lost miserably to some unknowns in the 10km biathlon in PyeongChang because he missed a few targets.) 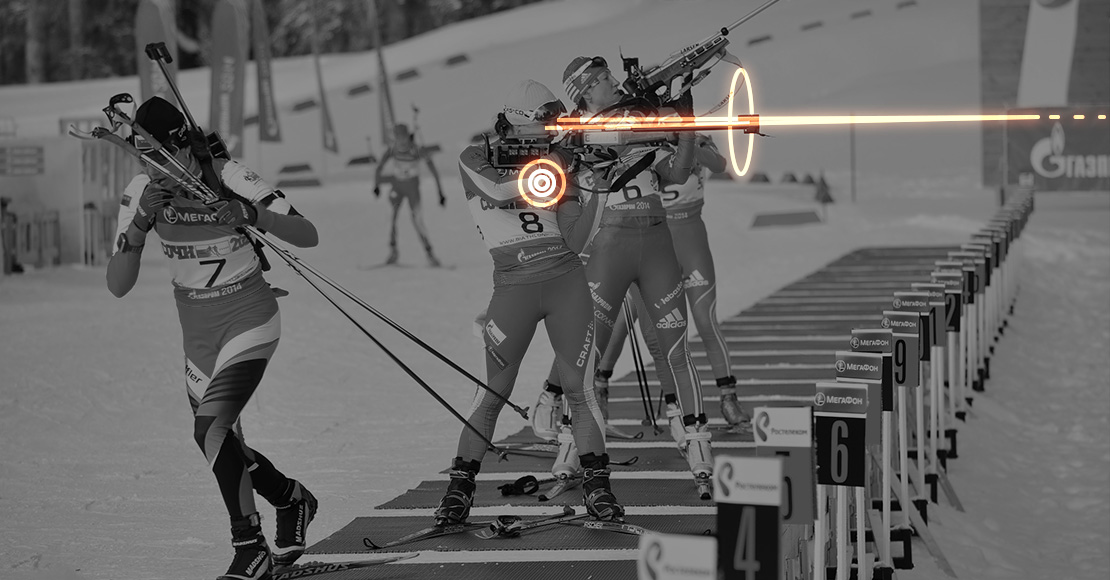 According to the December, 1997 issue of Photonics Spectra, the U.S. Olympic coach was having biathletes attach infrared lasers to their rifle sights. He used an infrared camera to see the spot made by the laser, so he could tell how good their aim was, and then combined that information with camera footage and a heart sensor to assess their overall performance.

This was more than twenty years ago. The original laser and sensor device was too fragile and expensive to actually ski with back then. We haven’t seen anything public about this, but we bet they’re skiing with them now.

The auto industry has gotten really good at the holographic display for projecting maps, navigation instructions, and hazard warnings on the windshield for those occasional times when a driver actually has to take the wheel. 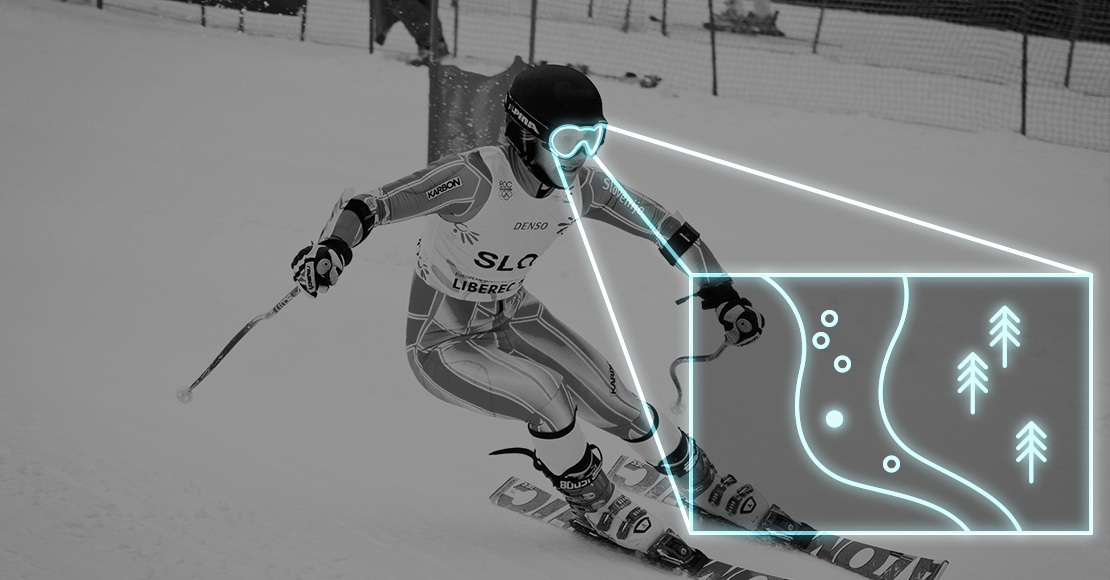 Skiers such as Laurenne Ross and Lindsey Vohn are using the same holographic technology in goggles both to train and for therapy after a crash. While training for these Winter Olympics, they ‘skied’ the same course over and over on a pair of balance boards that mimicked the feel of skis while wearing virtual reality goggles that simulated the course they’d be skiing in PyeongChang.

The Olympic rehab regimen also entails adding strobe lighting to goggles to encourage the skier’s brain to rewire its connections to an injured body part from the safety of the gym.

Sensor Fusion To Give Figure Skaters Every Possible Edge

Individual sensor technologies are pretty impressive already, but what really sets sports tech wearables apart in 2018 is sensor integration. As an example, let’s imagine you’re a coach training a figure skater who’s having trouble landing a quadruple lutz. First, you outfit her with some accelerometers and gyroscopes strategically placed on on her limbs.

You can buy the tiny accelerometer/gyroscope combo already packaged onto a chip that captures data from all the axes simultaneously and integrates it to tell you exactly how much force she’s exerting in each limb as she jumps, lifts off the ice, spins, and lands.

But you need some way to record that data, and match up the time stamps from each package. You could have the packages broadcast the info in real time to a rinkside computer. But that gets tricky, because the skater’s bones can block transmission — especially a problem if your skater is spinning, which she is during a jump! 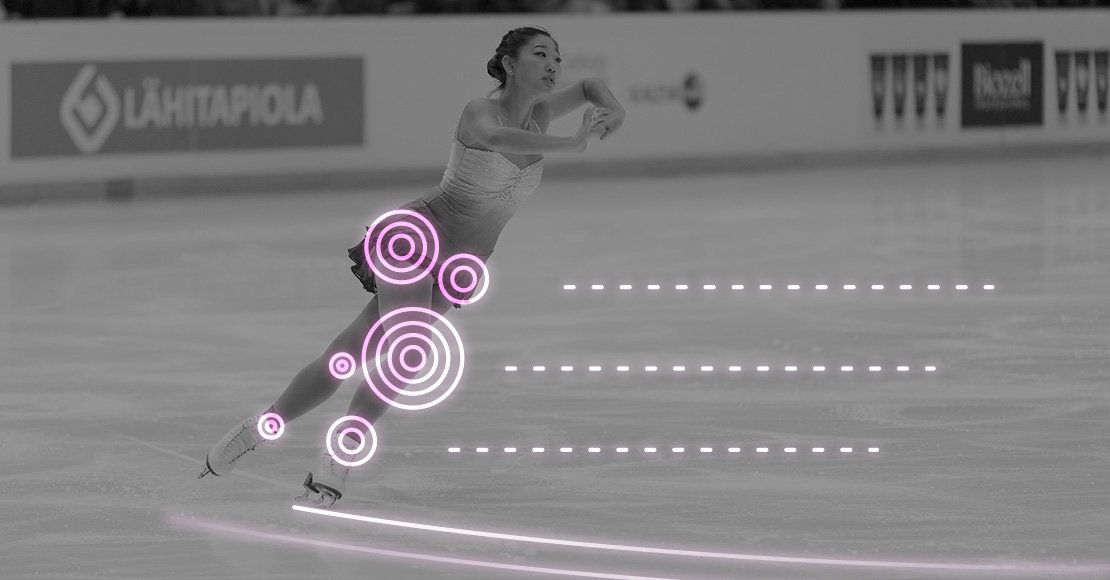 Bluetooth would be power efficient but it won’t work over the distance of an entire skating rink, so you’ll probably need to use WiFi. But WiFi is power hungry and your athlete doesn’t want anything extra, like a battery, weighing her down. So maybe you won’t have the devices broadcast in real time.

Instead you’ll have the accelerometer/gyroscopes record their data while she’s moving, then upload it to a phone or computer when she’s done with the jump. Now, you could have the devices use dead reckoning to judge the position of her limbs, but that can get more and more inaccurate the longer she’s moving on the ice. So you’ll use a video camera instead, with 3D imaging cameras and perhaps some LIDAR (like radar but using light) to judge her time of flight.

Once the devices sync their start times and upload their data, an intelligent kinematics app can convert your athlete’s video into a stick figure labeled with the forces, accelerations and velocities, and compare her to a competitor who does this move perfectly (Unfortunately Brandon Mroz retired a little early to have this kind of data recorded.)

If she’s wearing a shirt with a heart rate, temperature, and respiration monitor, you can also map her energy in/out during a day and match her food and fluid intake to her weight maintenance, and figure out how to improve her conditioning the fastest. This is exactly how U.S. Olympic Figure Skating coaches have groomed this year’s athletes for the games. We’ll see how it pays off.

Although cell phones are responsible for the tiny MEMS accelerometers and gyroscopes on the market that cost 30 cents a piece and work beautifully, fusing them with 3D camera and time-of-flight LIDAR is possible because of autonomous vehicle development.

Now that we know how it works, we can also see where the opportunities lie. We’ve seen major sports players like Adidas and Nike leave the field and close up their wearables divisions, deferring to tech companies like Apple and Samsung, and to some degree there’s a little bit of consumer boredom with general fitness trackers. How long can you be entranced by the number of steps you take each day? 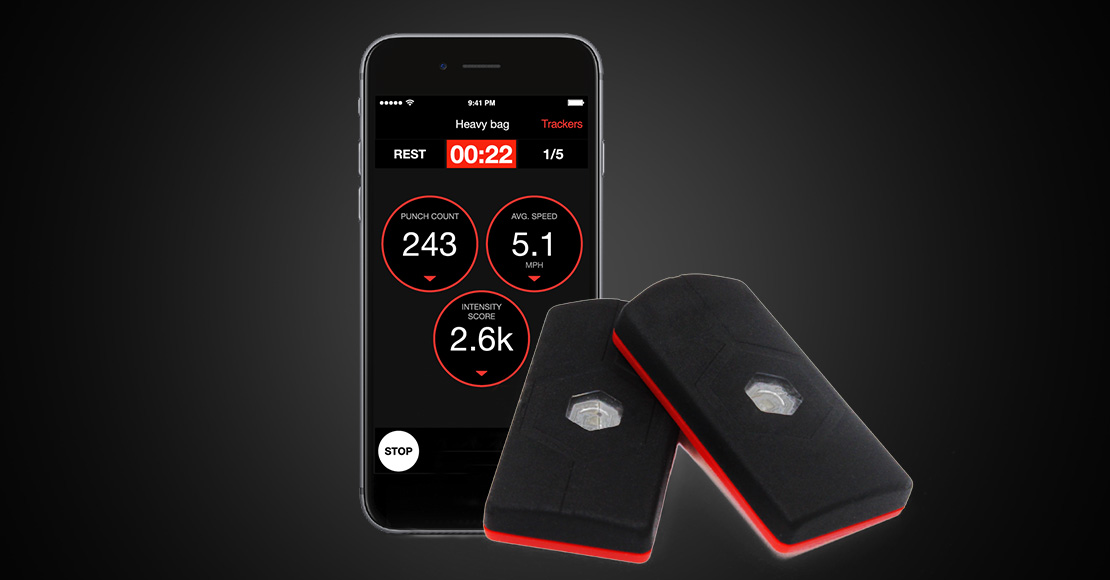 But there are holes in the market for devices that solve the unique challenges of specific sports, like the Hykso punch tracker (pictured above) for boxing, or Trace for extreme sports in extreme environments. Trace was designed to be nearly indestructible, easy to use, and record its own data until it’s close enough to a Bluetooth device to upload to the cloud.

We are seeing an increasing number of applications for specific sports and instrumentation. We predict that much of it will involve sensor fusion. Keep watching the auto industry for innovations that could make new devices possible — the infrared cameras, for example, are just starting to come out now, and prices should come down.

The figure skating rig is a good example of the level of sophistication that can be achieved with recent sensor fusion advances. In the future, we can see a lot of opportunity for fusing heart rate and blood gas sensors with movement analysis to provide personalized training suggestions in specific sports. The big players won’t delve into the specialized arenas alone. They will look to partner with smaller companies, and that could be another way to get in and dominate a niche.

Tech has always been a part of the sports world but now it’s much more accessible; there are more players in the field and more people investing money and time into developing it.

Wearable sensors will continue to change the way not just elite, but everyday, athletes train. Having more metrics will help people train with more precision. They’ll be looking not just for top level numbers, but for all the intermediary data that allow you to help tune yourself. And as sensor technology becomes ubiquitous, it’s going to change things for top level professional athletes as they try to squeeze every last bit of performance out of themselves.

The influence of the auto industry on the world of sports is an unexpected parallel. We wonder — what will these sports look like when that first Level 5 autonomous vehicle hits the road, completely sans driver? Maybe we should buy tickets to the next Olympics. … See you in Tokyo in 2020.