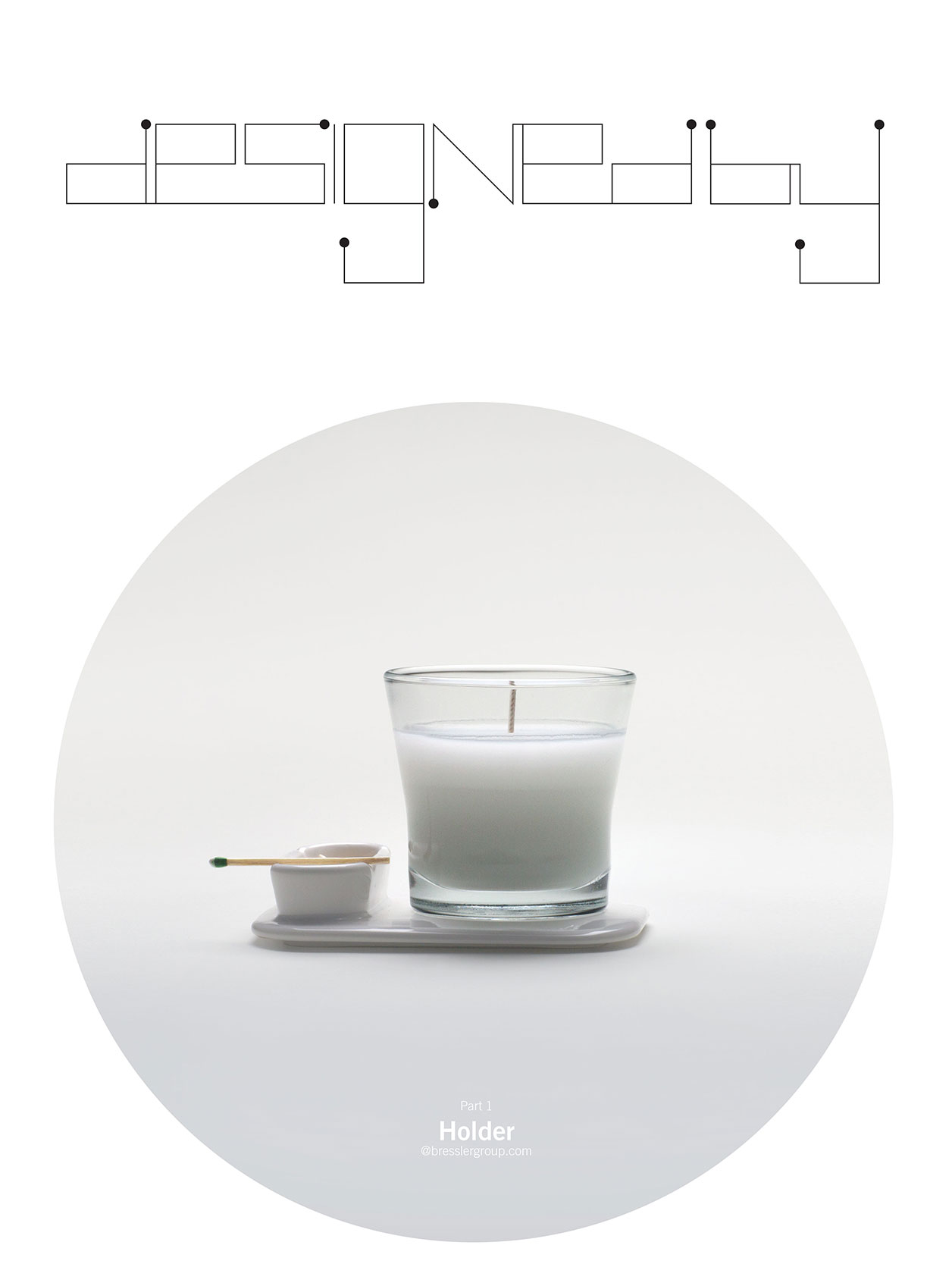 Everyone designs. My cousin has a habit of storing his matches in his bathroom candle when he’s not using them. Its a logical idea because it puts them in a very convenient location. He never has to dig around for matches. When he needs them, they’re there. When company comes over, the matches are easily discovered.  My cousin designed this solution, and I took it upon myself to refine it.

Design by, Refined by 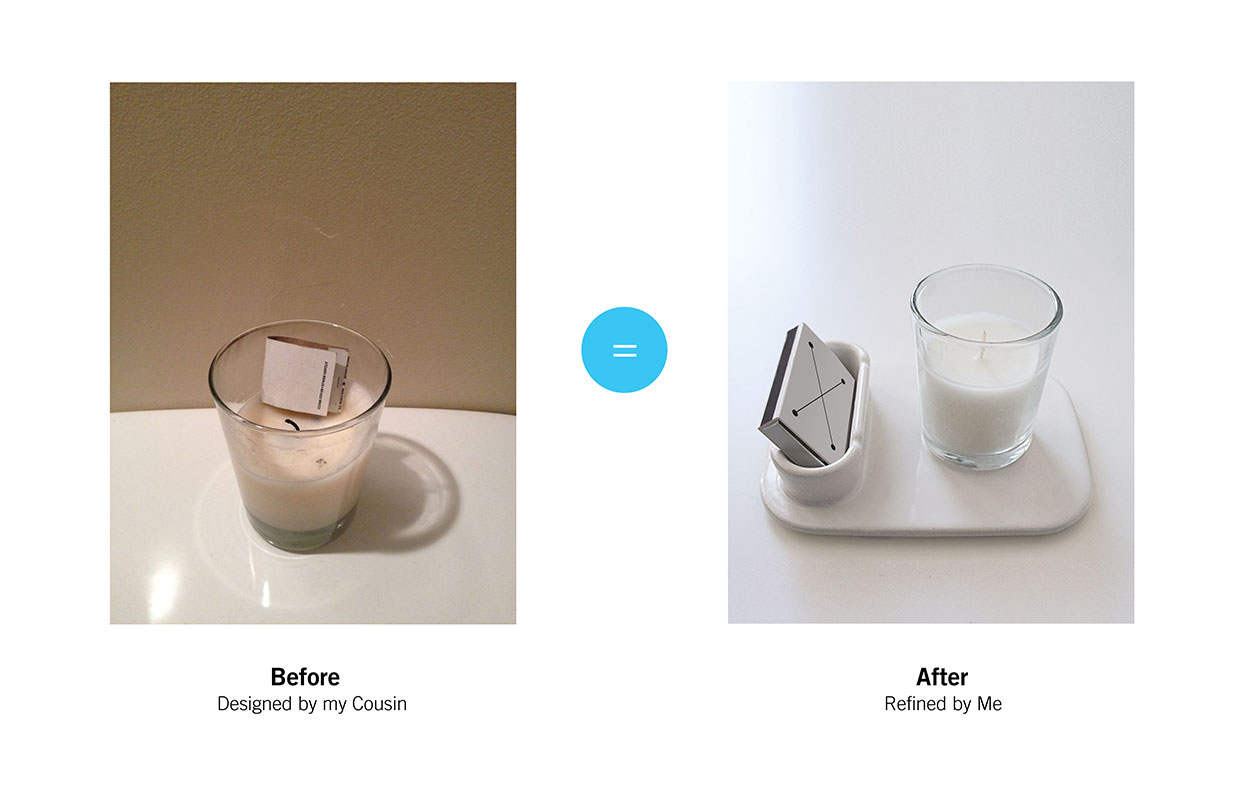 Affordance is a universal design principle describing elements whose functionality is reflected in their form. A cup handle affords the grasping of a cup. A knob affords twisting; a cord affords pulling. In this instance my cousin was using the unlit candle as a cup that affords storage.

Japanese designer Naoto Fukasawa abides by a philosophy of designing objects and tools that afford people’s natural behavior rather than interfering with it. Observing natural behavior is part of his design process.

“Holder” is the first installment in Designed By, an ongoing project based on design through observation, and inspired by Fukasawa and the idea of affordance. My intent is to eventually create a collection of multiples around this concept.

It is also a challenge to myself to spend more time observing people’s behaviors, particularly how they interact with objects. It is an experiment in spotting clever solutions that were designed by regular people (i.e., non-designers). 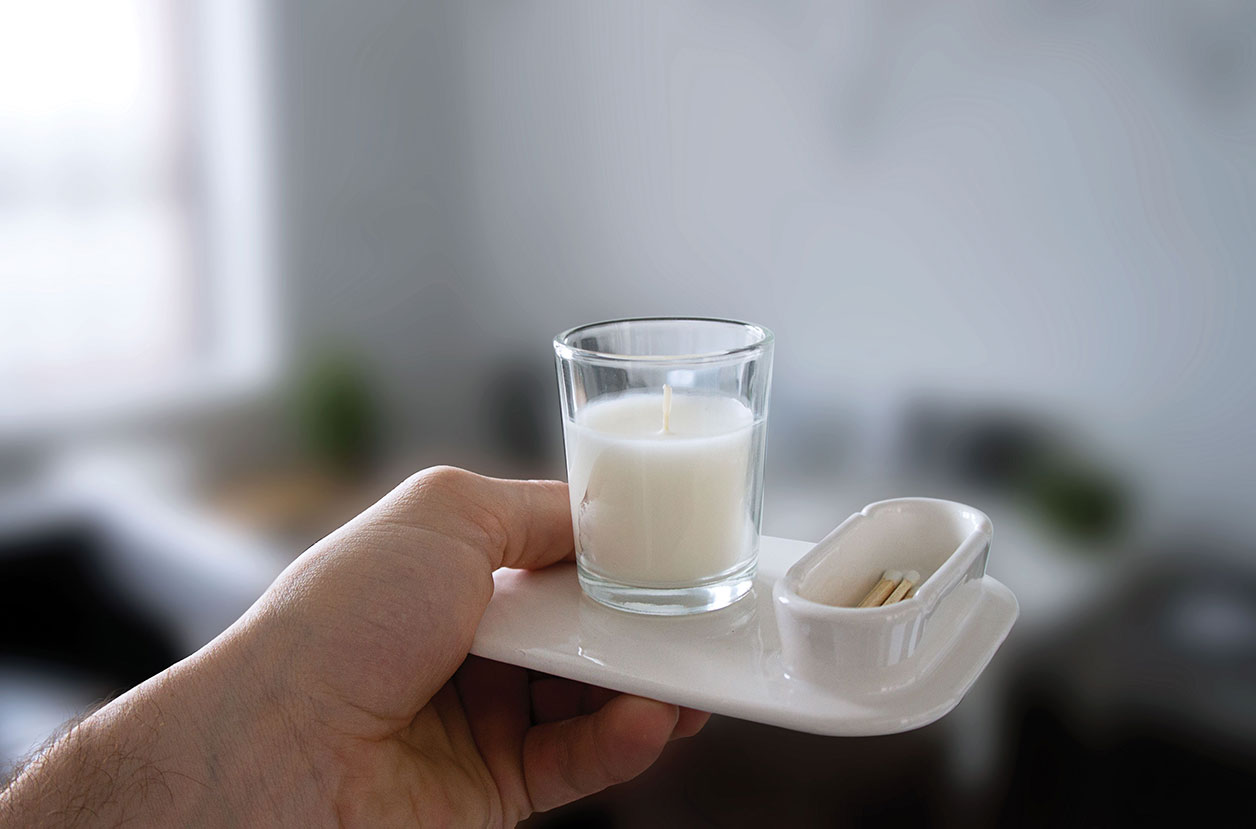 Faced with the choice of redesigning the candle with integrated storage or making the leap to a candleholder, I decided the former was an inefficient use of space. A candle shouldn’t compromise its functionality by holding matches. And designing a holder to support both the candle and matches is more usable.

My goals were to keep the idea straightforward and to maintain the integrity of the original design solution. I designed a simple cup as part of the holder to maintain my cousin’s idea of using a cup as storage. 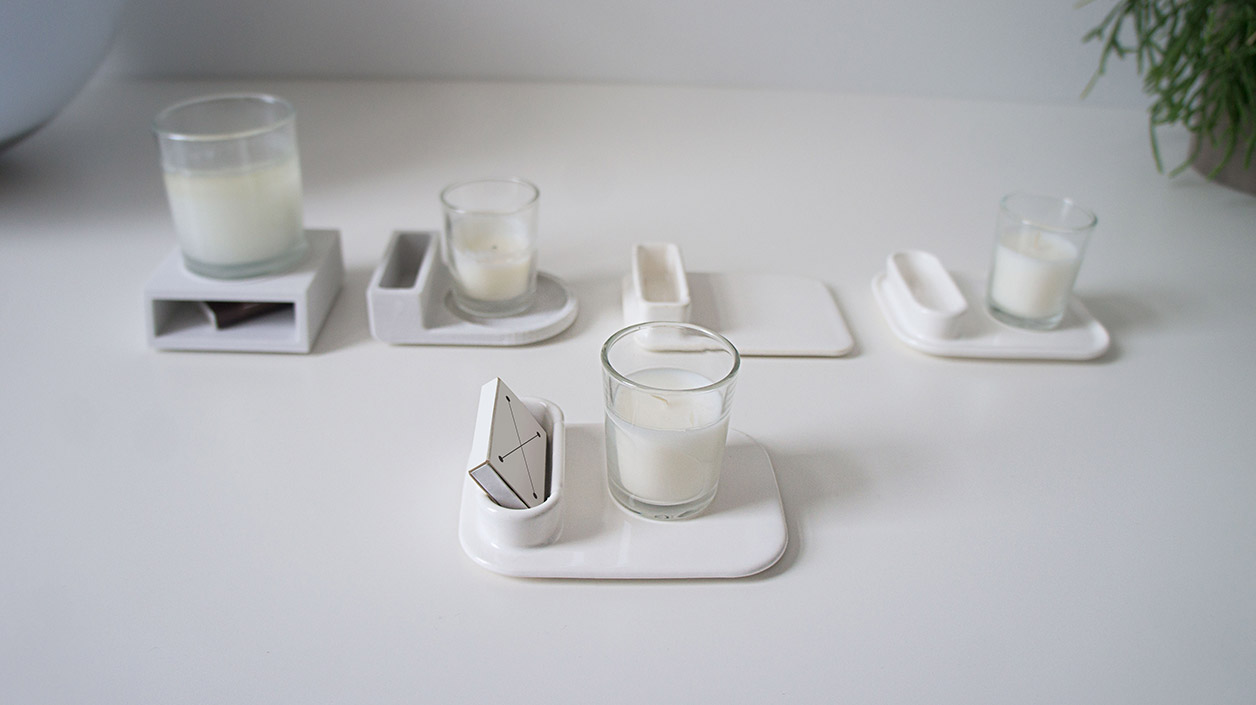 I calculated dimensions by measuring a wide range of candles and matchboxes/matchbooks to determine a middle ground. 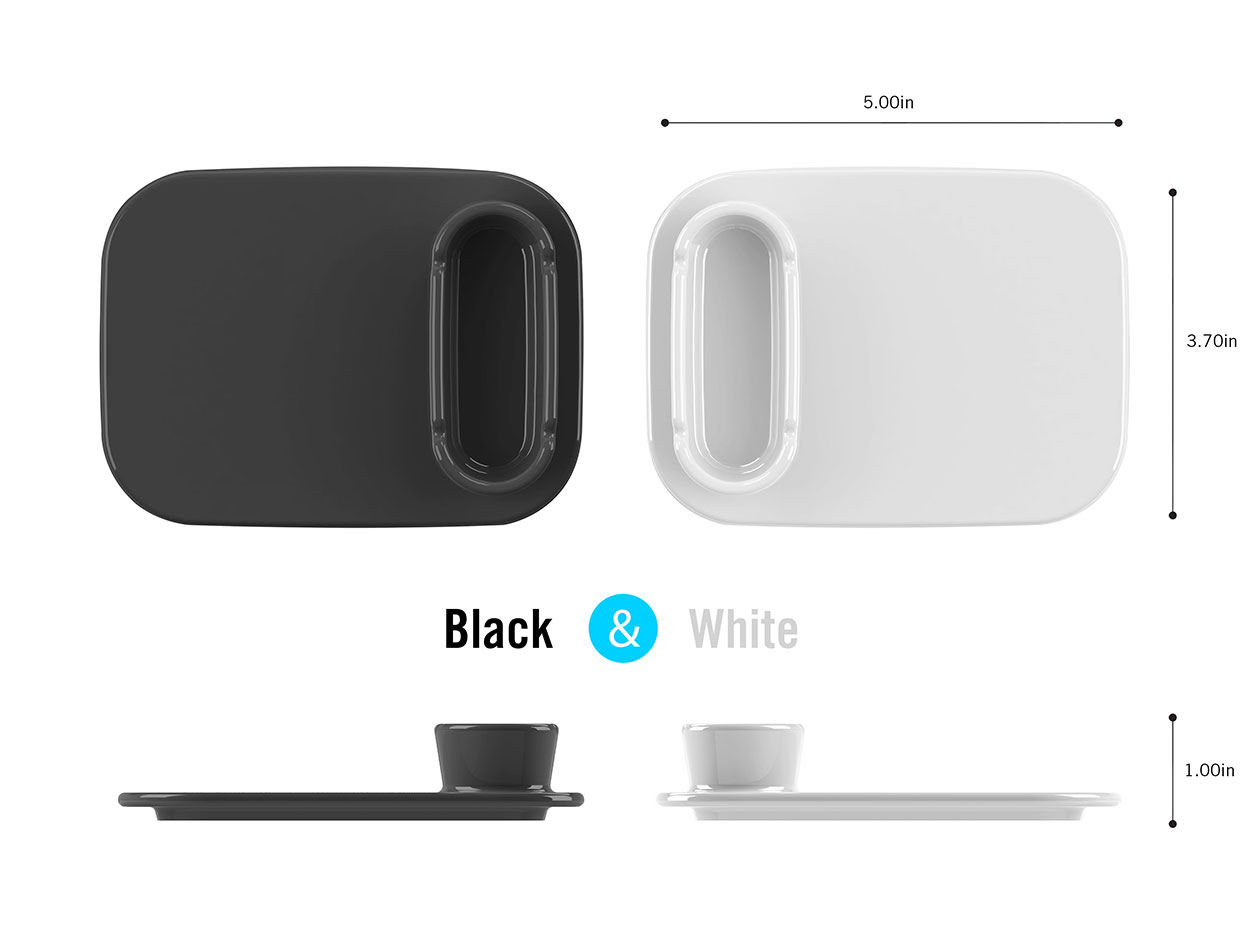 Since deciding on dimensions, I’ve experimented with scaling the form. Its simple aesthetic and simple functionality make it a blank slate — a little bit bigger and it can function, as shown below, as a chip and dip, sponge holder/soap dish, sushi holder/soy sauce dish, or tea cup holder/tea bag dish. Simplicity affords versatility. 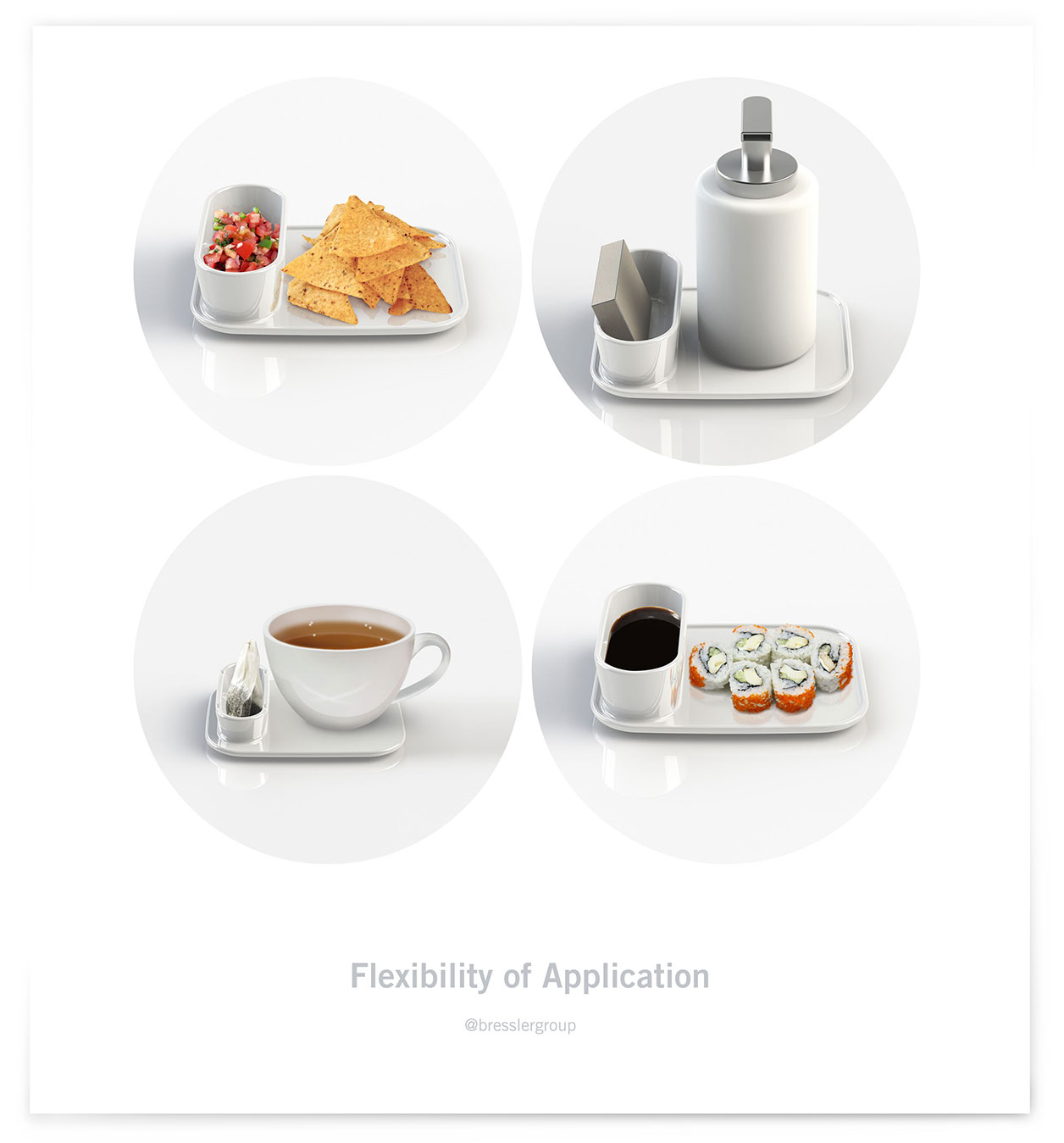 While designing I also considered how a match can act as a weapon or a dangerous object, and I wanted to treat it as such.  Throughout history dangerous objects such as swords and guns have always been displayed on racks.  The ritual of placing a gun or sword on a rack is one of respect.

I designed four indentations in the top of the match holder, two in front and two in back, for resting a lit or unlit match.  The match is presented to the user like an offering, sending the message to respect it. This also increases the holder’s usability by giving people a place to rest a match that is not yet cool enough to toss in the trash. 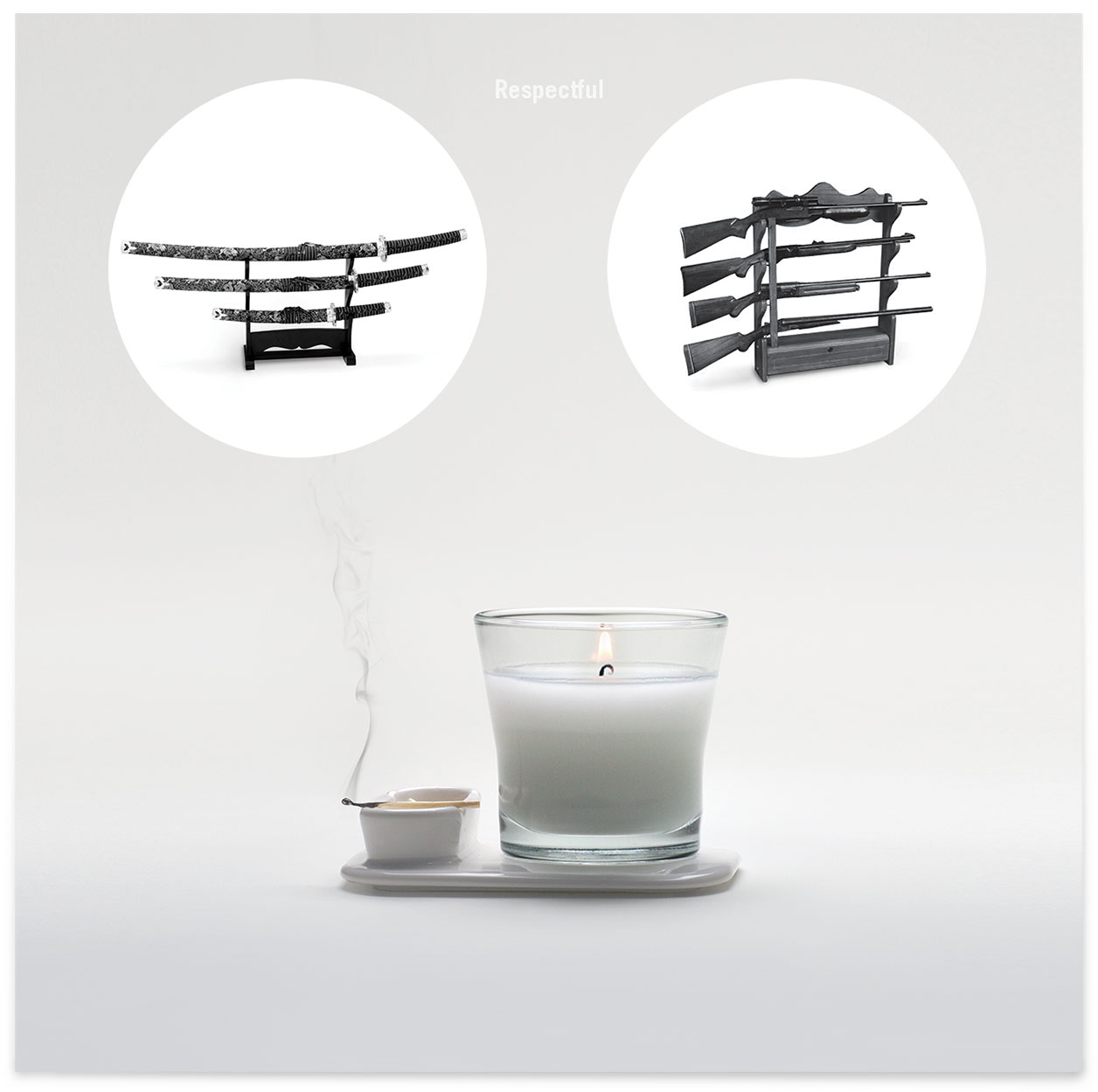 I printed some of the prototypes here at Bresslergroup, but most were outsourced to Shapeways, the New York-based company that lets anyone design and order an object printed on one of its high-end 3D printers. The pieces pictured in this post cost me about twenty-five dollars each to print, which is pretty cheap and accessible for most. 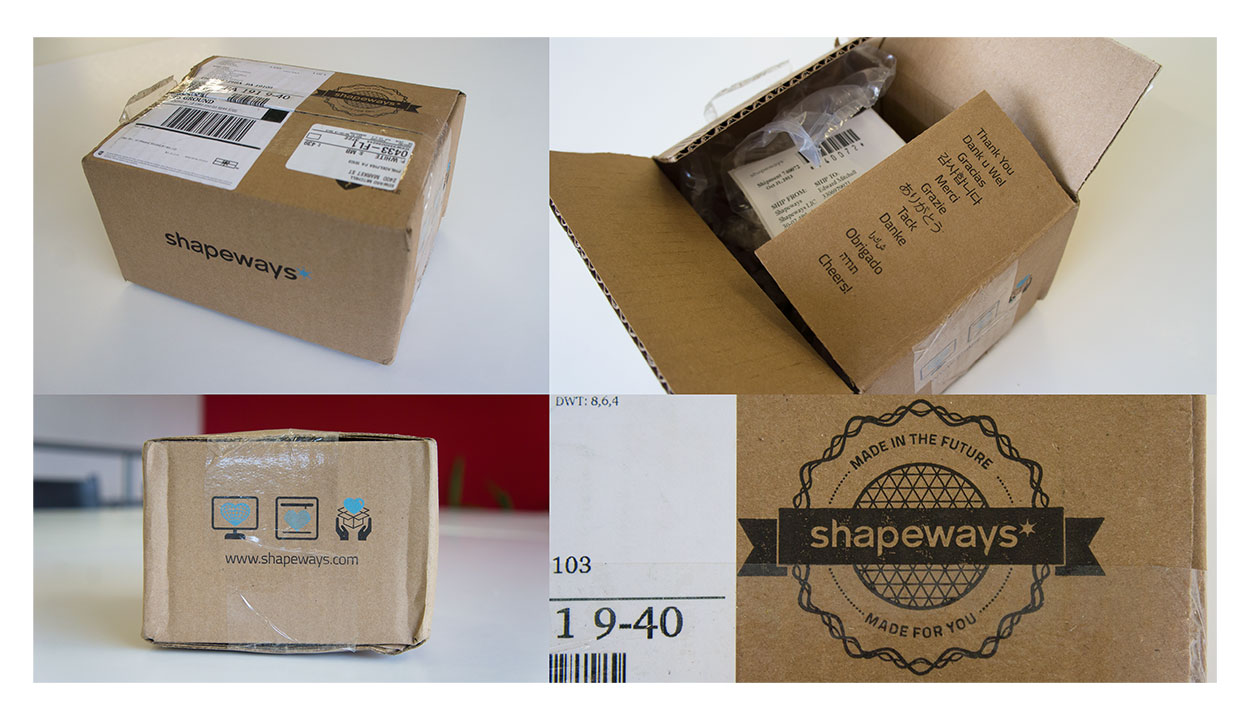 Shapeways’ site is intuitive. It walked me through the material options and gave good specs on how to prep my models. After I delivered a basic, condensed CAD file, there was a three-week turnaround for ceramic pieces. The color range for ceramics is somewhat limited and some of the pieces arrived with small imperfections. (I never contacted customer service about the imperfections, so I can’t comment on how they’d respond to this.) Overall, though, I was impressed by the experience. Shapeways corrects for any shrinkage that might occur during the printing and heating process — the dimensions are very accurate and the quality of the material is good. Also, their packaging — basic cardboard boxes that are simple but well-branded with thoughtful touches, like “Thank You” printed in thirteen languages on an inside flap. 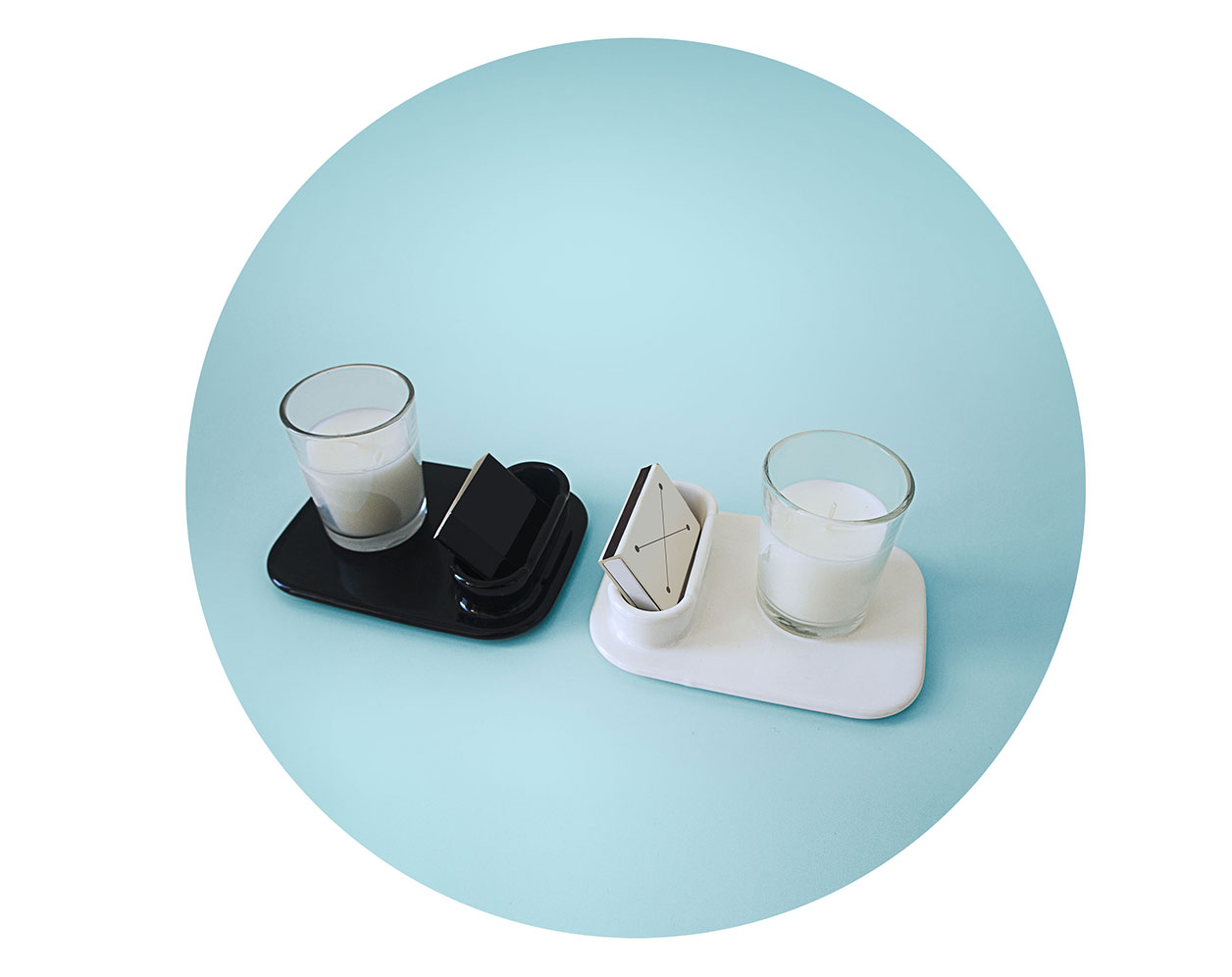 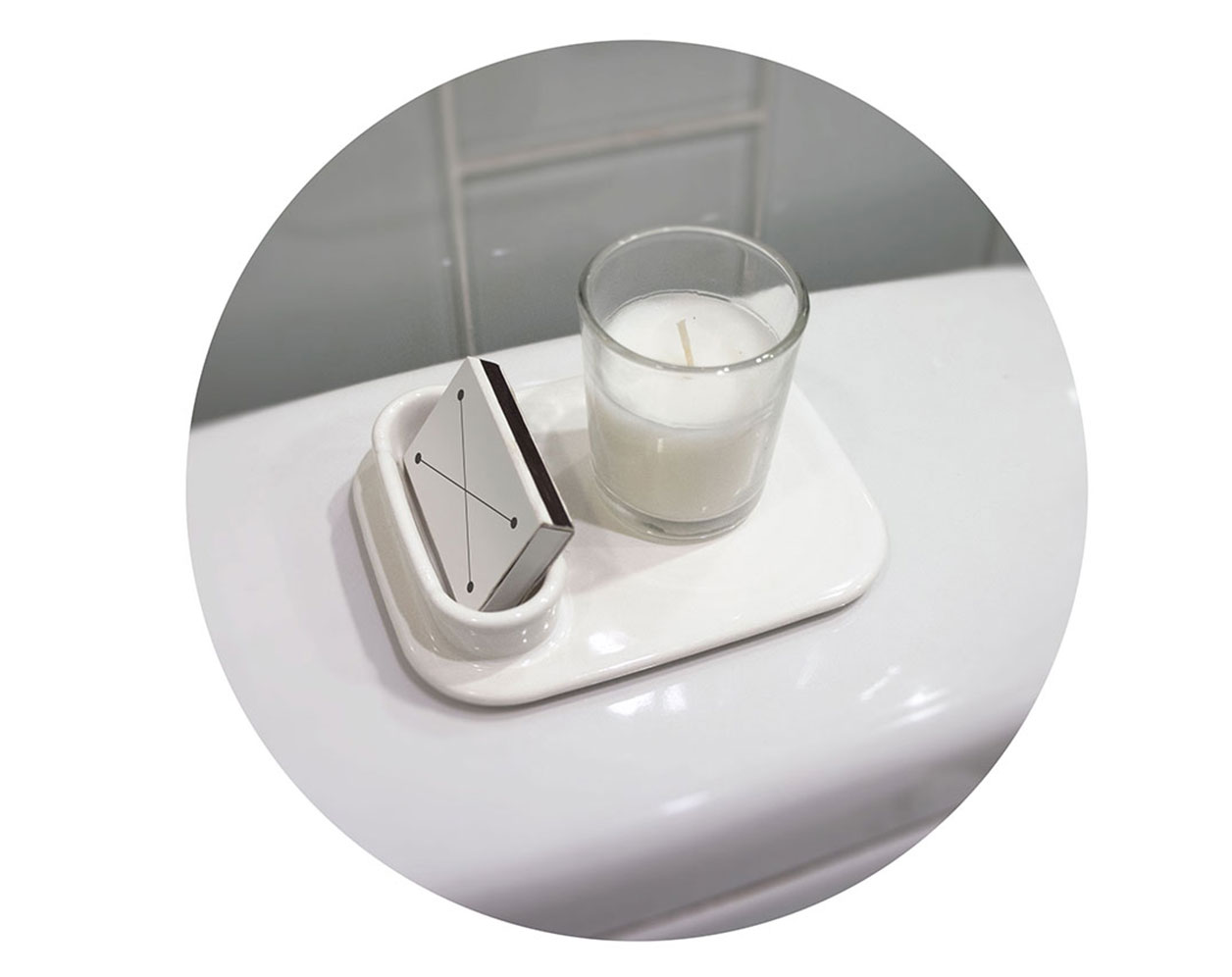 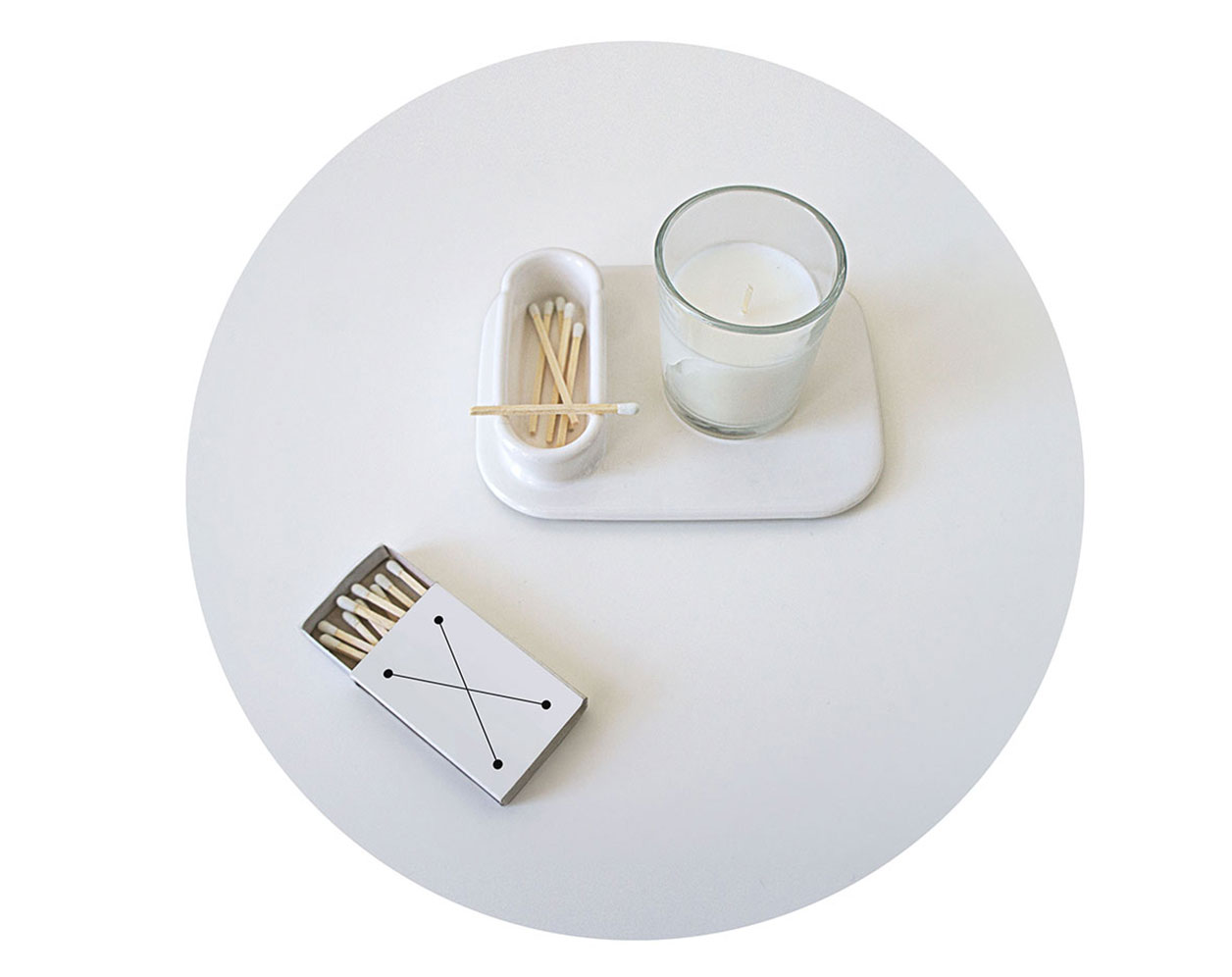 I soon realized this project was really an exercise in paying attention to my surroundings. Once you become aware of these “designed by” instances, you begin to notice them everywhere. Look around — what have you designed? What “unofficial” solutions have you noticed at home, at work, during your commute, over the weekend? How would you refine them?