We started thinking about the Philadelphia city flag while I was working on United We Stand, a side project where I redesigned every state flag. That project was sparked by an exploration of flag design and my disillusionment with our divided nation. I came up with a cohesive design for the country’s state flags that doubles as a visual petition for a more unified country.

United We Stand got me and my colleagues at Bresslergroup thinking about the Philadelphia city flag. Is it a good flag design, according to the principles of the International Federation of Vexillological Association (FIAV)? Does it represent our city well? It turned out none of us knew what it looked like. When we saw it, we didn’t hate it but we were intrigued by the possibility of an update. The flag dates back to 1874, and Philadelphia has changed a lot since then. It seemed like the perfect undertaking for DesignPhiladelphia.

The Philadelphia city flag is a blue-yellow-blue triband to denote the original Swedish settlers. The city’s coat of arms hovers in the yellow strip — its elements include the scales of justice; a seal with a plough and a ship in full sail; two women holding a cornucopia and a scroll; and the motto, “Philadelphia Maneto” or “Let Brotherly Love Continue.”

Our intent was to keep the design simple with no more than three colors, meaningful symbolism, and as little text as possible. All these ideas align with the official rules of good flag design and were important for us to consider.

Most of the company showed up to our first brainstorming session, during which we thought about DesignPhiladelphia’s theme of “experience design” and asked ourselves, “What is our experience of Philadelphia and how would we translate elements of it into a flag?” Our staff, an even mix of Philadelphia natives and transplants, came up with a wide-ranging list of words, including:

We also dug up some random facts, like this one from Wikipedia: “The average Philadelphian today consumes about twelve times as many pretzels as the national average.” Hmmm.

A few of us went back to our desks, inspired to come up with flag designs based on the brainstorming session about how we experience Philadelphia. We came up with a lot of different ideas, including:

• The Comcast Tower and Liberty One and Two in the moonlight. (When industrial design intern Rizki Tarisa first moved here from Singapore, the Liberties were his “lighthouses.”)
• A modernized city seal that swaps out old symbols with contemporary ones, e.g. the cornucopia with a Trader Joe’s bag and the scroll with an iPad. (Rizki, again)
• A flag of tiles, each representing a different neighborhood (engineering intern, Molly Dee)
• A hybrid Liberty Bell and keystone (industrial designer, Tom Murray)
• A slot machine, showing three Liberty Bells (industrial designer, Chris Murray) 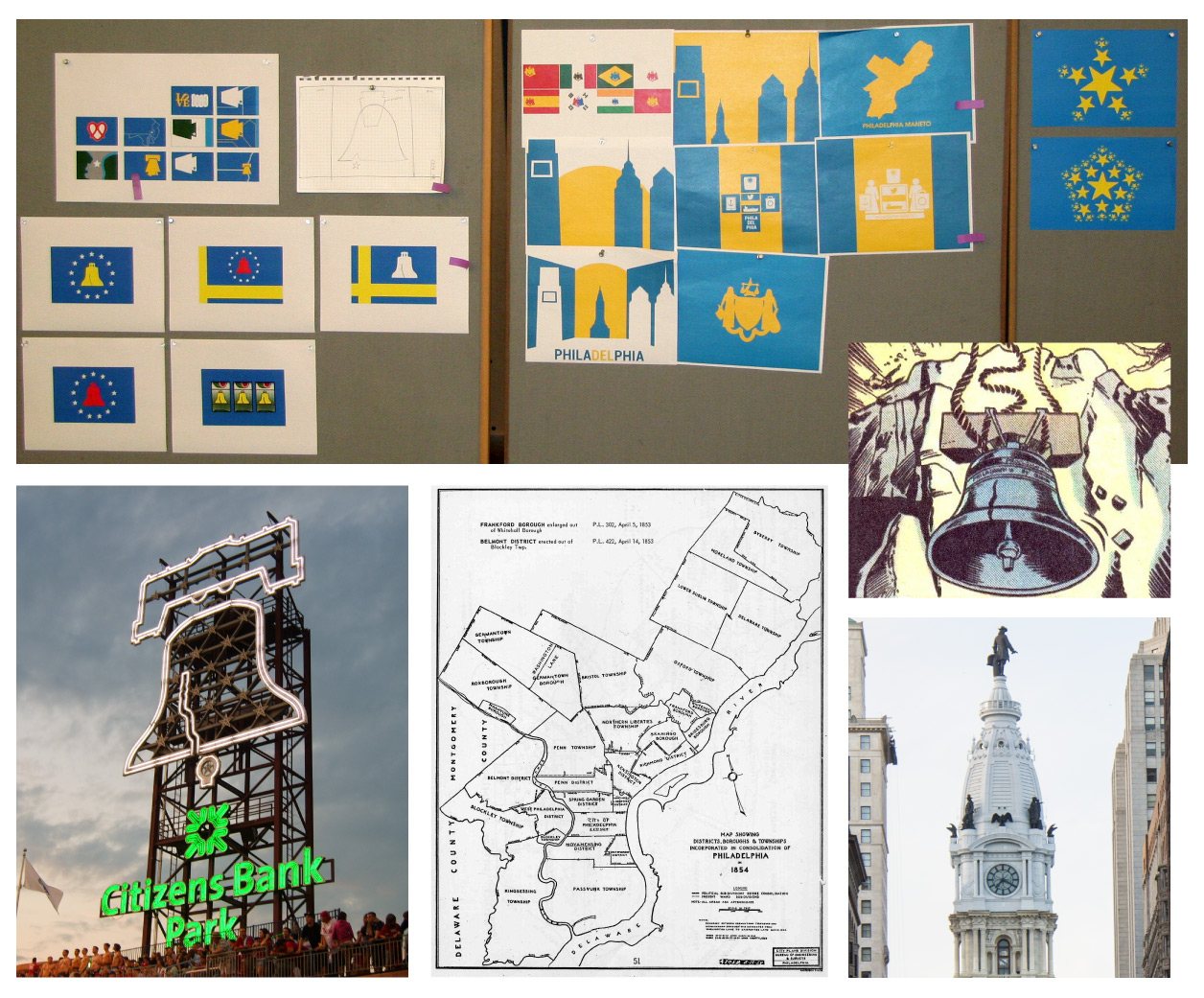 The brainstorming board, with some elements that came up over and again.

A smaller team of three — myself; graphic design intern, Ariel Esser; and interaction designer, Jim Monzo — began to consolidate and refine these ideas. We developed some symbols as well as considering ones presented by the staff. 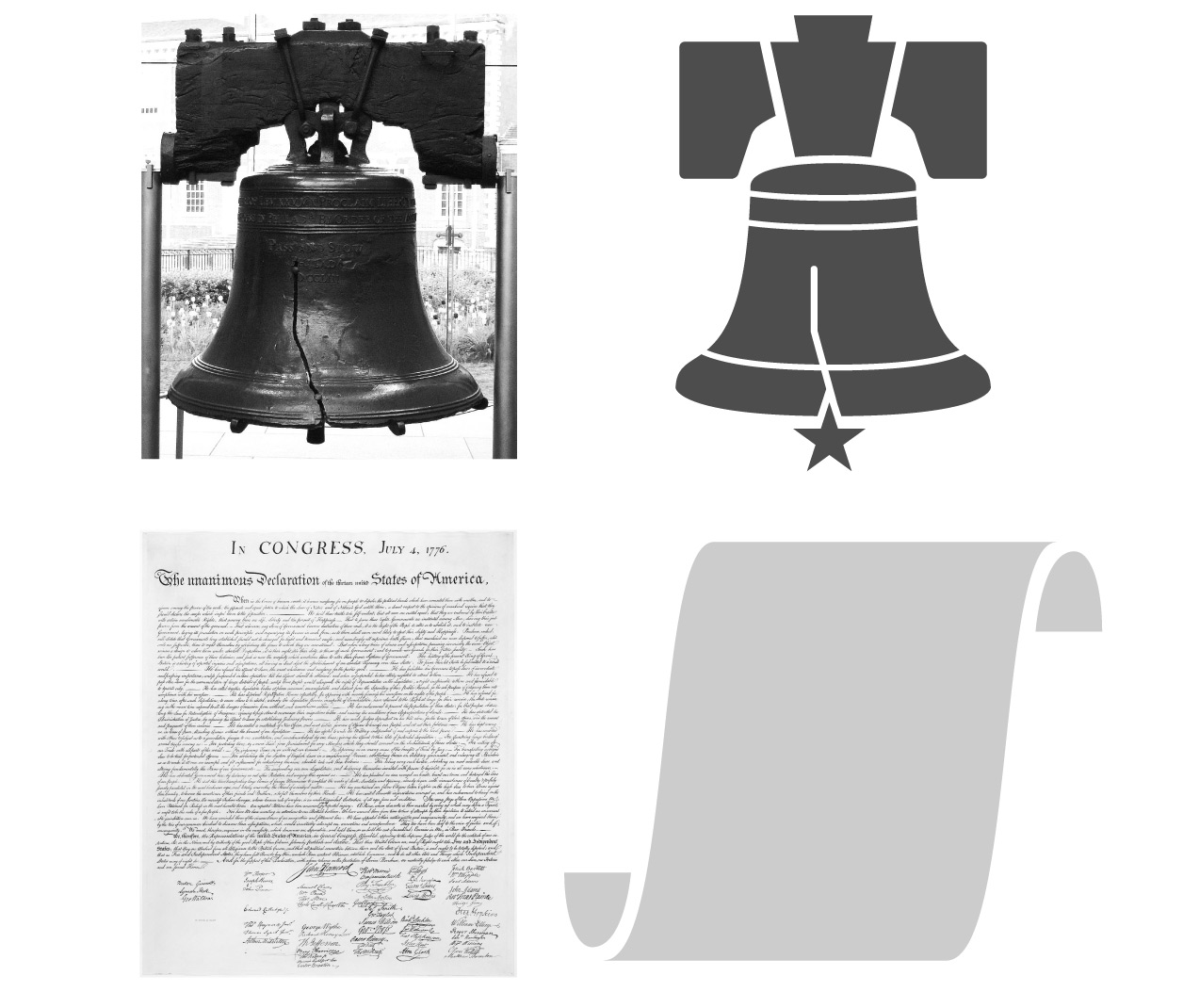 The Liberty Bell and the Declaration of Independence. 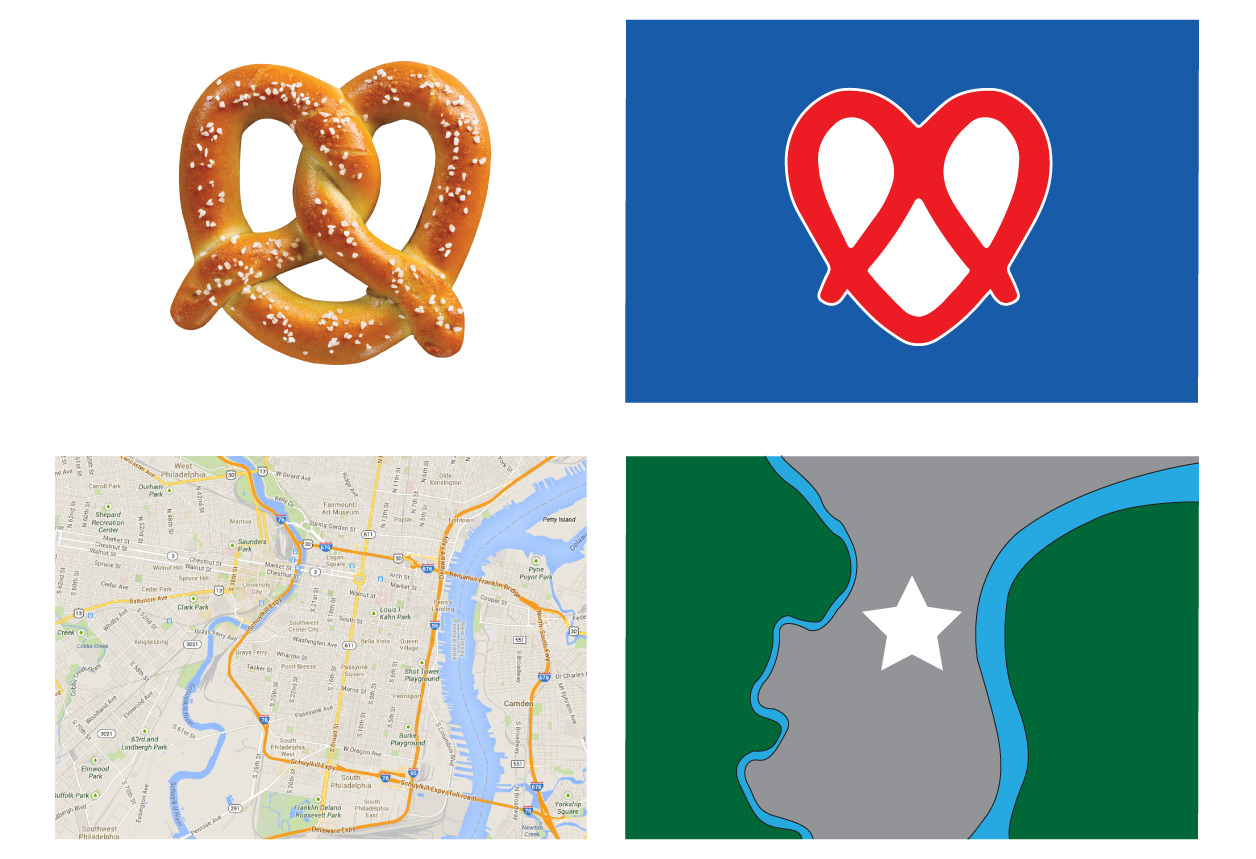 A brotherly love pretzel in Phillies red and white, and a city stuck between two rivers.

Many of the symbols and designs we considered were amusing or compelling or personal, but in the end, we narrowed the choices down to reflect the existing iconography of the city (the Liberty Bell and the Declaration of Independence) rather than forcing icons that might not resonate universally.

Here is the before (current flag) and after (our design): 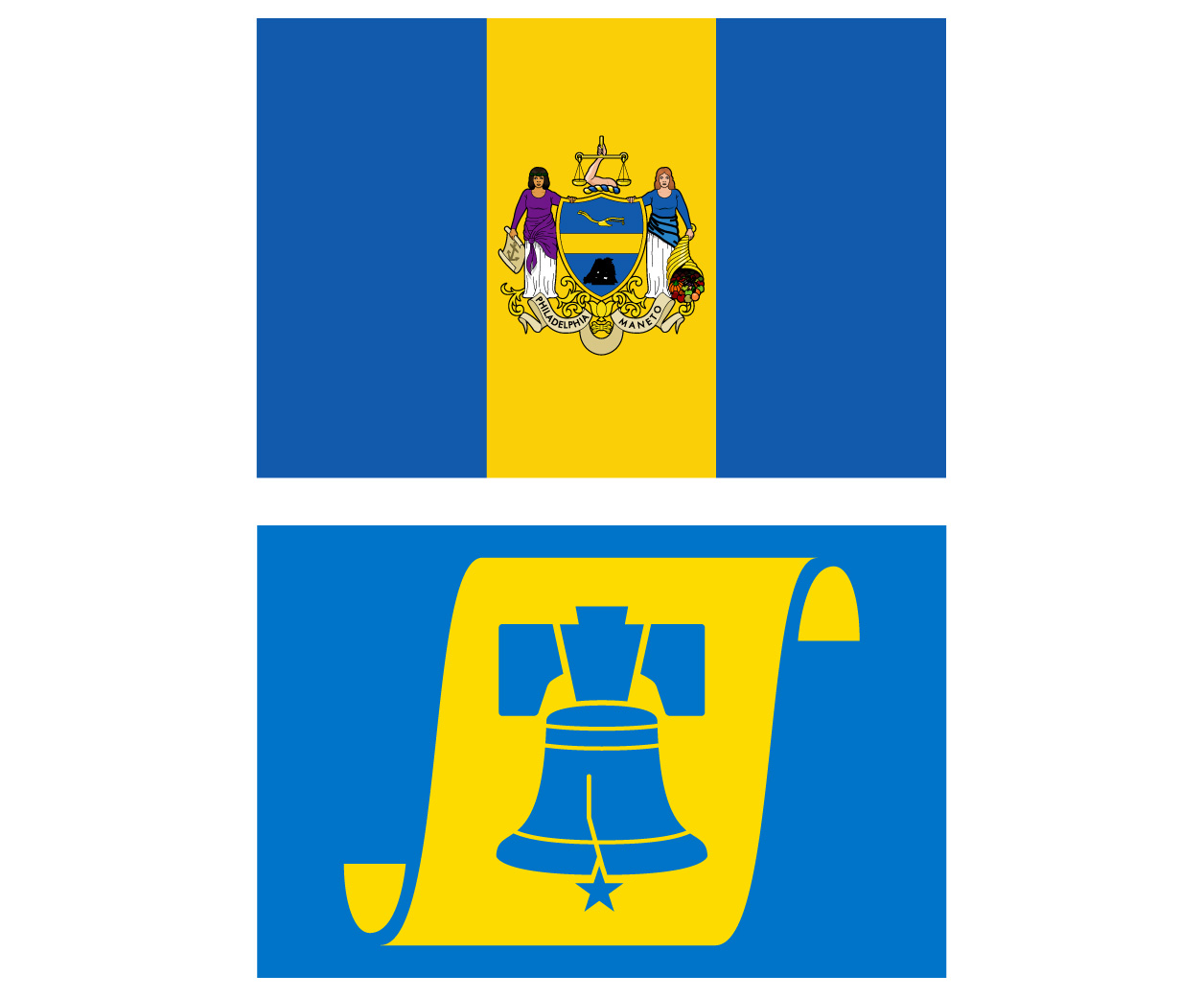 In our version, the yellow stripe at the center of the triband is a symbol for the Declaration of Independence, and the Liberty Bell is capped with a keystone. The star represents Philadelphia, just as each of my state flags had at least one star to represent the state.

Our choices might seem obvious, but I don’t equate obvious with bad or wrong. In my experience the obvious decision is most often the correct decision. I do agree that there is more to Philly than the Liberty Bell, but it is clearly a very potent icon of the city.

How would you redesign the city flag, if given the chance?