‘Our healthcare system is unsustainable.’ When politicians say this, they’re usually speaking in terms of cost. But it’s just as true in terms of medical device design.

Even as sustainable business practices have gained momentum in other sectors, with more than half of Fortune 500 companies launching sustainability initiatives, the medical device industry has mostly sat on the sidelines, gauging sustainability as an unaffordable frill.

But it’s not — sustainability is vital to the long-term health of our medical system, and the companies who lead the way will gain a substantial advantage over those who sit on the sidelines.

Sustainability Is Catching On

Efficacy, safety, and cost are the classic triad of medical device design. At the moment sustainability hovers just outside those well-established requirements. A client of ours conducted a survey that determined hospitals weren’t willing to pay a premium for more sustainable products. However, there are signs that this is changing.

Another survey, this one commissioned by Johnson & Johnson in 2012, found that fifty-four percent of hospitals rate the environmental friendliness of a product as highly significant when making purchasing decisions, and expect future requests for proposals to include “green” attributes. 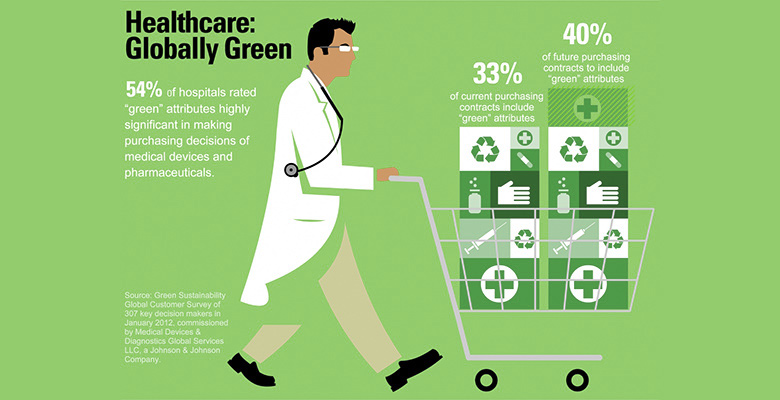 As consultants we’ve had success bringing on clients who are interested in sustainability, but wary of damaging their business model, by demonstrating how using less material or less energy in the manufacturing process will help their bottom line. Once the design is complete, however, they tend to start seeing the broader picture of benefits. It’s hard not to get excited at the prospect of improved brand image, customer loyalty, workforce satisfaction, and reduced regulatory risk.

The most persuasive argument for medical device manufacturers is cost — we’ve had success bringing along cautious adopters by telling them how much they’ll save.

The Potential and Promise of Product Design

Companies typically start down the road to sustainability by analyzing the most tangible aspects of their operations: power consumption in offices, recycling, and renewable energy. Compared to the impact of the products they manufacture, that’s just a drop in the bucket. Sustainable product design is the key to driving significant change.

Since sixty to eighty percent of the environmental impact of a product is determined during spec development and concept generation, we recommend incorporating sustainable design principles and tools into many of our projects from the beginning. As we described in an earlier post on how to develop a sustainable design process, we rely on an evolving life cycle analysis (LCA) that is updated throughout the project to help inform the decisions made along the way.

Since sixty to eighty percent of the environmental impact of a product is determined during spec development and concept generation, we recommend incorporating sustainable design principles and tools into many of our projects from the beginning.

For example, an industrial wire manufacturer was throwing away its bulky, wooden shipping reels after a single use because it was too expensive to return them to the factory. Our solution was a reel that easily dissembles and packs tightly for efficient return shipment. An LCA comparing these two systems helped us understand how many times the reel would have to be reused before there was an environmental benefit. From an economic standpoint the new reel pays for itself after four return trips, after which each reuse is essentially free. From an environmental standpoint, it needs to be used at least fourteen times. With this in mind we gave it a design life of thirty-six uses, and it will likely last much longer.

Similar savings can be had in the healthcare sector. The possibilities are made evident by devices that have already incorporated sustainable design.

Post-surgery, almost everything that touches a patient is discarded, creating seven thousand tons of medical waste in the U.S. each day. Welch Allyn took steps to reduce this waste and in the process made a fairly generic product — its TrimLine blood pressure cuff — distinctive and desirable.

They began with the observation that the tube sets on the cuff could be reused since they don’t touch the patient. Detaching them from the disposable cuff both saved money and decreased the environmental impact. They also changed material from PVC, which can be toxic to manufacture and has associated health concerns, to polypropylene which is more inert and easier to recycle. Welch Allyn now offers a one-hundred percent recyclable green cuff with detachable tubes. The cuff weighs sixty-seven percent less and has a sixty-percent lower environmental impact than their standard TrimLine cuff.

Hospira’s VisIV IV bag is another example of sustainable medical device design. It’s made from a multilayer bag material that makes an overwrap redundant — resulting in forty to sixty percent less waste than competitive IV bags.

One more example is BD’s Emerald syringe line, which uses thirty percent less material than conventional syringes. A conservative back of the envelope calculation shows that if all the syringes they sell were suddenly switched to the Emerald line it would save at least eight million kg of plastic per year. That represents about thirty-one million kg of CO2e emissions or the total emitted by about sixty-one hundred automobiles in the U.S.

Furthermore, through their Ecofinity Life Cycle program, those syringes can be collected, sterilized, and recycled into new sharps waste containers. This closed loop system is a significant steppingstone toward the holy grail of sustainability: to create a product that can be endlessly recycled back into itself or reused.

A Turning Point for Sustainability in Healthcare

Already, more companies and health care providers are beginning to realize that efficacy, safety, and cost don’t capture the whole picture — sustainability is also important. Some of the biggest healthcare providers in the U.S. have recently caught on.

Kaiser Permanente, one of the nation’s largest healthcare providers has made it a centerpiece of its business philosophy. And President Obama’s executive order 13514 requires VA hospitals and other healthcare facilities under the umbrella of the federal government to give preference to sustainable products. The order says that government agencies must “ensure 95% of all new contracts, including non-exempt contract modifications, require products and services that are energy-efficient, water-efficient, biobased, environmentally preferable, non-ozone depleting, contain recycled-content, non-toxic or less-toxic alternatives.”

This increase will dovetail with sustainability’s growing foothold in the healthcare industry. As with any company in any industry who wants to stick around long-term, no one will be able to ignore their impact (positive or negative) for much longer. There is a huge gap in the market and a huge opportunity for medical device manufacturers to meet the demand with differentiated products re-envisioned through the lens of sustainability.