Since our last internview, Bresslergroup has moved and grown significantly — and so has our internship program! 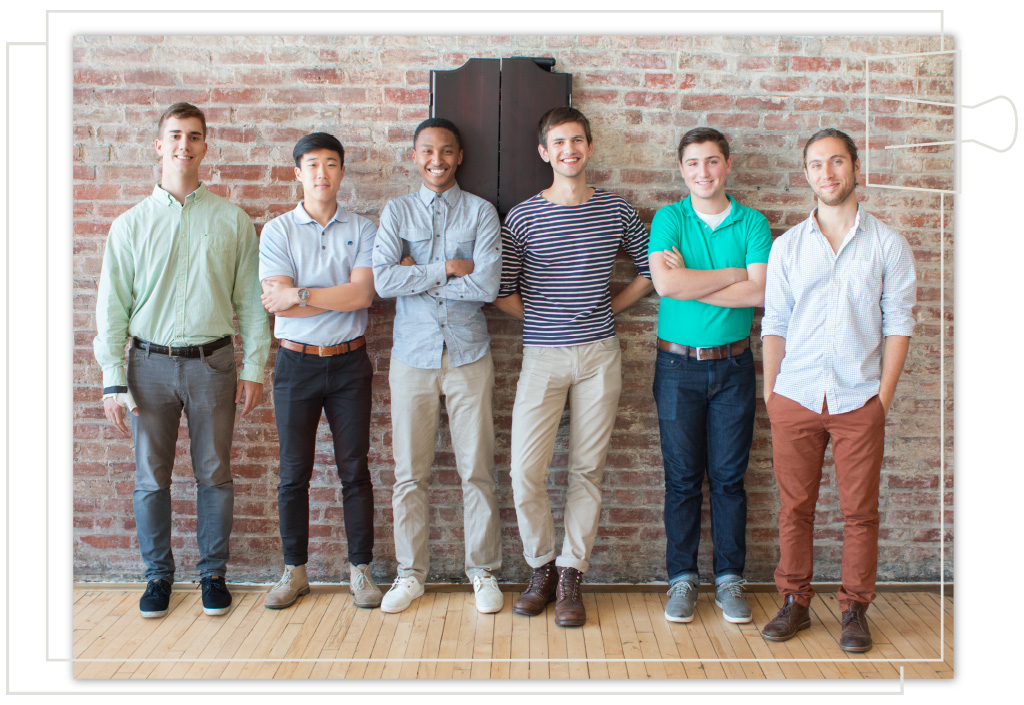 As is the tradition, we got them together for a roundtable and grilled them about their time here.

How They Got Here

James Lovey: Nick McGill is an alum of U of Penn, where I’m a student. After seeing him speak on a career panel I went up to talk to him and we geeked out for an hour about professors and mechatronics. I’m also in the Integrated Product Design program at Penn, where Peter Bressler and JD Albert teach, so I knew about Bresslergroup.

Pierre-Louis: I had a friend going to work on the East Coast and she suggested I look, too. I sent an email at 3 a.m. Paris time, and was surprised to hear back from Mathieu Turpault within minutes.

Chris: I was in a class at Philadelphia University that toured Bresslergroup about four years ago. Mathieu and Ed Mitchell actually gave a presentation that day that convinced me to go into design.

Connor: I interned at Rachio [an Internet of Things startup in Colorado and a Bresslergroup client] last summer. I was doing a lot of product design stuff there so I knew of Bresslergroup.

Khanya: I went to high school nearby, but I initially heard about the firm from an IDSA meetup at the Midwest conference last year. Also it’s a very visible and recognized brand in industrial design, so it seemed like the perfect place to gain experience.

What Surprised Them About Bresslergroup

Chris: I didn’t realize how many products BG works on.

James Park: It’s not as formal here as I thought it would be. Philly has a wear-your-suit-to-work reputation. I’m from L.A. where people wear flip-flops and shorts to work. This is a nice middle ground — really casual, but no one shows up in anything unprofessional. 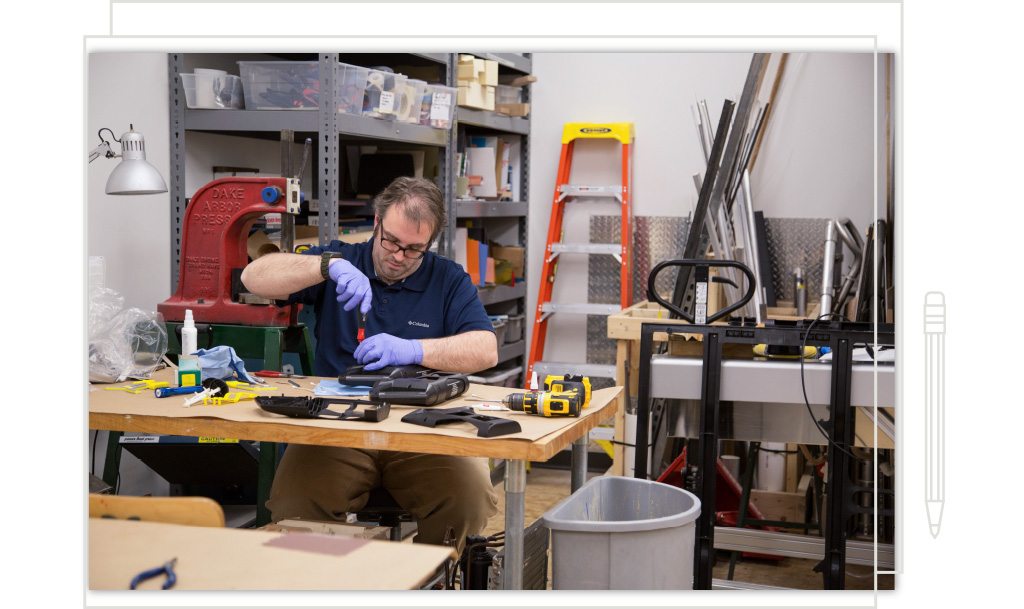 Connor: I was surprised by how much hands-on prototyping happens here. I spent a lot of time in the shop, building things.

James L: With previous internships there was always a little bit of lead time to assess capabilities. Here, within my first hour I was in a project meeting for BDAS+ and given critical tasks that were simple at first but they were all necessary — there was no busy work.

Connor: I had a similar experience of being thrown into the fire. They gave me the CAD and the parts and said, “Put it together.” It’s a good way to learn.

The Work (Thrown Into the Fire)

Chris: I did a lot of form iteration and concept renderings for a single project. I think I did more work on that one project than my entire senior year of college!

Pierre-Louis: I’ve been recruiting participants for user research for a medical product that will eventually help nurses and patients. It means a lot to me to be working on a product that will have so much impact. 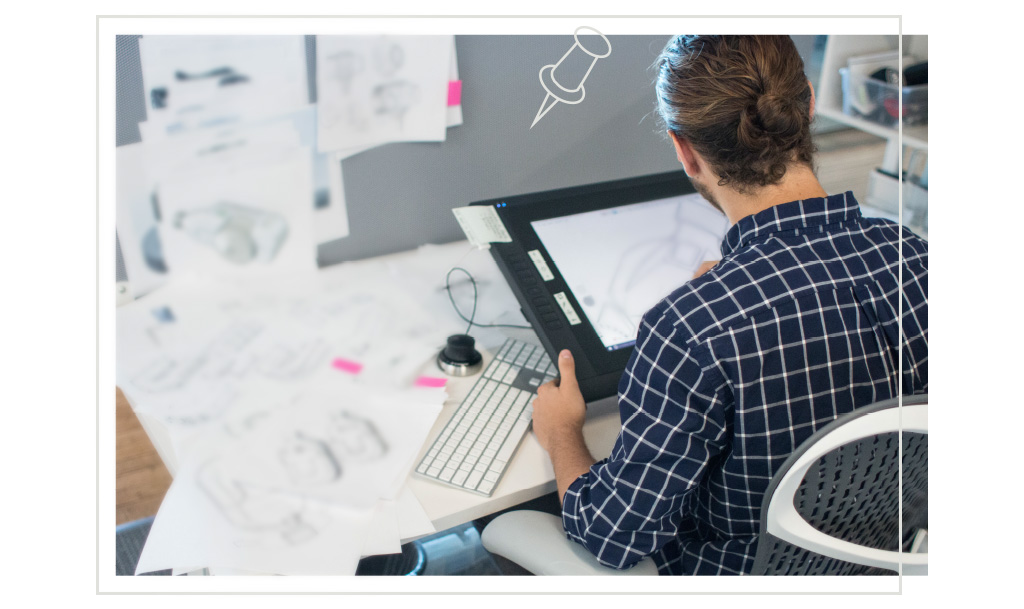 James L: I did a lot of engineering work, including validation testing, on BDAS+. I’ve worked on some other big projects doing competitor benchmarking, brainstorming and ideation for future products, and solutions to specific engineering challenges. I’ve probably touched 10 to 15 projects since I’ve been here.

It means a lot to me to be working on a product that will have so much impact.

James P: I’ve been coding for one project nonstop. I’ve also gotten the chance to work on some hardware stuff — I’ve soldered a ton of boards. But mainly I fix bugs all day!

Khanya: I’ve had exposure to medical products, military applications, and consumer devices, among other things I never expected to touch in my entire career!

Chris: I love that this is a nice space to work in — it makes you want to stay and work late. Having beer on tap makes it easier to work late, too. The people here definitely make you want to come into the office. We have fun. 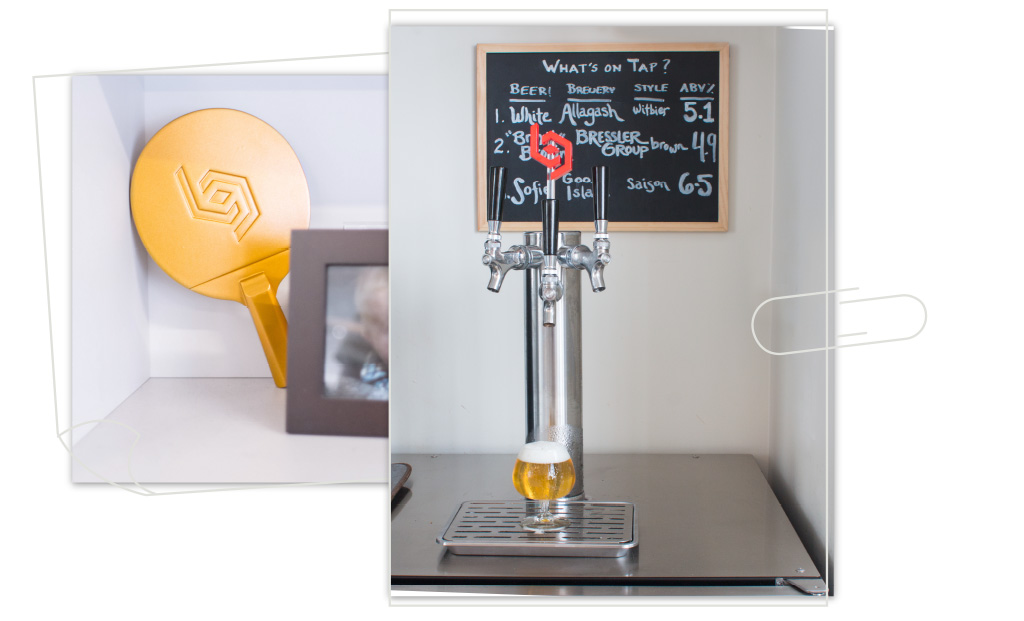 James L: In other internships, I’ve noticed that people get tense and worry a lot. Here, when things get hard, people will all gather around and say, well, what can we do next? It’s a really good atmosphere in terms of tackling hard problems and not letting them intimidate you. I like that in general everyone here is a designer or engineer, but when we come together we’re all problem solvers.

James P: I really enjoy all the happy hours — I wish we had more. 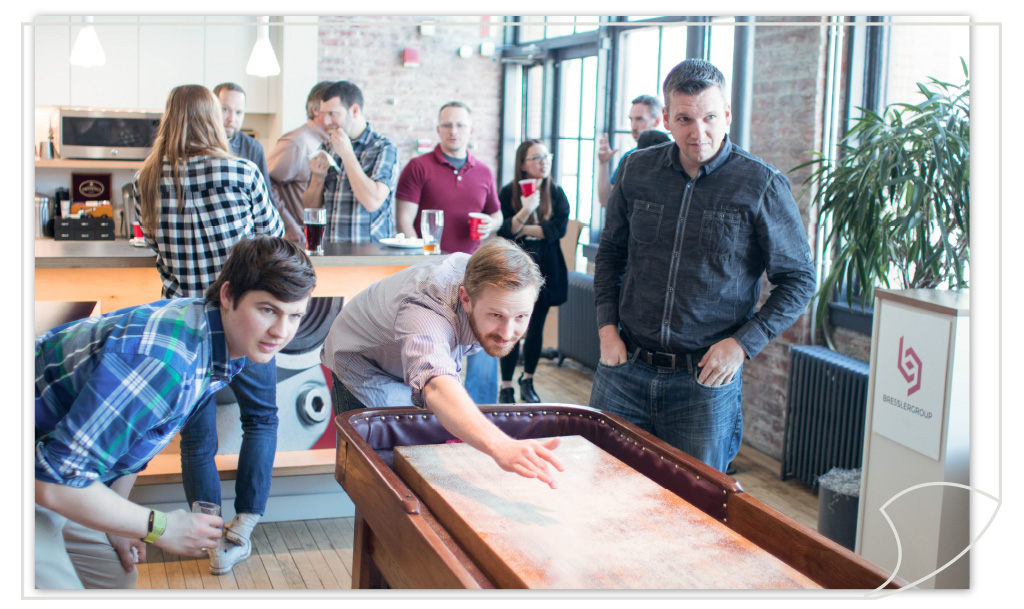 Chris: I got a lot better on SketchBook Pro and a lot of other programs.

Pierre-Louis: When you do user research as a student, it’s more anecdotal. Here it’s done so precisely, you can almost measure the trends you’re discovering.

James P: Coding was not my strongest suit before I came here — I’ve learned a lot. I actually googled computer science terms so much that I got the Google recruitment Easter Egg.

I googled computer science terms so much that I got the Google recruitment Easter Egg.

James L: Even though I’m an engineering intern, I got to learn a lot about design and general strategic thinking and project planning. These are all skills you can apply to anything.

Khanya: My key takeaway would have to be how best to conduct oneself and function in an environment that relies on good people doing good work. I feel as if I’ve learned so much about what kind of designer I want to be, and especially about how much more I need to improve to get there.

James P: Walking out of the lab and finding DiNic’s in the kitchen. I’ve also spent many hours at the ping pong table. 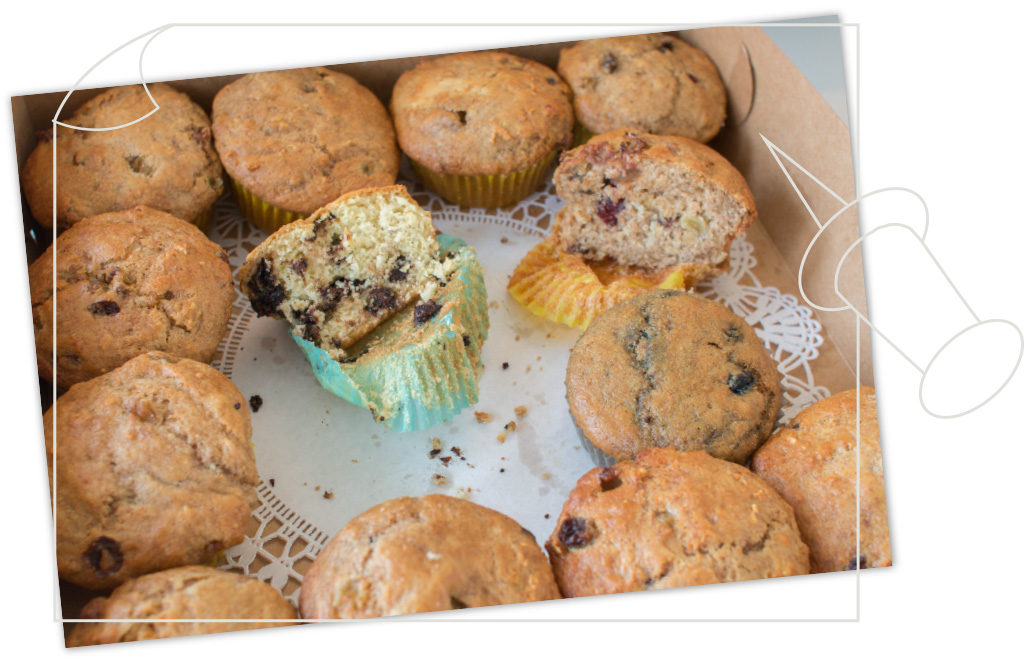 Connor: Working on a prototype for six weeks and one day finally making the right tweaks to it to get it to start working. Ed and I were high-fiving, and JD was showing it off to everyone. When we finally got it working, it was so cool.

I like that in general everyone here is a designer or engineer, but when we come together we’re all problem solvers.

Chris: The late night shuffleboard games. Sometimes Khanya and I weren’t so productive because we were playing shuffleboard between concepts.

The Most Challenging Moment

James P: Commuting to work during the Democratic National Convention.

Connor: A few times when I was asked to do something I had no idea how to do, especially different features of Solidworks I’ve never used before. I would Google it or ask for help. There are so many different levels of experience here, and everyone’s ready to teach you.

Pierre-Louis: Note-taking during user research interviews. As someone who doesn’t speak English as a first language, I feel like everything I’m doing is challenging but still doable.

James L: Being up against a deadline for a client who needed samples for tradeshows. The molded parts that came back from the manufacturer didn’t work and it took us a while to figure out why. Once we did, we all came together to assemble the new prototypes and get them out the door to meet that deadline. Your most challenging moments definitely turn into your best moments.

Influence on Next Steps

James P: This internship has solidified what I want to do. It’s helped me get a better sense of what it’s like to work at a company that does a lot of consumer products.

Chris: It was great to get a taste of consulting because this is definitely the realm of product design I want to be in. I love the diversity of the work and having a new project on the table every week.

It was great to get a taste of consulting because this is definitely the realm of product design I want to be in.

Khanya: From my experiences in college and exposure to different companies, when deciding whether to go into corporate or consultancy-based industrial design I’d fully expected to prefer corporate. Now, though, I feel like my time at Bresslergroup has allowed flexibility in that decision.

James P: Don’t wait around for people to tell you stuff. Take initiative and you’ll get a more valuable experience. Also, bring a lot of $5 bills for spicy chicken. 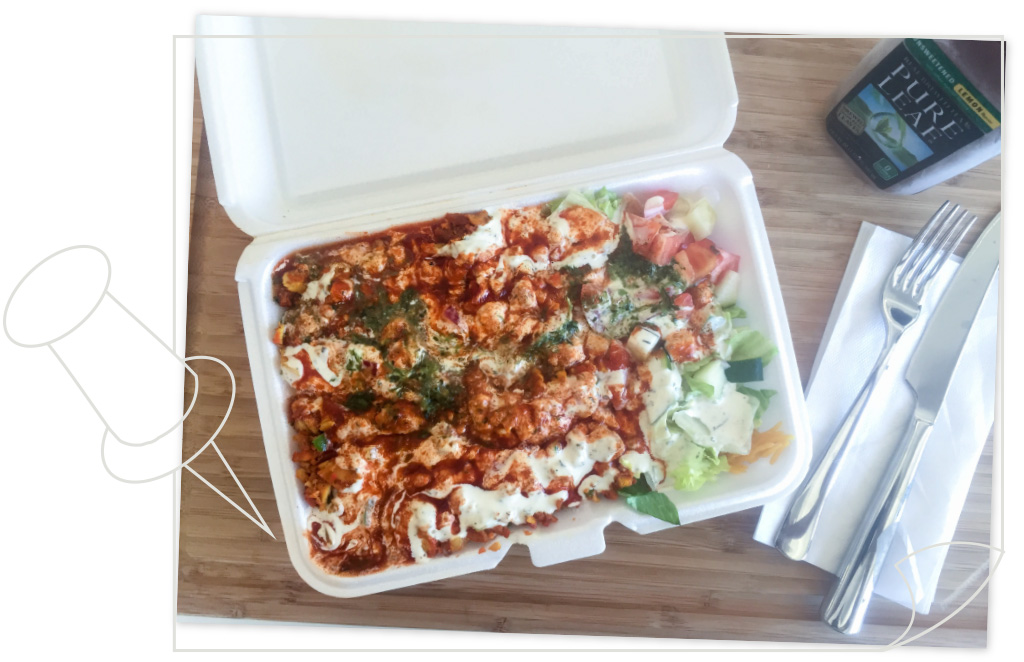 James L: Ask people how you can assist them, and they’ll find a way to fit you into a new project — you’ll get new challenges and build closer relationships. Try to work on a few projects that are in different stages — you’ll get a more comprehensive view of the process and will see what it’s like to ideate, do validation on prototypes, work with manufacturers. …

Take initiative and you’ll get a more valuable experience. Also, bring a lot of $5 bills for spicy chicken.

Chris: Be ready for a faster pace than college and be a quick learner. Professionalism is different in the real world — be on time. Leave your flip flops at home.

Khanya: Come into this position with the mindset of what you seek to gain from it by the time you leave. At a company as successful and prestigious as Bresslergroup, you can expect an incredible range of work to come across your desk any given day. It’s up to you to make the most of each of those opportunities to learn and improve. But don’t forget to look up from your screen every once in a while — the best thing about Bresslergroup may be the people working around you.

Thanks to all the interns for your time, and good luck to you! Keep in touch.