Our colleagues have written before about the differences between interaction designers and industrial designers. So when we flew to the Center for Advanced Medical Learning and Simulation (CAMLS) in Tampa a few weeks ago to lead an interaction design workshop at the inaugural IDSA (Industrial Designers Society of America) Medical Design Conference, we were wondering if we’d feel like we were from Mars.

Nope, not at all. Industrial and interaction designers have much in common: Post-Its, prototypes, and a preoccupation for creating products that solve people’s problems. And that’s a good thing, because as more products become embedded with interactive technologies, the synergy between industrial and interaction design that is already part of our everyday at Bresslergroup is becoming the standard in product development.

Our IDSA workshop was part of a two-day case study track focused on developing a tech-embedded device.

The challenge: A (fictitious) client wants to control the spread of infection in a hospital setting by leveraging two components — 1) a smart, disposable surgical gown and 2) a digital ID badge with the potential for a wide range of functionality. 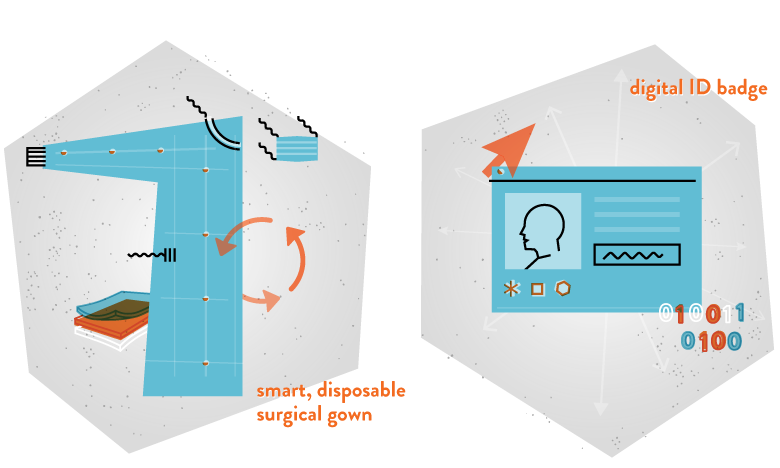 Here’s how it went:

Something else industrial and interaction designers have in common is the way they begin — ideally with contextual inquiry — to gain an understanding of the environment, the tasks, the users, and the tools for which we’re designing. At CAMLS, a state-of-the-art medical simulation facility in Tampa, everyone on the case study track observed one of three medical procedures with preplanned sterility breaches. 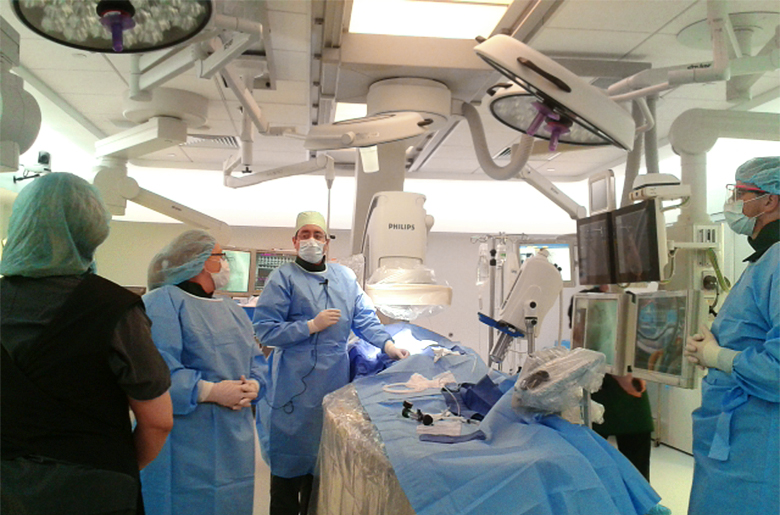 In the cath lab, we observed and took notes as we watched a simulation of a heart catheterization that went badly and led to open heart surgery.

Performing observational research in a clinical setting is serious business and presents unique challenges for researchers and designers. The goal of these sessions was to address these challenges and prepare the participants for research in these demanding environments.

The timeliness of a sterility challenge didn’t escape our attention. With all the talk of infectious disease in the news, this exercise had a ripped-from-the-headlines immediacy.

In the next sessions — insight translation — we jotted down our observations on Post-Its and categorized them according to setup, prep, procedure, and post-procedure. This helped us identify the risks associated with those observations, and from there we identified user needs. Next the teams pinpointed several opportunity areas. We chose to focus on “helping users understand when the sterile area has been breached.” 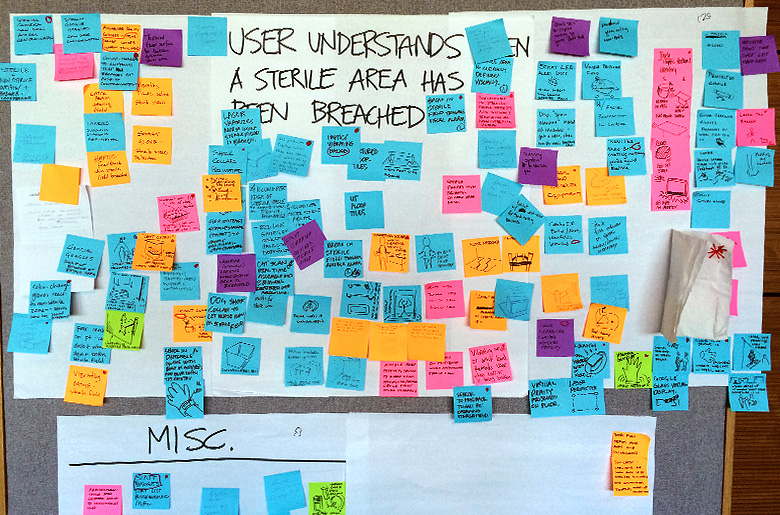 No wonder we all like Post-Its — how else would we get through insight translation?

This work resulted in a few concepts to pitch the “client,” who chose a gown with a visible window for exhibiting a digital badge embedded with RFID proximity sensors that alert the user and his co-workers when he or she has breached a sterile field. This tech-embedded badge would double as a digital ID along with being able to flag and track sterility breaches.

It would also be important to identify and delineate the sterile fields — the operating table and other work areas in the OR; and the rectangular area encompassing a person’s chest, arms, and hands held at chest height (see the middle square, below, for a rough sketch of this area). Come close to the boundary, and the badge would send a vibrotactile warning (a buzz).

Breach these zones, and the badge would turn red to alert others that the healthcare professional needs to leave the area and re-scrub if he or she wants to return.

We imagined a further iteration with a limb-specific vibrotactile buzz, and we also talked about it working in the opposite fashion for people who aren’t supposed to be in the sterile field — a circulating nurse, for instance. Built into this concept is the expectation that a healthcare worker will learn safer behavior over time by tracking his own progress. The badge makes him accountable for his own sterile status and breaches. 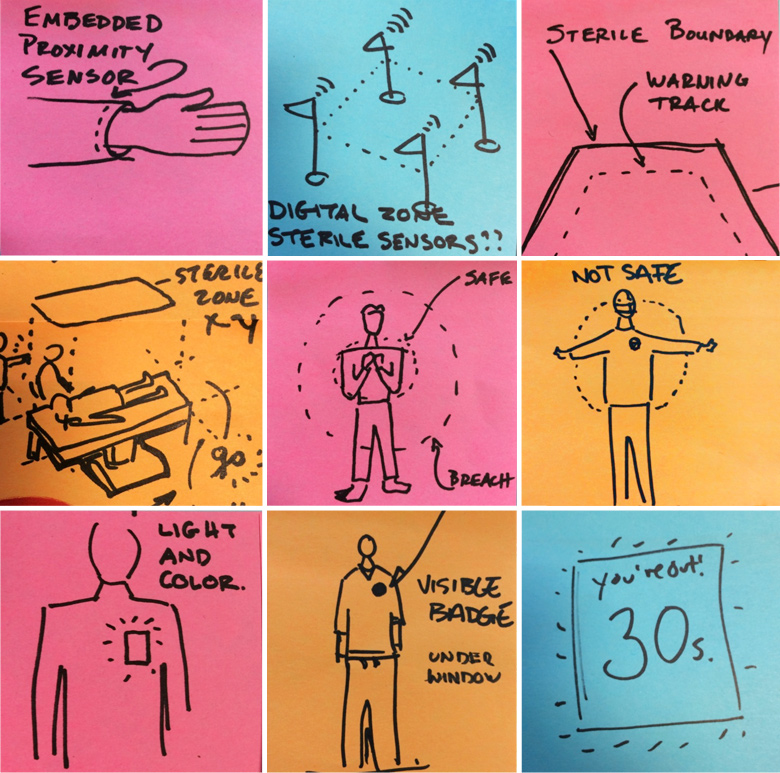 Aspects of our concept were inspired by laser tag and the electric fences that deter dogs and deer.

This is where our interaction design expertise came in. With our concept defined, we led the group in an exercise to map the user flow for a surgeon who breaks sterile protocol, is “timed out,” and has to re-scrub.

Typically, we explained, interaction designers start with the “happy path” — or what is supposed to happen when the device works well — before diving into the edge cases and error flows.

To map that path, we asked ourselves:

Afterward we refined the user flow and created an interactive prototype that we could take into user testing the next day. We built the interactive click-through prototype using Axure, and another team put together a gown prototype. 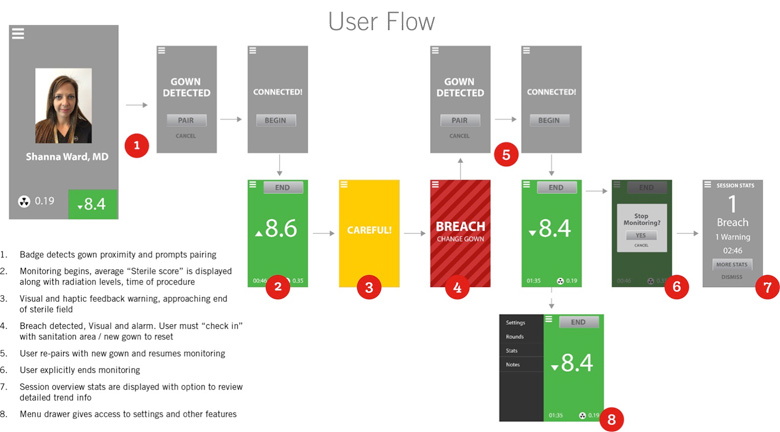 The refined user flow and its translation into an interactive prototype via Axure.

We combined the gown and our interactive prototype, running the latter on an Android phone hanging around the user’s neck, under the gown, and behind the window. Using the prototype, we took the workshop participants through IFU (instructions for use) development, risk analysis, and usability testing.  Our quest to crunch a multiyear product-development lifecycle into two days was complete. 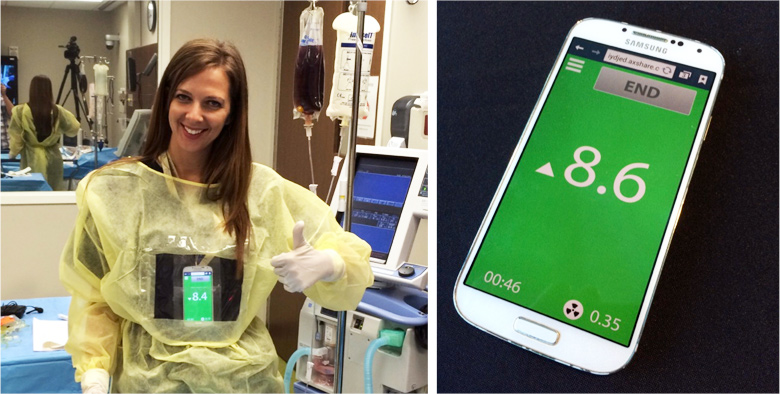 Our prototype gets a thumbs up; at right, one of the screens we created using Axure. 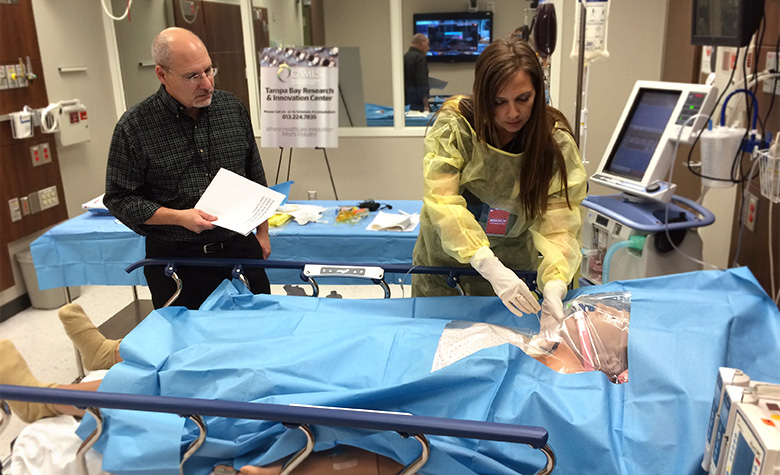 Usability testing at CAMLS with our prototype.

Cohabitating in the Usability Ecosystem

Ultimately the industrial designers in our workshop were surprised by how iterations in interaction design can go on … and on and on. When you’re working with software, you can keep testing and improving. A software interface is endlessly configurable.

Not so for hardware: Unless you’re designing a Transformer, the product’s form quickly becomes fixed. And once you’ve invested in tooling for injection molding or some other manufacturing process, you’re probably not going to change much. That’s a major cultural difference that industrial and interaction designers need to work out when they go to develop in parallel. An interaction designer’s work is never done …

But back to what we do have in common: The theme of this conference was the Usability Ecosystem. We all prioritize usability — the practice of making sure a design is a good fit for its users. We had a great time talking with other usability and product design experts as well as exploring what Conference Chair Sean Hagen described in his invitation as “the evolving synergy between the industrial design and human factors engineering disciplines.”

(Click here if you’re wondering, What does interaction design have to do with human factors?)