(This article first appeared in the Winter 2016 issue of Innovation, the quarterly of the Industrial Design Society of America.)

Ten grad students sit around a long table in a glass-walled room at the University of Pennsylvania’s shiny new Education Commons. Along with the expected laptops and water bottles, random objects enliven the table’s surface: a small, yellow oval box; a painted ceramic bowl; a block of exotic wood.

The students’ assignment for today, along with some reading, was to bring in a meaningful object. They‘re here for “Communicating Design: Object Stories,” the design writing workshop I’ve been teaching at Penn’s Integrated Product Design Program for the last three years.

In this workshop, we talk about what writing and design have in common, and we experiment with different approaches to storytelling about design. Students write two 300-word essays — one personal and one journalistic — and an Instagram post, all about their object.

Writing about a meaningful object can suggest strategies for designers looking to imbue new objects with meaning.

What’s the value of a writing workshop for design students? First, many people lack confidence about writing, and I have met many who dread sitting down to write. This workshop gives non-writers some practice, reassurance, inspiration, and tools to ease the sometimes awkward and stressful act of writing.

Second, learning how to execute a piece of writing teaches skills designers need. The act of storytelling, whether you’re making observations, conducting research, plotting story structure, self-reflecting or considering your audience, strengthens empathy and provides perspective. The choices made while writing — about structure, word selection, pacing, dialogue — have parallels to choices made while designing.

Lastly, writing about a meaningful object can suggest strategies for designers looking to imbue new objects with meaning.

Getting Ready to Write

I borrowed the idea for this workshop from the curriculum of the two-week Summer Intensive offered by the School of Visual Arts’ DCrit (now called Design Research) program where I was a student a few Junes ago, sitting around a table like the one at Penn.

During the course, we were asked to bring in and write about an object of personal significance. I brought an Amtrak ticket stub left over from my trip to New York City from Philly earlier that week. I wrote about the visceral rip-and-click of it by the conductor, its secondary use as a bookmark, its poorly designed information hierarchy and how it symbolized my (then) state of limbo between two cities. 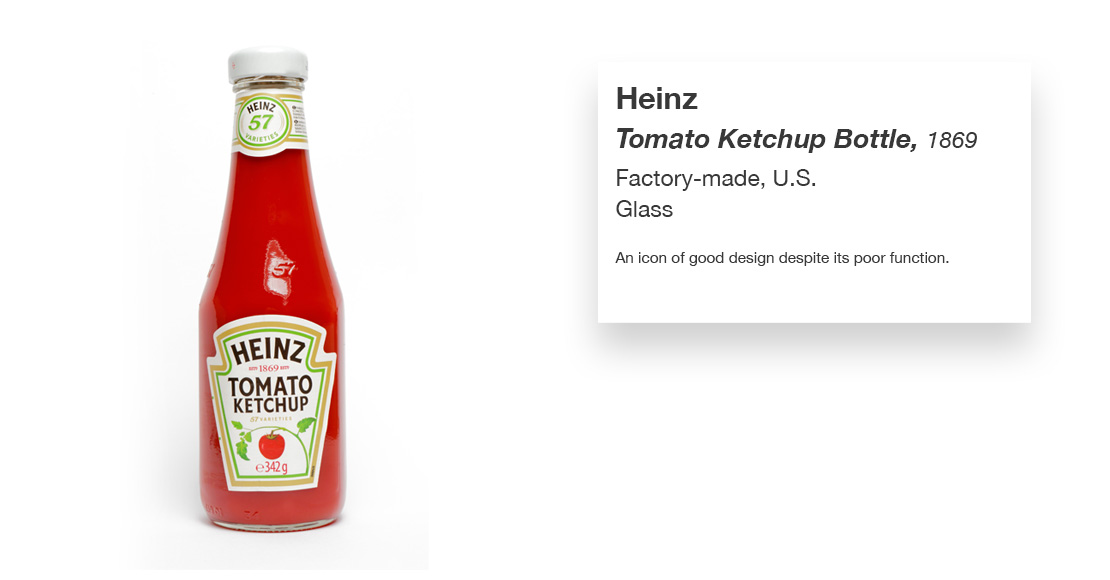 At the Penn Design workshop, the first thing we do is talk about what writing and design have in common. Then we look at the readings I assigned as homework, including “Who Made That Progress Bar?” by Daniel Engber and “An Icon, Despite Itself,” design critic Alice Rawsthorn’s New York Times piece about why the Heinz ketchup bottle is held up as an example of “good design” despite its failure to fulfill the first rule of good design: Be functional.

Why does Rawsthorn choose to repeat the phrase “good design” three times in the first three paragraphs? How does she choose to open the piece and end it? In a really tight piece of writing, each element — every word, anecdote, choice of what to quote as opposed to narrate — is well-considered.

The “No Research” Essay

Their minds swimming with opinions about word choice and pacing, I ask the students to write a “No Research Essay,” approximately 300 words about the personal significance of the object they brought in.

How did they come to own it? How do they feel about it? Why did they choose it? Is the object a totem of something — of some place, some moment, some person? Does it carry emotion? Which senses does it evoke, and how? How does it feel, look, and smell? Writing about objects from this personal point of view is an exercise in self-reflection — kind of like user research with yourself as the subject.

In the years I’ve been doing this workshop, I’ve seen people bring in and write about a bicycle, a Mason Jar, a Kindle, dinner plates, a 3D-printed “3D,” jewelry received as a gift, a vintage purse, and many more objects.

IPD student Sarah’s essay is a good example of how the exercise works. She writes about a box of worry dolls from the perspective of her four-year-old self. Her aunt had given them to her one restless night when she was having trouble falling asleep.

“She handed me a tiny wooden box,” Sarah wrote, “playfully decorated with pink and green lines. I opened the box and found tiny people with clothes woven out of thread and faces made of three dots — two black ones for eyes and one red for a mouth.”

When Sarah comes across this box of dolls as an adult, she’s overcome with the memory of that night and of “the calm, safe space” that her aunt’s house provided in the years that followed.

What is it about this object that makes it more significant than the hundreds of others you own?

Stories like Sarah’s that explore the writer’s emotional connection with the object are the most compelling. What is it about these few objects that make them more special than the hundreds of others we own?

Thinking about how and why relationships between humans and objects form and evolve is an important question for designers to consider. Writing personal pieces about meaningful objects is also a practice in empathy — and the ability to empathize gets stronger with practice.

While I was at the School of Visual Arts, our teachers sent us out into New York City to look for an object to research and write about. I went to Kiosk, a favorite store in the West Village that has, sadly, since closed (although their website is still up and is fun to peruse). It stocked mundane, utilitarian objects from around the world and displayed them like works in a museum.

I saw Snake Mint Can, the gag with the spring-coiled snake, at Kiosk and immediately knew it would be my object. I had had the Fancy Salted Mixed Nuts version as a kid, and I could recall the thrill of using it to prank my grandparents who dutifully feigned surprise every time.

Back at my desk, I started digging into its past. I quickly realized the Snake Mint Can’s story passed the test suggested to me by Alice Twemlow, the director of the SVA program, for deciding whether or not to write about an object: She told me, “Ask yourself, ‘Why does it matter? Why would anyone but me care about it? What’s at stake here?’”

Beyond the fond memories of childhood hijinks, this object contained some larger, universal narratives: that of the self-made inventor/entrepreneur, the death of small business by overseas manufacturing, the family business that fails in its third generation.

Beyond the fond memories of childhood hijinks, this object contained some larger, universal narratives.

The story even came with an intriguing protagonist: Soren Sorensen “Sam” Adams, a prolific inventor of novelty gags who was described by his contemporaries as a dour, serious guy. He conceived of the Jumping Snake after watching his wife, Emily, try to pry open a stubborn jam jar.

In my research, I found a 2004 NPR interview with author Mark Newgarden conducted at the S.S. Adams factory in Neptune, New Jersey, that describes the special machine that manufactures the gag. I started writing, folding those great sensory details into my draft.

I wrote, “The fifty-year-old Jumping Snake machine feeds, cuts, and coils the wire spring. An employee pops it off, stuffs it into a plastic snakeskin-print sleeve and into an aluminum can labeled ‘Fancy Salted Mixed Nuts’ or ‘Delicious After Dinner Mints.’”

That description makes the South Jersey factory near where Soren’s parents settled when they immigrated from the Netherlands in 1881 feel more real to the reader. And this makes its later demise sting all the more.

By 2004, I learned, the company was dwindling. Expired patents — Sam Adams secured 37 in his lifetime —combined with overseas manufacturing were putting the squeeze on the company. On April 1, 2009 (yes, April Fool’s Day), the company was acquired, and today the factory building houses a retail operation that sells pianos, largely made overseas. 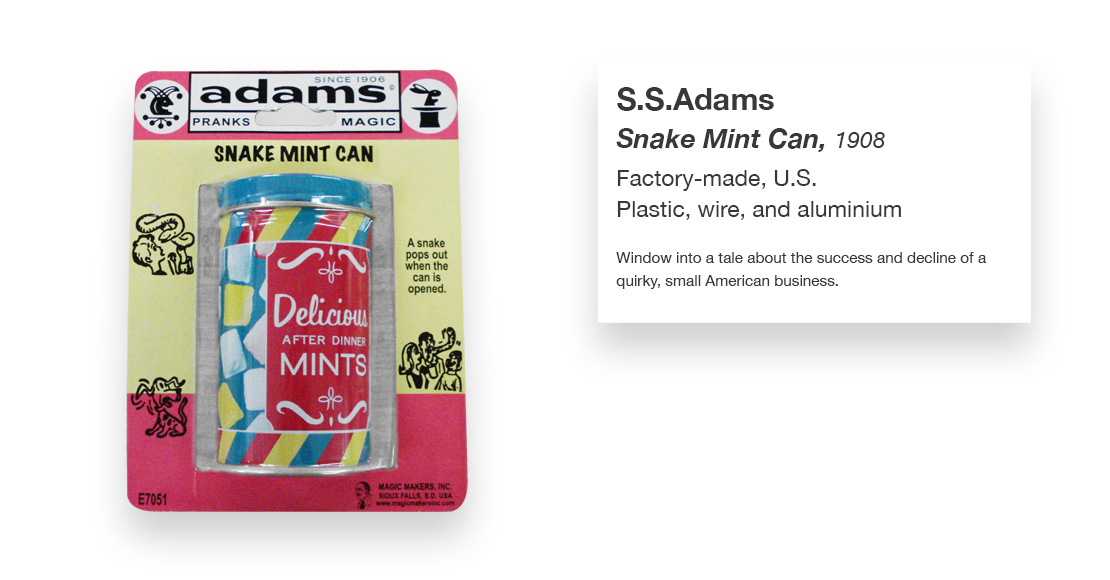 I pass around the Snake Mint Can as I prep the Penn Design students to write their “15 Minutes of Research Essay.” It requires a journalistic point of view. Just as when they design a new product, they need to consider, “Why does this object matter? How do I design this story so it will have impact? Why would anyone but me care about it?”

I give them a list of questions to guide their research: Who was the product’s muse? Its maker? Can you find out any details about its materials, manufacture, competitors? How do people interact with it? Do people use it differently from its intended function? What does this object communicate about the era, region and culture in which it originated? Is it “good design”? What’s at stake here?

As one of my Bresslergroup colleagues has said, designers are no longer designing just the toaster — they’re designing the toasting experience. That experience is most successful when it has a well-crafted narrative arc.

The Penn Design students’ final task is to write an Instagram post about their objects. First we compare and contrast a couple of Instagram accounts featuring everyday objects and discuss how their outlooks and voices differ. Then we pull out our phones, take pictures, and write. 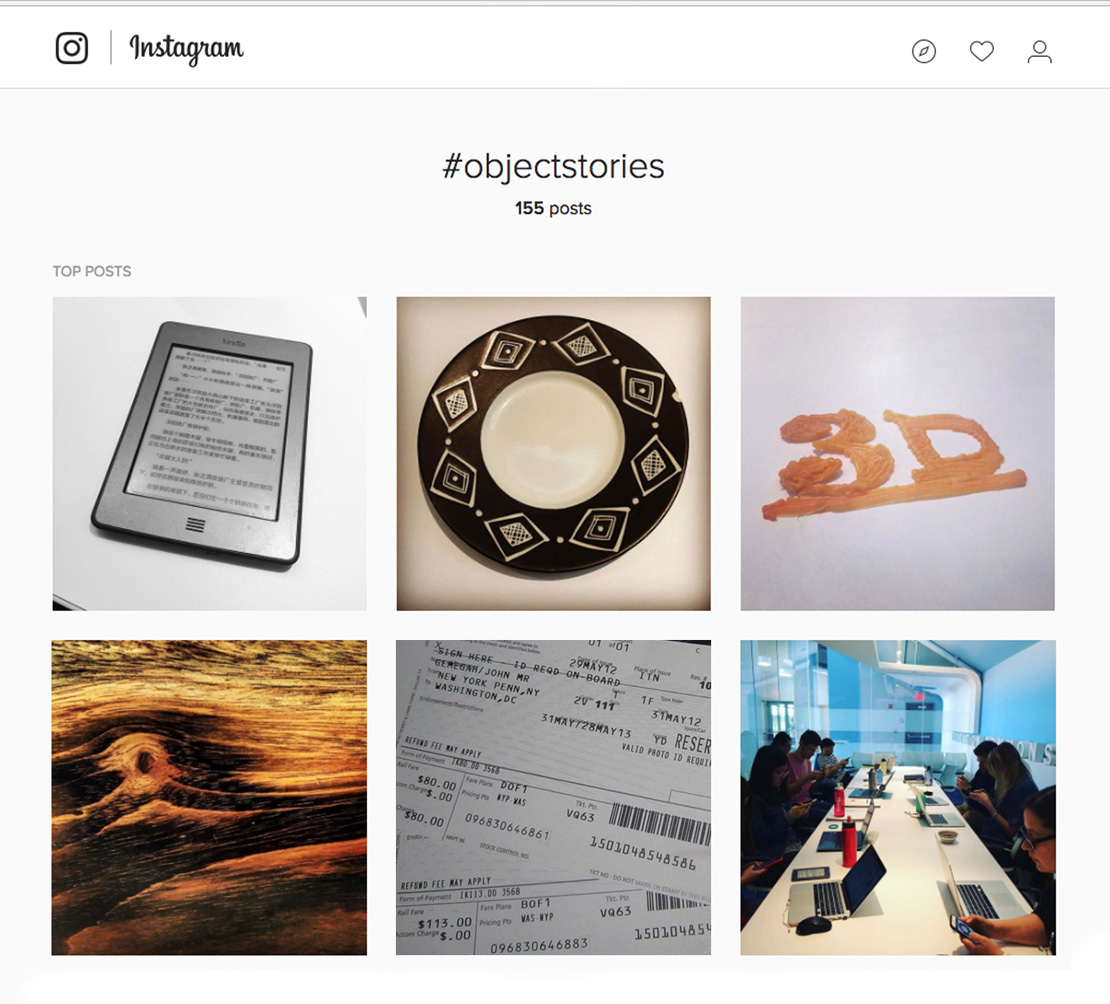 The student with the block of wood gets a closeup of a lovely knot: “Eye of the storm. #objectstories #wood #woodgrain #jobillo.”

Another snaps her small ceramic bowl against the white table and writes, “A bowl that once belonged to a respected Jesuit scholar and now holds the chapstick of the woman who found it. #objectstories #legacy #imaginedpast.”

Intriguing, right? How about you? What object would you choose? How would you tell its story?

What Writing and Design Have in Common