We asked around the office recently for a show of hands: More than a third of Bresslergroupers have relocated to Philadelphia. According to the Huffington Post, where an article named Philly one of the top 10 places in the U.S. for relocation, we’re right on trend.

If you live here for any amount of time, you begin to adopt the low-key, self-deprecating attitude of the Philadelphia native. That’s part of the city’s appeal. But during the Comcast-sponsored Tomorrow Tour that recently convened Philadelphia entrepreneurs, and technology and innovation influencers, the consensus was that Philadelphians need to brag more about our city.

In that spirit and in the tradition of the social media hashtag, #whyIlovephilly, created by Philly Love Notes, here goes: Why we love Philly, through the eyes of the Bresslergroupers who moved here from somewhere else — and stayed.

Vlada Belozerova, a senior industrial designer who moved here from Madison, Wisconsin a few months ago, is our most recent transplant. She keeps uncovering new charms in her new hometown. Just as tackling the mundane aspects of the future excites her about her work, she’s continually intrigued by her encounters with the extraordinary ordinariness as she goes about her daily life here.

“There’s an element of grit and quirkiness in Philly that I think is missing from many of the cities that get more buzz,” the 32-year-old Belozerova says. “It’s nice to find a place that’s maybe not as polished, that isn’t always trying to be New York.” Lonely Planet, whose editors just named Philadelphia the #1 place to visit in 2016, calls this our “uniquely gritty flavor.” New Yorkers seem to like it too, because plenty of them are moving here.

Lonely Planet, who just named Philadelphia the #1 place to visit in 2016, calls this our ‘uniquely gritty flavor.’

In moving from Madison, Wisconsin to join Bresslergroup, Vlada assumed a role in a strong creative economy that recognizes the relevance of such authenticity and localism. Research by the Philadelphia Office of Arts, Culture and the Creative Economy shows that the city’s creative sector employment grew 6.3% from 2001 to 2011. Nearly 50,000 jobs exist in that sector, representing 6.5% of all jobs in the city and yielding $5 billion in direct output and $2.7 billion in direct employee earnings. 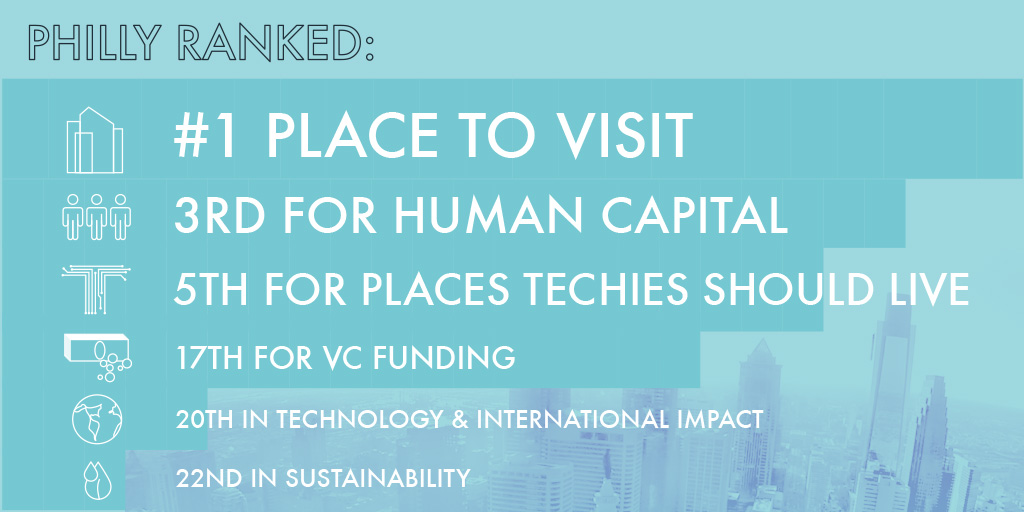 Philly’s thriving startup scene gets it onto lists such as the Huffington Post’s Top Cities for Techies (Philly ranks #5 out of 10).  And I especially like this take on our tech community — Philly is one of the 10 best U.S. cities for women in tech. We’re also #17 on the list of top 100 metropolitan regions for VC funding — ranked by the National Venture Capital Association according to the amount of VC money invested in businesses in those regions in 2014. Take a look at Select Greater Philadelphia’s most recent regional report and  Technically Philly’s awesome snapshot of our start-up and innovation economy (co-working! capital! community!) for a whole picture of the region’s growing business profile.

When Belozerova and her partner were ready to leave Madison, though, the equation was more about quality of life than numbers. Since graduating from Rochester Institute of Technology, she has worked in a handful of midwestern cities, including St. Paul and Milwaukee, and she knew what she liked. “For us, it was a process of elimination,” she says. “We had ruled out places like San Francisco and New York which can seem so much like Disneyland. We wanted to live in a big city, though, since we don’t drive and public transit is very important. We like history, too, and a sense of character.”

We wanted to live in a big city, since we don’t drive and public transit is very important. We like history, too, and a sense of character.”

Philadelphia seemed to fit the bill. “We were excited about being on the East Coast,” she says, “without having to endure the hassles and long hours and shoe-box living that comes with New York. Philly has a great international airport, which is a big plus, and it’s so affordable. It’s not creative to be surrounded only by wealth — wealth leads to sameness, I think.” 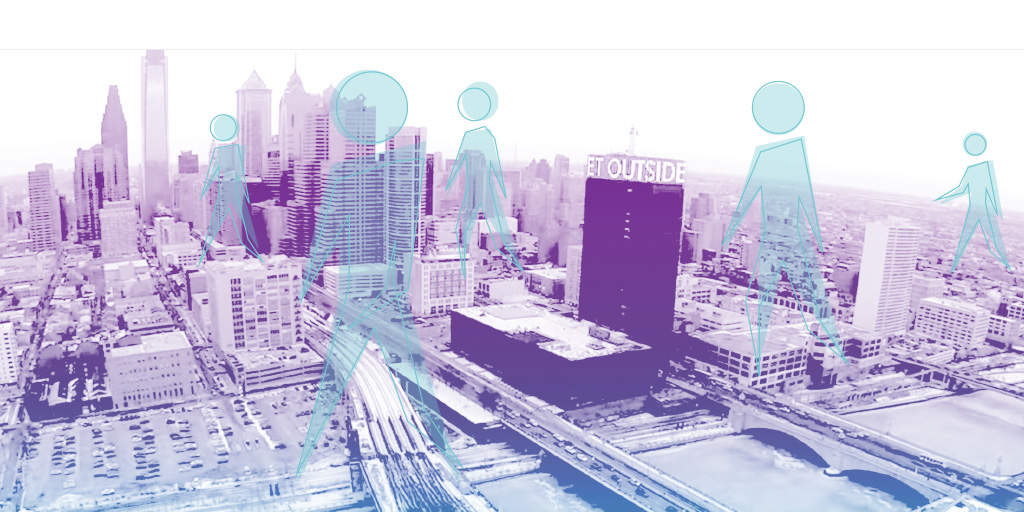 According to a Philadelphia Inquirer analysis of two reports released last year, housing costs here are not only the lowest among the nation’s biggest cities, but are lower than those incurred by the average American in general. Incomes, too, are higher in this region than in the country as a whole — which means Philadelphia-area residents can afford more house for less money than those who choose to live in Atlanta or Austin, Boston or Boulder. Out of the Northeast U.S. metros, we have the lowest cost of living and the shortest commute time — an important quality-of-life metric.

Philadelphia-area residents can afford more house for less money than those who choose to live in Atlanta or Austin, Boston or Boulder. Out of the Northeast U.S. metros, we have the lowest cost of living and the shortest commute time.

Best of all, says Belozerova, you can enjoy much of what those places have to offer right here. “If I want the access to nature that you get out west, the Wissahickon trail near where I live in Manayunk is fantastic,” she says. “Walking around the Loft District, you might as well be in Chicago. And Rittenhouse Square feels like I’m in Boston. You can have any of these cities here in Philly,” she says. “You can make Philadelphia yours.”

Tom Murray is a senior industrial designer at Bresslergroup who moved to Philly two years ago from Baltimore. “There’s so much design talent here,” he observes. “I participate in portfolio critiques at University of the Arts,” he adds, “and I’m always impressed by the students and their work.

Walking around the Loft District, you might as well be in Chicago. And Rittenhouse Square feels like I’m in Boston. You can have any of these cities here in Philly. You can make Philadelphia yours.”

Murray, 36, bumps up against that teeming creativity day-to-day too as he bikes the ten-minute ride from his home in the happening Graduate Hospital neighborhood to Bresslergroup’s studio, located (yes!) a half block from Reading Terminal Market and a few steps from the sensory overload of Chinatown.

“My neighborhood is filled with young people who attend all of these design schools,” he says. “And my wife and I really love their energy. We love that we can afford to own a home right downtown and just walk outside and be immersed in the city.” 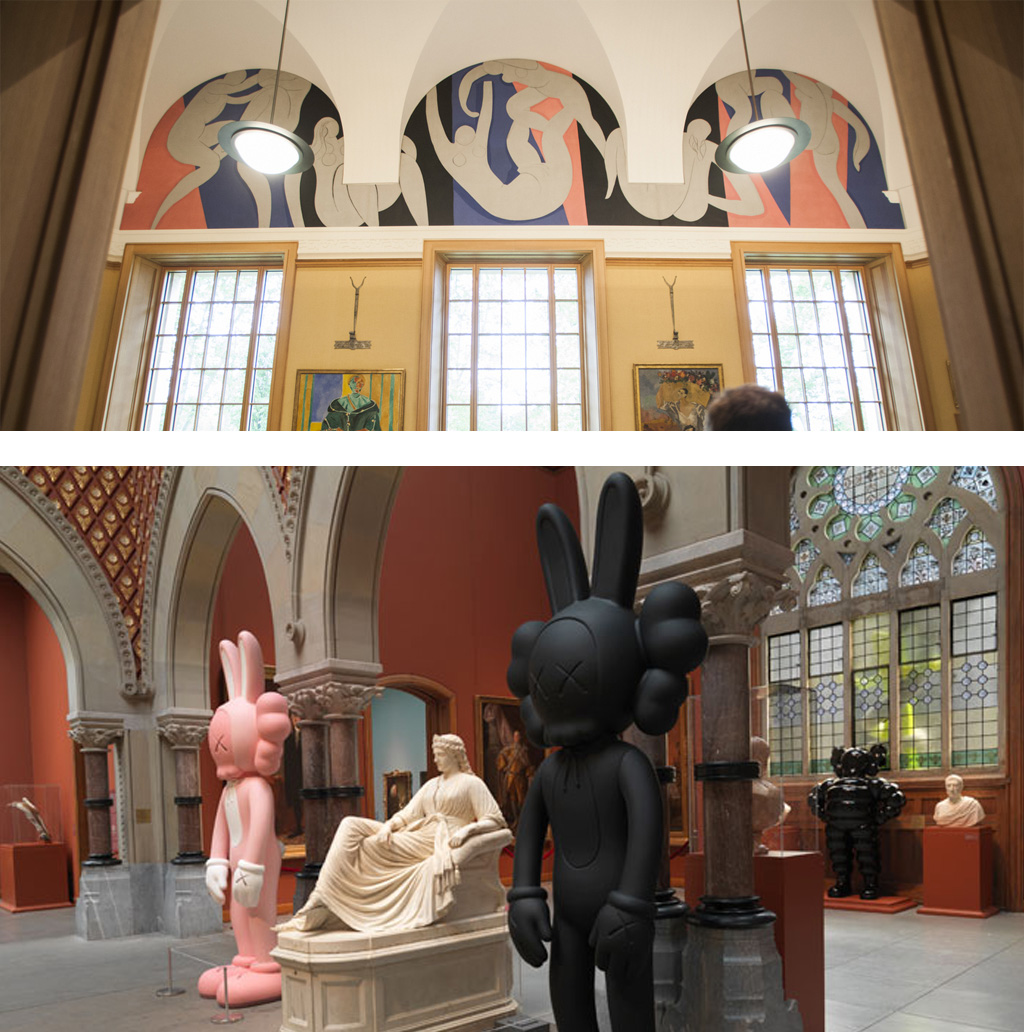 Top: A Matisse mural at the Barnes Foundation; bottom: the KAWS exhibit at the venerable Pennsylvania Academy of the Fine Arts.

On weekends, Murray and his young family — a newborn will soon join his 16-month old daughter in toddling around town — can be found visiting the statues and fountains of Rittenhouse Square, which repeatedly shows up in lists of the nation’s best urban parks. For adults-only time, “there’s plenty of great restaurants, festivals, and cultural activity,” Murray says. “We never feel like we run out of things to do — the art museums alone are fantastic.”

There’s plenty of great restaurants, festivals, and cultural activity. We never feel like we run out of things to do — the art museums alone are fantastic.”

The comprehensive Philadelphia Museum of Art, the third largest art museum in the country, and the all-American Pennsylvania Academy of the Fine Arts, which resides in a stunning heritage building by master architect Frank Furness, are just a start. The Philadelphia Museum of Art stages a major design exhibition every fall and has lots of design programming year-round. A host of specialty collections, sprung from the visionary minds of characters like Albert Barnes (a one-and-only impressionist trove) and the Rosenbach brothers (a delightful cache of manuscript treasures) await, as well.

A Lot More To Explore

Dozens of other museums, a large independent theater scene, acres of green space, and a litany of signature skyscrapers conspire to offer countless more inspiration. Mainly, though, it’s there in the streets, all around you.

The nation’s first “percent for art” program (since 1959) has resulted in an unparalleled assemblage of public art by everyone from Alexander Calder to Claes Oldenberg. Similarly, the pioneering Mural Arts program has adorned more than 3,000 bare walls in neighborhoods across the city.

And, as Belozerova has come to see, idiosyncrasy thrives here. Just check out the mirrored mosaic creations by local legend Isaiah Zagar that create a treasure trail through the blocks off of funky South Street. In a city with great architecture, tours by organizations like Hidden City help highlight lesser known interiors. 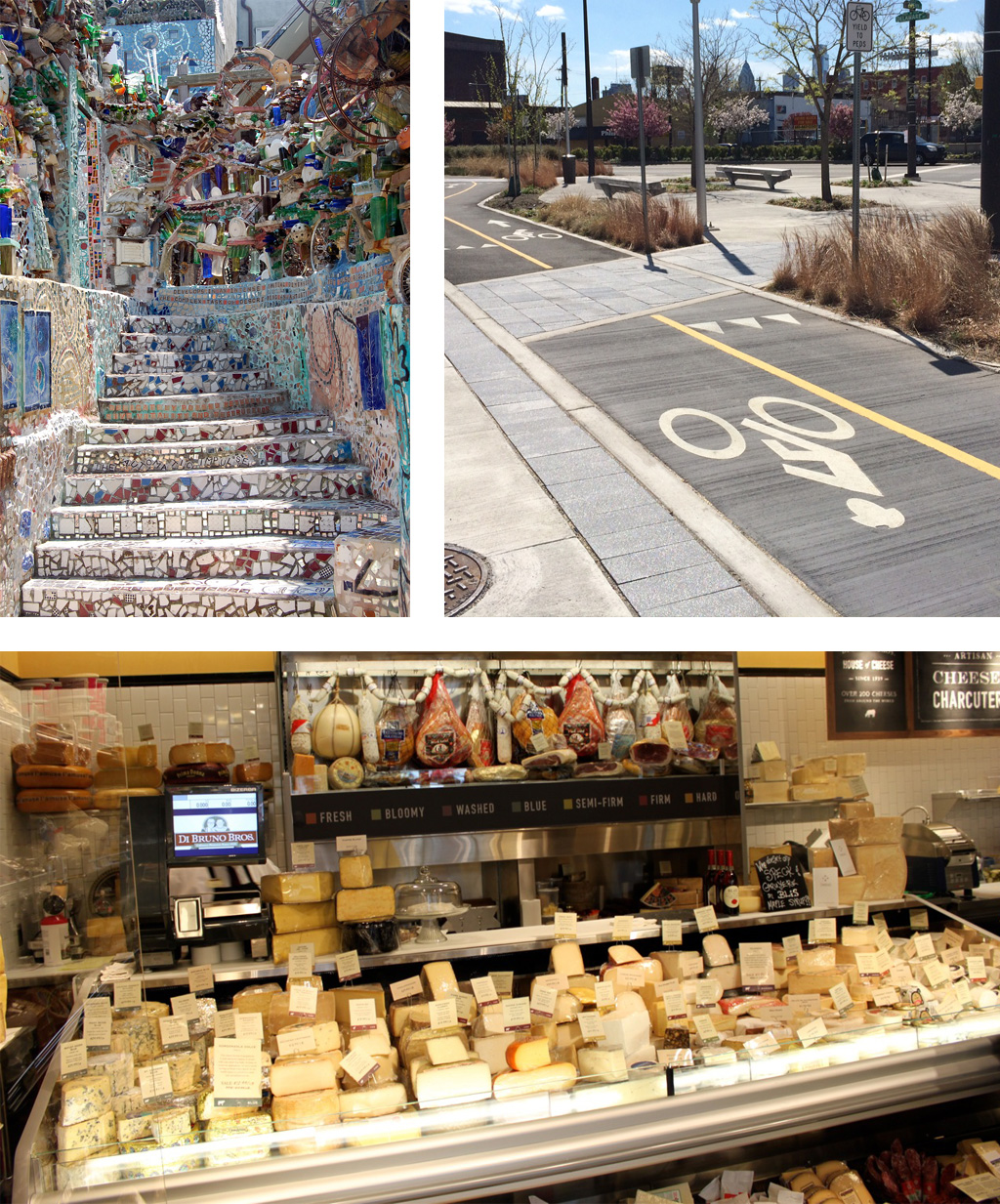 There’s lots more to explore, of course, from pop-up beer gardens and reinvigorated waterfronts to an ever-expanding network of bike lanes and parklets — and soon our very own High Line-style elevated park. Every weekend in the summer, a different fair takes to the street, celebrating the city’s LGBTQ community or presenting the chance to sample from dozens of food trucks.

The everyday serendipity of big city life is where Philadelphia really excels.

All year round, citywide festivals that have become institutions reveal new delights and undiscovered aspects of the city. DesignPhiladelphia, the nation’s first and largest festival devoted to design in all of its myriad forms is iconic; but Philly Beer Week, the Philadelphia Film Festival, the Fringe Arts Festival, Philly Tech Week, Philadelphia Open Studios Tours and the Philadelphia International Festival of the Arts, can hold their own.

The everyday serendipity of big city life is where Philadelphia really excels. Walking around the Italian Market the other day, Belozerova stopped to buy some exotic sausage from a game vendor whose family has been doing business there for decades. “The guy’s wearing a bloody apron and leaning over a crumbled marble countertop and he’s like, yeah, that’s rabbit and that’s boar,” she recalls. “If this was some hipster place in Chicago, it would’ve been ‘. . . and let me tell you about these artisanal mustard seeds that bring a hint of pepper to the blah blah. …’ But in Philly,” she laughs, “there’s nothing precious about it.”