Freedom‘s legacy product, the original TOPAZ video magnifier, helped people a great deal by facilitating reading, but the company knew there was potential to do even better.

Ethnographic research uncovered opportunities to improve workflow, add new features to solve common frustrations, and design more intuitive controls for increased ease of use. It also revealed the need for a portable version, TOPAZ Portable PHD, that we developed for the business traveler and student on the go.

ONYX Portable HD, Bresslergroup’s latest collaboration with Freedom, is another product for the mobile user. The high-resolution, 3-in-1 portable magnifier shown in the animation above, assists students who need to switch their focus from desk-bound notes to the whiteboard at the front of the lecture hall. A series of inventive technical solutions made this versatile, transportable product possible at a high quality and competitive price point.

When we first started working with Freedom Scientific, we traveled to Florida – the company’s home base – to partner with them in conducting in-home ethnographic research. They set us up with different types of users (from heavy book readers to those who use a magnifier less frequently, for tasks like reading labels and looking up phone numbers).

While observing people in context, we began to understand the nuances of their daily challenges and of the strengths and weaknesses of the legacy product. Our observations, informed by Freedom Scientific’s firm grasp on its market and on our own product design and human factors expertise and additional research, drove a crop of new features:

The Challenge: Users struggle to read labels on cans or pill bottles, because cylindrical items often slip out of focus.
Feature Fix: A slot in the table secures a round bottle in a fixed position.

The Challenge: People arrange their settings once and never change them again.
Feature Fix: Instead of leaving all the physical controls front and center, we divided them into basic (frequently used, such as brightness and zooming) and secondary (those they set and forget), and placed the latter beneath the device. This makes the basic controls easy to find and lessens the chance of accidentally changing desired settings.

The Challenge: Users were leaning in too closely to the screen to read, sustaining ergonomically risky postures.
Feature Fix: We improved screen adjustability, including moving the monitor closer so the user can read while still enabling full extension of her hands and arms beneath the desk.

The Challenge: If an item slides off the table or is accidentally bumped out of position, which happens often, users easily lose their place.
Feature Fix: The Freeze Frame feature, enabled by a prominent Freeze Frame button, locks an image in place.

The “toyish” look of TOPAZ II’s control panel is driven by users’ cognitive strengths – many people with low vision differentiate color more easily than shapes. We also refined the controls’ tactile profiles so each feels different, making it easier for color-blind users to tell them apart.

When we surveyed the users’ children and caretakers, they indicated the desire for a new look and feel. Competitive products were sleek, black, and silver, resembling consumer electronics. Along with our client, we felt the TOPAZ line would benefit from differentiating itself with a softer, approachable, and more playful look while providing significantly improved functionality and usability through its new features.

The insights we gathered while developing TOPAZ II informed the development of TOPAZ Portable PHD and ONYX Portable HD.

TOPAZ Portable PHD is a lightweight (ten-pound) magnifier that sets up easily in less than a minute and folds away just as easily, like a laptop. It benefits from TOPAZ II’s functionality and usability improvements.

The TOPAZ Portable PHD launched in 2014 at a substantially lower cost than competing devices at its scale and with comparable features, offering further freedom and independence to this often overlooked user. It took home a Gold in Appliance Design’s 2015 Excellence in Design Awards.

ONYX, a foldable high-magnification camera for students in classroom settings, is the most recent release. The two-position device is mechanically rigid and sturdy – and able to withstand bumps to the desk on which it rests – despite considerable constraints, including its multiple joints and a heavy, high-resolution camera at one end.

The complexity of ONYX presented many technical challenges. A lot of ideation and prototyping was required to solve the riddle of how to enable wire management through joints that need to maintain a large range of motion. Bresslergroup’s engineers also ideated around the design of joints that don’t require much force to unlock.

The simple, clever folding mechanism that resulted works quickly, easily, and intuitively in a way that preserves the product’s brand language and personality. (ONYX shares TOPAZ’s friendly, playful design language.) The head, legs, trunk, and arm are differentiated to make set-up and operation easier for a low-vision user.

The amount of force and torque on the main joint requires the use of strong, wear-resistant materials, but the portability requirement drove the use of lighter materials elsewhere. The resulting range of materials and manufacturing processes necessitates the use of different manufacturers, and each has a different set of tolerances. ONYX’s folding mechanism adds another level of complexity to the tolerance stack-up. Our team designed each part within these various sets of tolerances.

The simple, clever folding mechanism works quickly, easily, and intuitively in a way that preserves the product’s brand language and personality.

The high-performance ONYX Portable HD has the same features and better usability than competing products, and sells at a similar or lower price-point. 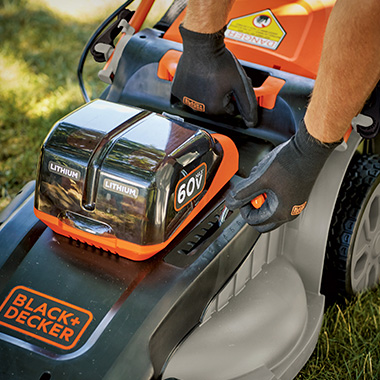 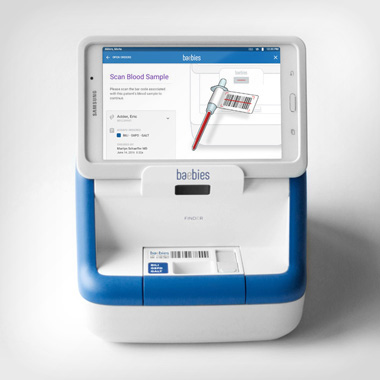 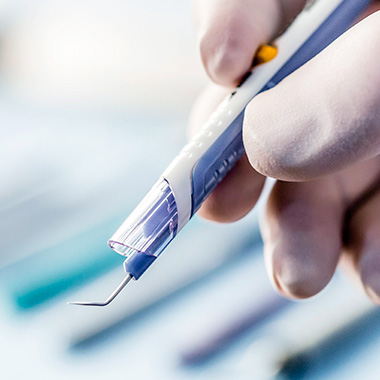